The milking in the pasture

We called the Rodde familiy dairy farm, and Mme Rodde (I assume) told us to hurry on over if we wanted to see the afternoon milking. It started at 3:00 p.m. We were 5 miles south. When we got there we knew we had found the right place, however, because there was a big sign. At the Chamalières farm, I don't think we saw a sign at all... but then we also didn't go into what looked like the sales room to talk to anybody there.

Of course the Rodde family's sign is a little misleading, or at least off the point. It says that Jean-Pierre Rodde produces beef from Salers cattle. We weren't interested in beef, but in milk and then cheese. We stopped and parked, and then Mme Rodde (I assume) came out of a storefront building across the road and told us we needed to drive another mile or two up the road to see the milking — la traite, in French. 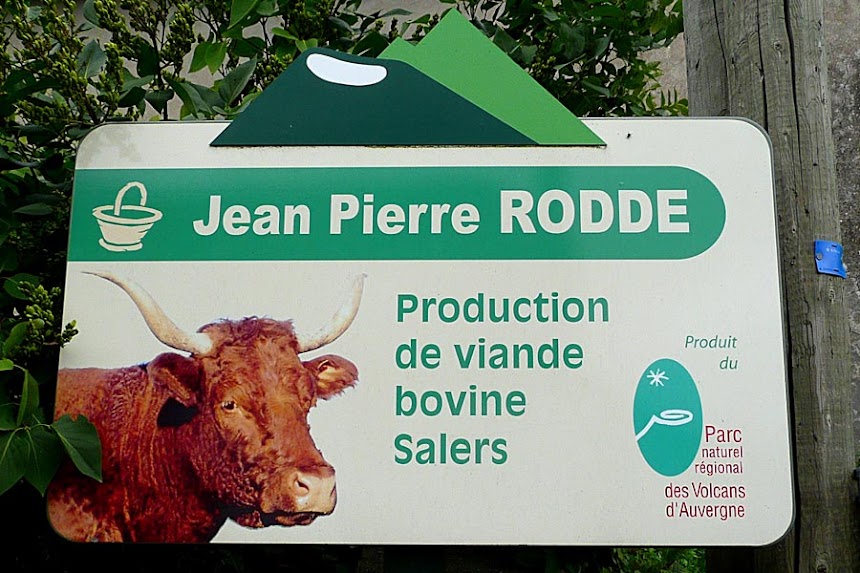 The cows are milked outdoors, in the pasture. Mme Rodde (okay...) said we should drive on past the green barn up the road on the left and then we would see the herd and the milkers. You'll hear the cowbells, and the men shouting, she said. 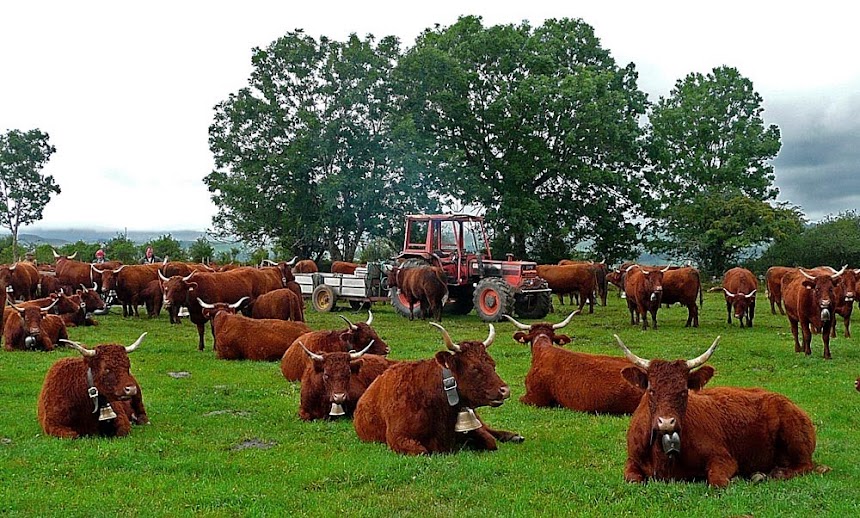 If we had been driving in the opposite direction,
we would have spotted the herd right away.

Well, we didn't see or hear anything. We drove right by and went too far, but we realized it after a mile or two and turned back. On the way back, we could clearly see the herd of cows, and we realized that must be it. Driving by in the other direction, the herd and the milkers had been hidden behind a hill, and we hadn't thought to look back over our shoulders as we drove past. 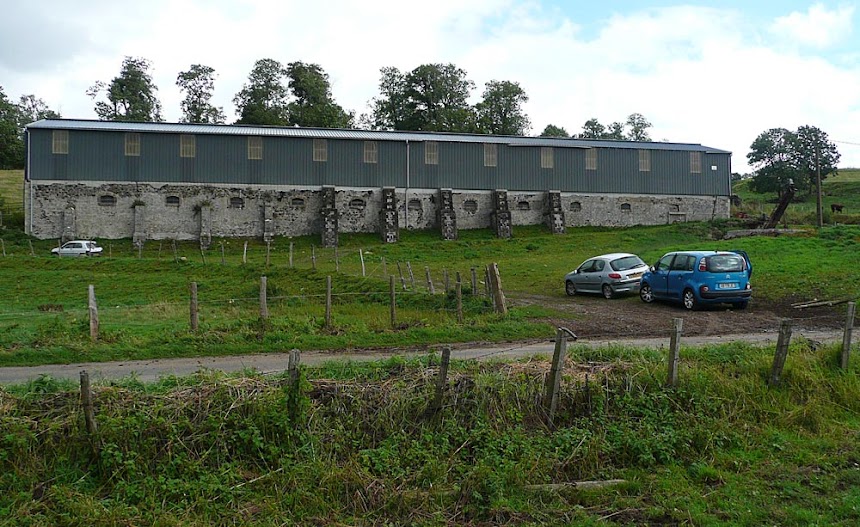 It was kind of muddy where we parked the cars.
No surprise, I guess.

This time, we parked our cars across the road from the pasture where the herd was gathered, in front of a long building that must be where the cows are kept during the cold months of winter. Where we parked was kind of muddy, and we stepped carefully when we got out of the cars. It wasn't too bad. Dark clouds were gathering on the horizon, so we all scrambled to get our rain gear out of the trunks of the cars. 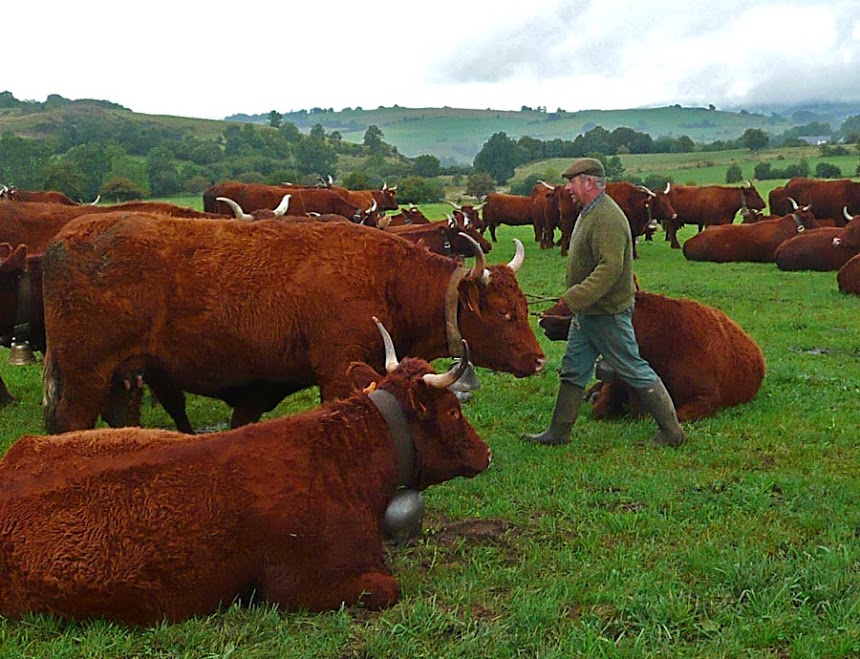 Is this man shouting?

We were still hurrying because the milking was already under way. We didn't hurry for long, however, because we had to step carefully as we crossed the 50 or 75 meters of pasture we needed to cross to get close to the cows. The field was littered with cowpats... cow pies... pasture pastries. And since it had been rainy for a couple of days, they were wet and slick. 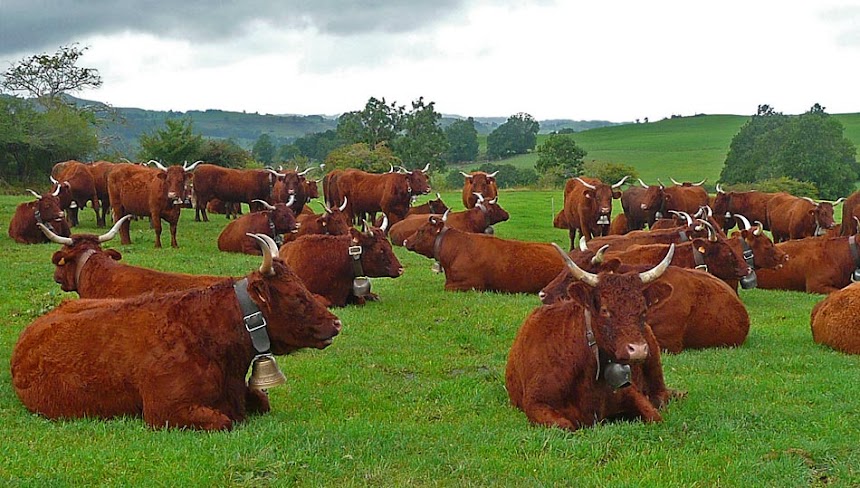 A bucolic scene. Or should that be "a bovine scene"?
And look at those big cowbells.


There was some mooing but mostly the cows were quiet. They weren't moving around too much, so the bells they wear were fairly quiet too, compared to the music the bells make when the herd is hoofing it across a field. There wasn't much shouting either, as far as I can remember. Mostly, we heard the tractor engine, which powered the electric milking machines that Mr. Rodde and his cowhands were using.


A video I made at the milking. That's my voice,
the bells, and the tractor engine.
3 September 2009


Yesterday I read on Wikipedia's French site that one of the quirks of Salers cows is that they will only give milk in the presence of their calves. Well, in a wooden corral, separating them from their mothers, were gathered dozens of reddish brown calves. Once in a while, one would be let out of the corral and go to its mother to nurse. Here you can see the milking machine hooked up to a cow.

Do calves "nurse"? Maybe they "suckle." I assume the calves know how to identify their mothers, and vice-versa. Maybe a quick suckle by the calf is sometimes needed to start its mother's milk flowing. This particularity of the breed may explain why much of the milk used to make Salers cheese is not actually the milk of Salers cows, but another breed. More about that later. 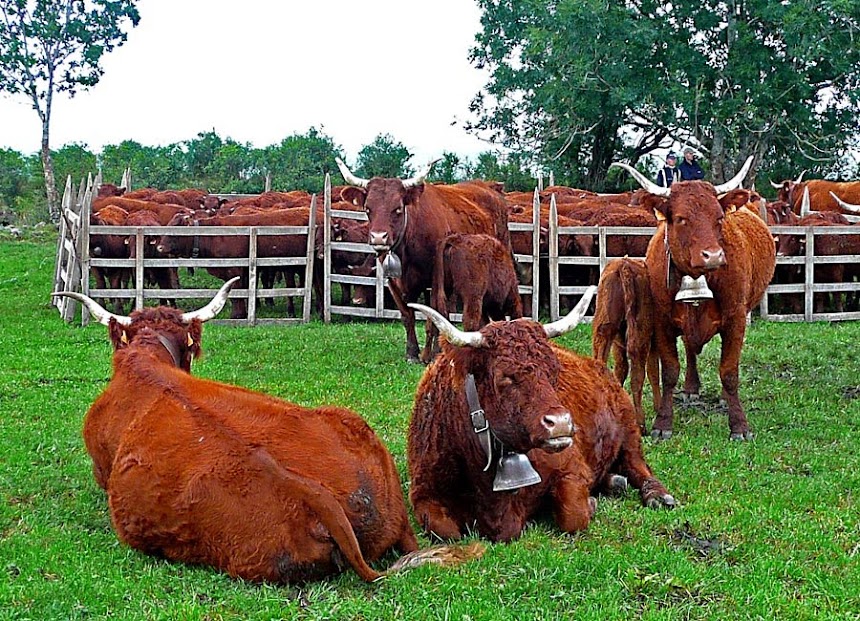 The calves were in a corral near the cows.

At that point it really started raining. We hustled back toward the cars as quickly as we could without breaking our necks or getting ourselves too mucked up. We decided to drive on back to Saint-Chamant via the little town of Riom-ès-Montagnes, where we stopped for a bathroom break and went into a bakery to buy some bread and pastries for dinner. We had about two hours to get the dairy farm for the cheese-making session — enough time. 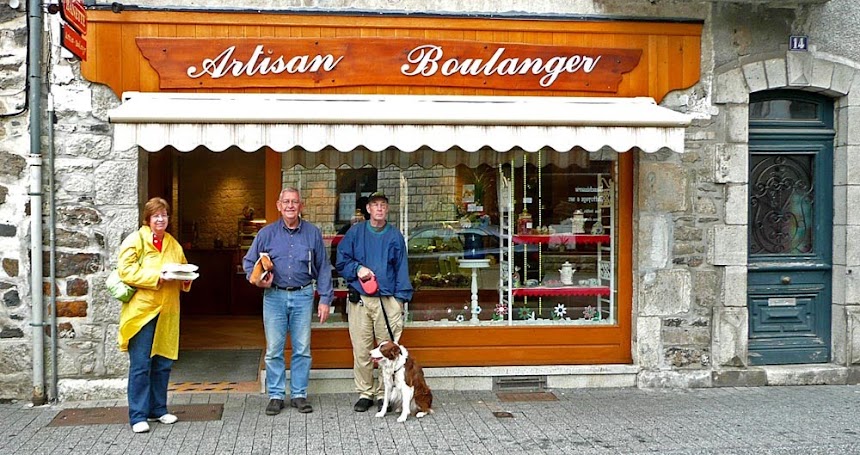 Here we are in Riom, buying pain et pâtisseries.
Thanks to Evelyn for the photo.

And it took us about two hours to drive back to Saint-Chamant on little winding roads. But we got back to the village at 5:45 and let Walt and Callie off at the gîte. Four of us headed in one car for the Conches dairy farm, just a couple of miles north of the village, to see the cheese-making scheduled for 6:00 p.m. I'm glad we did.