I've gone into a lot of detail about that recent Saturday afternoon and evening I spent in Paris, just to try to give the flavor of that kind of adventure in the city. The fun is in the little memorable details. Things I didn't mention: 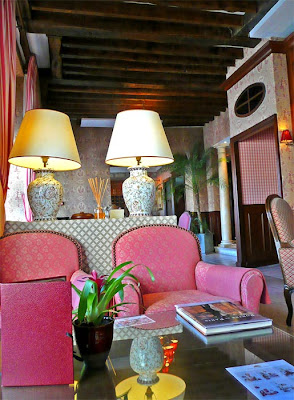 Lobby of the Hôtel du Panthéon
On Sunday, I met my friends over at the Hôtel du Panthéon and we decided to walk to the nearby markets at Place Monge and the Rue Mouffetard. They were feeling slightly jet-lagged still, and arriving back at their hotel at 1:30 a.m. after a day of strenuous walking and dining had taken its toll.

One of us really wanted a croissant and the bakeries around the Place du Panthéon all seemed to be closed on a Sunday morning. At the Place Monge market, a short walk from the hotel, there seemed to be only one vendor selling breads and pastries, and his croissants just didn't look right — they were gigantic and bready-looking. 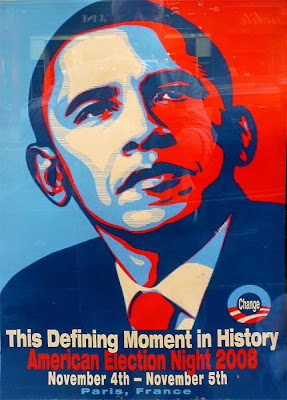 A poster we noticed in the window
of a Paris bookstore
We walked quite a way down the Rue Mouffetard after rejecting those croissants, and we finally found some good-looking ones in a bakery there. Meanwhile, I got hungry and stopped to buy a piece of Cantal cheese in a fromagerie — in anticipation of our upcoming trip to the Cantal department in the Auvergne. I nibbled on it as we walked through the market street. 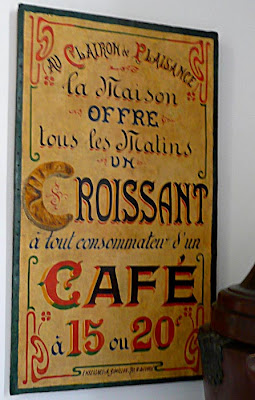 An old sign in the Musée Carnavalet
On a square at the bottom of the Mouffetard market, there was a little musical group playing accordeon music, and couples were dancing. It was very old-style Parisian and kind of hokey, but fun to watch anyway.

We sat down in a café for a cup of espresso and in the distance we could hear what sounded like a church choir singing hymns. That seemed unusual in Paris. But there was a church across the way. The café was bustling with people having either their breakfast or a pre-lunch apéritif. 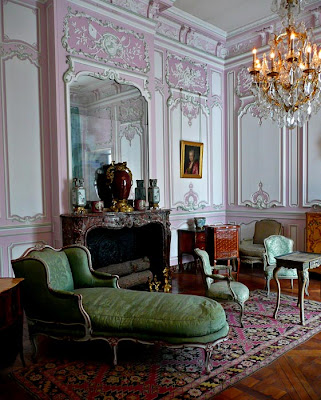 How well-off people lived in Paris in past centuries
(and even now)
After that, we took a bus for a ways, and then we walked across the river into the Marais neighborhood. We wanted to go to the restaurant called L'As du Fallafel and have a fallafel sandwich. Many Americans who participate in travel forums on the Internet dealing with Paris and France rave about the sandwiches at L'As, as they call it.

The line was long but the wait was only about 5 minutes. It's a take-out place. I have to say the fallafel, served in a pita bread with cabbage salad (cole slaw) and hot harissa sauce, was really good. We carried the food over to the Place des Vosges and found a bench in the park where we could sit and eat our picnic lunch, taking advantage of the people-watching and warm sunny weather. 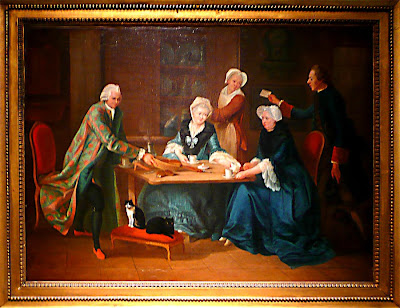 Portrait of an 18th-century Paris family
After lunch we spent an hour or two in the Musée Carnavelet, which is free and is the museum of the history of the city of Paris. There are replicas of rooms full of furniture from centuries past, a lot of old Paris street signs, and an extensive gallery of paintings — not to mention a nice garden.

It was getting close to dinner time. CHM was coming to the restaurant with us all, as was Claude of PhotoBlogging in Paris. Evelyn was looking forward to meeting both of them, and Marie, who already knew CHM, was happy to meet Claude, because they have mutual friends in the English-teaching profession. I was glad to be with a nice group of friends new and old. 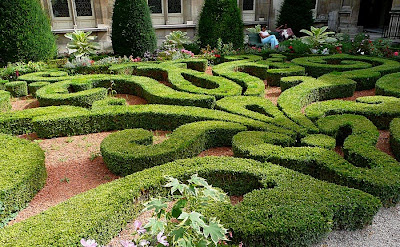 Sculpted boxwood at the Musée Carnavalet in the Marais
For our Sunday dinner we had chosen the restaurant called La Fontaine de Mars, partly because it's the restaurant where Michelle and Barack Obama had dinner out when they were in Paris back in June. After the afternoon in the Marais, I went back to CHM's place at around 7:00 and he and I got a taxi over to the Fontaine de Mars, which is on Rue St-Dominique in the 7th.

The dinner was a lot of fun. There were seven of us around a big round table up on the second floor of the restaurant. Claude and I had salads of leeks in vinaigrette as our appetizers, and then Claude, Marie and I had a dish of boudin noir on a bed of sautéed apples. Boudin noir is called blood sausage or black pudding in English, and it was delicious with the apples and a salad of frisée lettuce — curly endive. 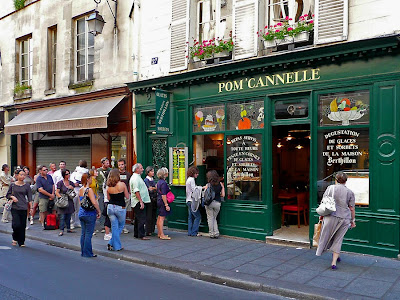 People waiting in line to buy a cone of
Berthillon ice cream on the Ile St-Louis
Others had other appetizers — I didn't take notes — and then some had the plat du jour, which was roast chicken with mashed potatoes, as their main course. Or fish. CHM had a light dinner of œufs en meurette — poached eggs served with carrots, onions, and pork lardons (bacon) in a red wine sauce. He said it was delicious.

We had much lively, even boisterous conversation about blogging, all kinds of technology from Kendalls to digital cameras to iPhones, and about life in Paris and our travels in France. As I said, it was a lot of fun and the food and wine were good. The evening was a great way to wrap up our weekend in Paris. Here's a link to a picture Claude took during dinner and posted on her blog.
Posted by Ken Broadhurst at 07:41