We got our 10-year resident's cards yesterday. Before the people at the village hall could hand them over, we had to go to the Trésorerie -- the tax office -- in Saint-Aignan and buy two tax stamps for 70 euros apiece. That's the fee for issuance of the cards. It was easy, and the cost is pretty low when you think we are now set for 10 years. The one-year cards were always free.

The carte de résident, as opposed to the annually renewable carte de séjour temporaire we have had since 2003, is also a work permit. It gives us the right to seek gainful employment. Neither of us plans to do so, but it's important to have the right to work, I suppose. You never know. Now we have no excuse to give when people ask: "Are you thinking about looking for a job?" 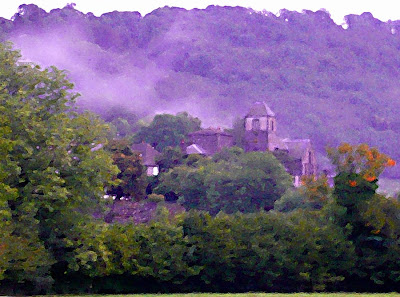 The church in Saint-Chamant on a foggy morning
What has surprised us is that the French administration granted us the 10-year cards and work permits without asking us for any documentation beyond what we had already supplied for the 1-year cards. And without asking us to come in for an interview to see whether we actually speak French and understand the ins and outs of French government and society.

The mayor's recommendation obviously means a lot — everything, in our case. She is our neighbor, and we have known her ever since we arrived in the village in 2003. (She is not the mayor of Saint-Aignan, but of the neighboring village that we live in, population 1000.) She has told us that she filled out a lengthy questionnaire about us in support of our application. 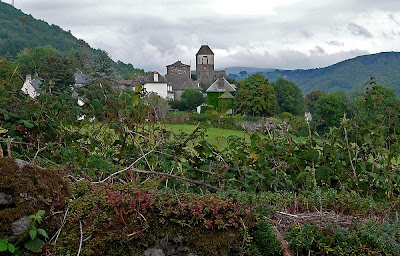 A view of the village from the house we stayed in
The next step in our immigration process would be applying for French nationality. We don't currently have any plans to do so. As Americans, we can get French nationality without giving up our American citizenship, but it's a complicated and long, drawn-out process.

The alternative is to wait 10 years and then get the next resident's card, which in theory will be permanent, with no expiration date. Renewal of the resident's card is automatic, as far as I know, unless the holder has come to constitute a menace to the public order or has committed a crime. 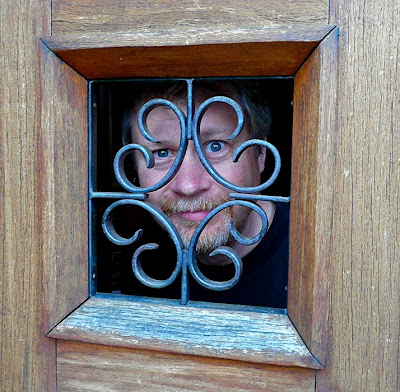 Walt on the inside looking out
The only right we don't have at this point is the right to vote. We are permitted to own property, pay taxes, and work for a living. We both have a French driver's license. I need to look into the question of voting. It might be that the resident's card allows its holders to vote in local elections, but I haven't asked that question or done the research.

France is in a strange situation as concerns the residency and integration into French society of English-speaking immigrants. Americans and other non-Europeans (Canadians, Australians, etc.) have to meet a different standard compared to British immigrants. 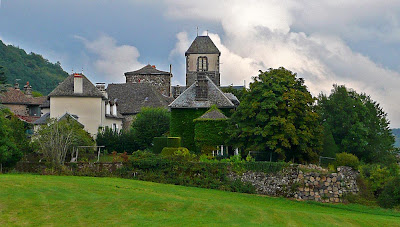 Big clouds on the horizon, over the volcanoes
The British are Europeans and, as such, they — and all citizens of European Union countries — are free to come live in France without any administrative formalities or requirements. They don't have to speak French. I don't begrudge them that right... but it is interesting that there's a double standard when it comes to English-speaking immigrants, in light of the French government's goal of integrating new arrivals into French life.

Many of the British immigrants living here speak little or no French. They can't fully participate in local life. They say there are entire villages in the Dordogne that have been bought up by British settlers, forming separate communities. Some bring plumbers, electricians, and other tradesmen from the U.K. to renovate the properties they own in France, rather than dealing with local tradesmen and artisans. The reasons for that are mostly linguistic, of course. 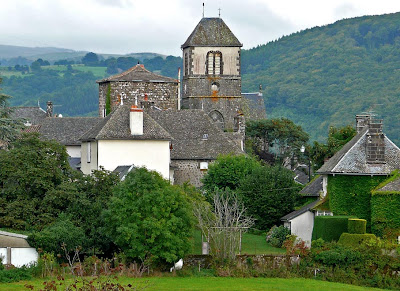 A closer view of the church
With the economic downturn and the greatly reduced value of the British pound against the euro, talk is that some British immigrants in France are starting to sell out and return to the United Kingdom. Their retirement pensions, paid in pounds, are no longer adequate to support them in France. It's hard to find employment if you can't speak French. I don't know if the phenomenon is real or if it's just talk. I do understand the issue, however, since the American dollar has also fallen so low against the European currency.

A few years ago, I read that about half a million British immigrants were living in France. I'm not sure anyone on either side of the Channel keeps accurate statistics. But there probably isn't much to keep many of the British immigrants here in France now that their economic advantage has evaporated. The weather is better in France, and that's one of the factors that spurred the British "invasion" in the first place. But economics were just as important, I believe.

The photos in this post are mostly of the church in Saint-Chamant, a little village in the Cantal we spent a few days in earlier this month. Still to come: Salers, Tournemire, lots of cows, at least three châteaux, and a visit to a farm where Cantal cheese is produced. Plus two or three recipes from the Auvergne region.
Posted by Ken Broadhurst at 08:32