Salers is one of those place names in France that has two pronunciations. Yesterday, for example, I went to the outdoor market over in Noyers-sur-Cher, across the river, to buy some cheese. My goal was goat cheese, and I got three nice pieces, along with a slice of the Auvergne blue cheese called Fourme d'Ambert.

Then I noticed a shrink-wrapped piece of tomme fraîche like one we had bought in Salers. It's cheese to cook with and I'll make something with it later this week (truffade — stay tuned). The wrapper says it's good cheese to put on pizza. 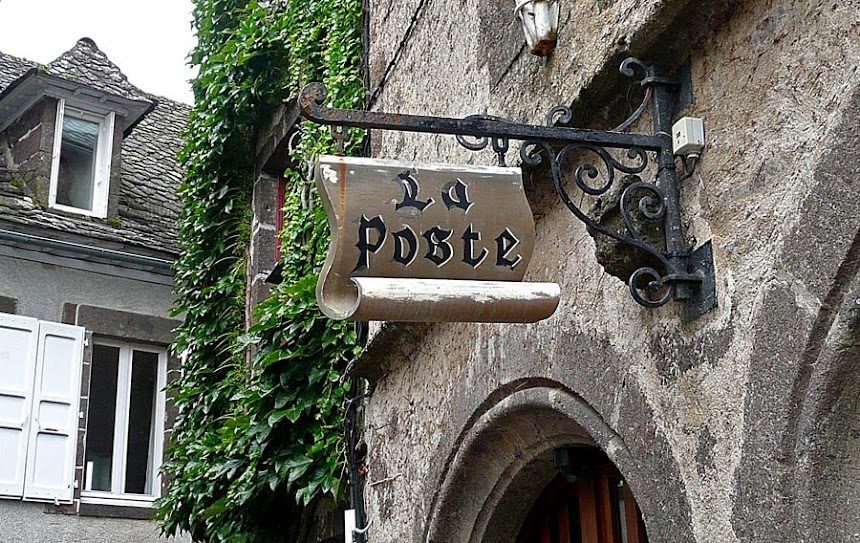 The old post office in Salers
I told the cheese vendor, who is starting to get to know me after two or three years of seeing me occasionally on Sunday mornings, that I had just come back from the Cantal. He asked me where I stayed, and I said Saint-Chamant. He didn't appear to be familiar with that name, so I said it was not far from Salers. 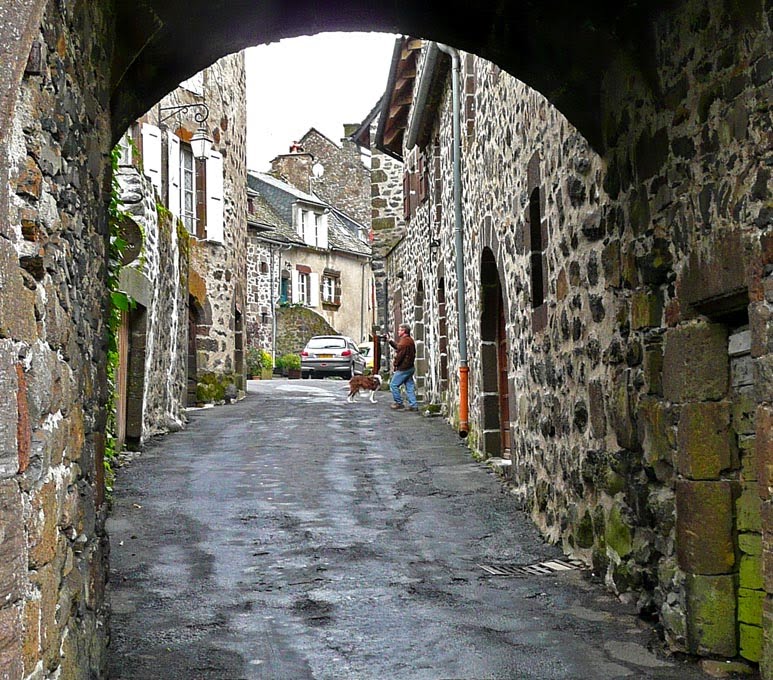 Walt and Callie taking a picture in Salers
His face brightened and he starting singing the praises of the Salers area. How beautiful it is, how green, what good food, especially the cheeses, he said. I told him we had visited a dairy farmer and watched him make Salers cheese late one afternoon. I think he was impressed — or envious. At the least it called up good memories for him. 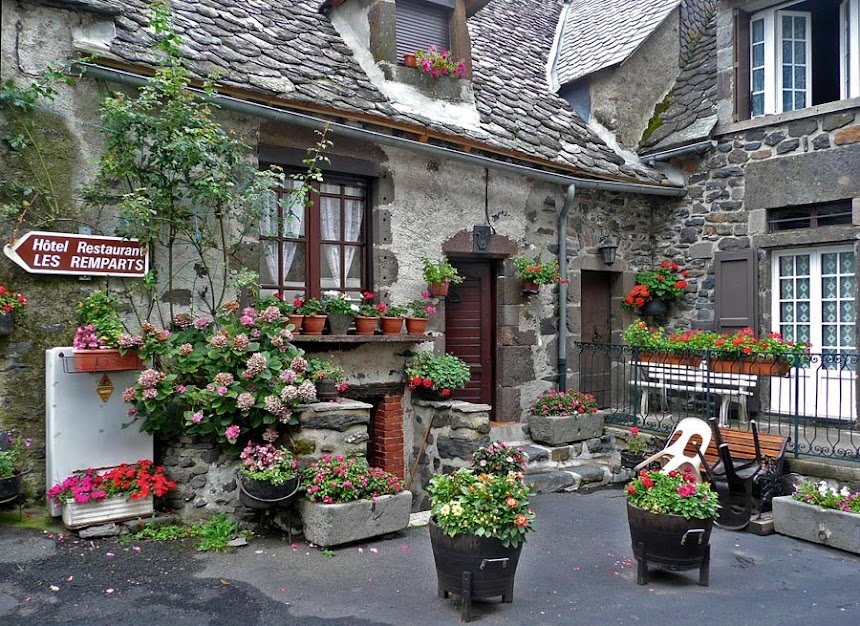 Here's what I meant when I said flowers add color to gray Salers.
Anyway, every time he said Salers he pronounced the final S, saying something like [sah-LEHRSS]. I used to pronounce it that way too, when I lived in Paris. There are a lot of French place names that end in an S where the final S is silent, and a lot where it is pronounced. Everybody knows that Paris is [pah-REE] and Tours is [tour] — those are often-used names. But how many people are sure how to pronounce names like Tournus, Carpentras, Alès, or the Rhône wine villages Gigondas and Vacquéras? S or no S at the end? 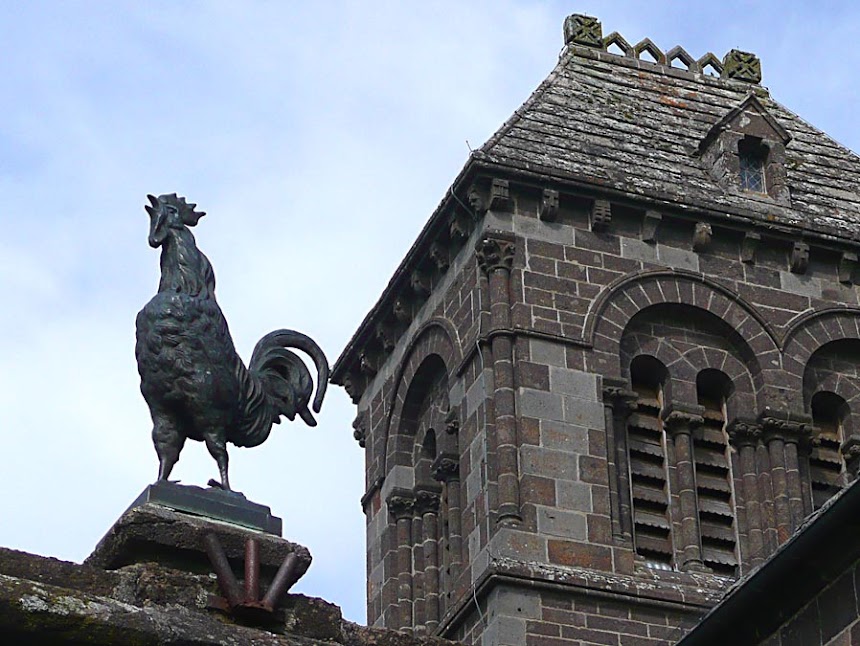 The church tower in Salers and a coq
Once Walt and I went for lunch at a restaurant near Ecole Militaire in the 7th arrondissement in Paris. It was called Le Bistrot de Papa, I think — yep, just looked it up and that's the one. When we went there, one of the specialties on the menu was le bœuf de Salers, steaks of Salers beef. That's what we, or at least I, ordered. I asked the waiter if I should say [sah-LEHR] or [sah-LEHRSS]. He said he was from Auvergne and that down there the final S is silent, but that in Paris a lot of people pronounce it. So you really can't go wrong, I guess. 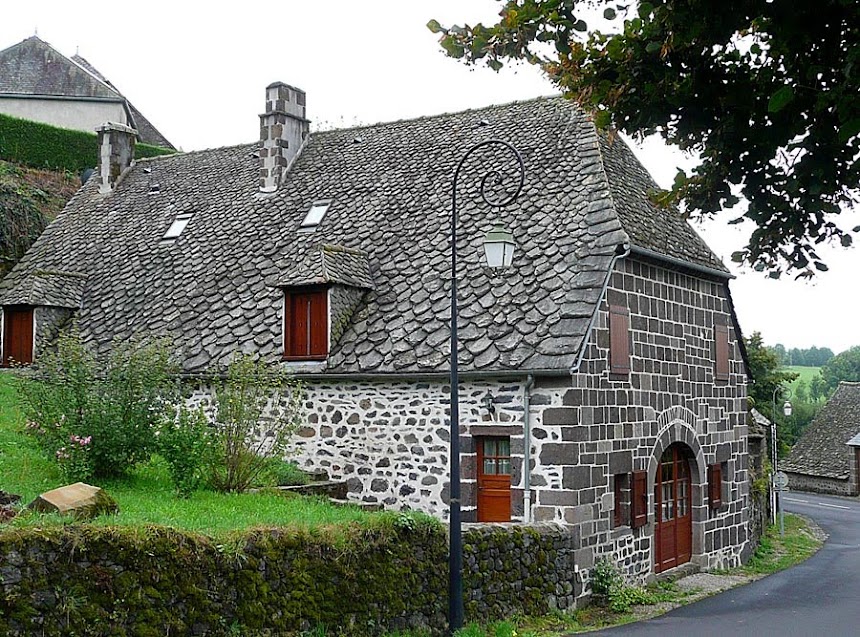 A typical solid-looking house on the edge of Salers
That's what I tell English-speakers who want to know how to pronounce town names that end in an S. Go ahead and pronounce the S. French people will understand you, even if that's not the way they normally pronounce the name. Then listen carefully to see if you can hear the French-speaking person say the name back to you. Imitate that pronunciation. 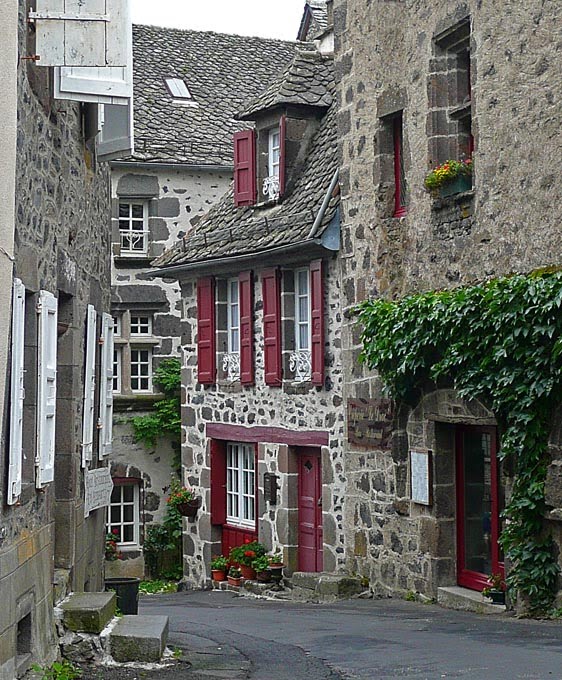 Nice street view in Salers
Well, I got carried away with those pronunciation questions. The pictures in this post are ones I took in Saler' on September 2. It is a very photogenic place.
Posted by Ken Broadhurst at 08:30