On our first day in the Auvergne region, we drove up to the town called Bort-les-Orgues to see the château de Val. CHM had told us about it and recommended it highly, and then Linda who was traveling with us saw it in a guidebook and really wanted to see it.

That morning had dawned rainy and foggy. Our plan for the day was to go over to the old medieval town of Salers first thing in the morning, and then maybe take a drive into the heart of the Parc des Volcans in the afternoon. We wanted to go up the to top of the Puy Mary — puy is an old word meaning "peak" or "summit," and is how the Cantal mountains are named. Puy Mary is about 6,000 ft. tall. A nearby peak is called the Puy Violent. 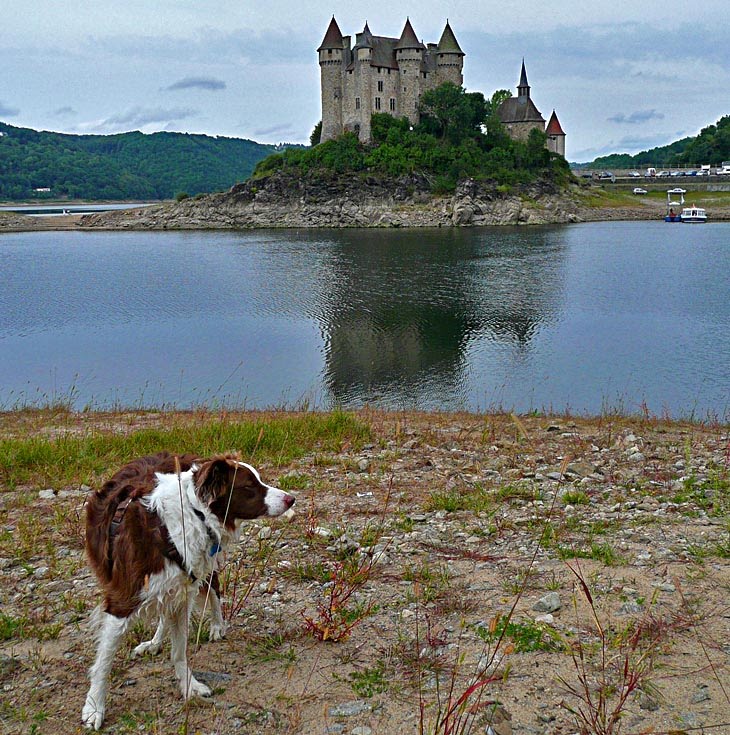 Callie in front of the Château de Val
It was so foggy that morning that we decided to spend the day on lower lands. The château de Val qualified. After walking around in Salers for a while and buying some cheese at the farmers market, we drove up to the town of Mauriac to have lunch. We ended up getting pizzas from what was basically a carry-out joint and sitting at a table out on the sidewalk, under an awning. The other restaurant in Mauriac where we tried to get a table couldn't seat us outside, and it seemed stuffy inside the place. The sun had come out, and we wanted to enjoy it. 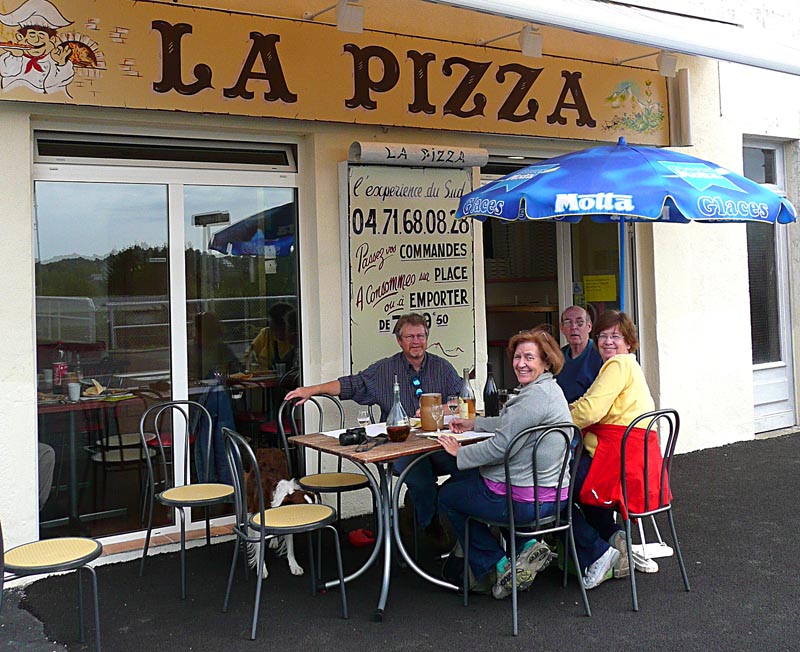 The pizza was delicious and the owner of the pizzeria
was accommodating, funny, and talkative.
The château de Val was built 500 years ago on a rock outcropping that overlooked a deep valley. The Dordogne River flowed down below. In the mid-20th century, a large dam was built just south of the château, on the northern edge of the town of Bort. The Dordogne then flooded the valley, leaving the château de Val sitting on what is a small peninsula, almost an island, surrounded by the waters of the artificial lake. 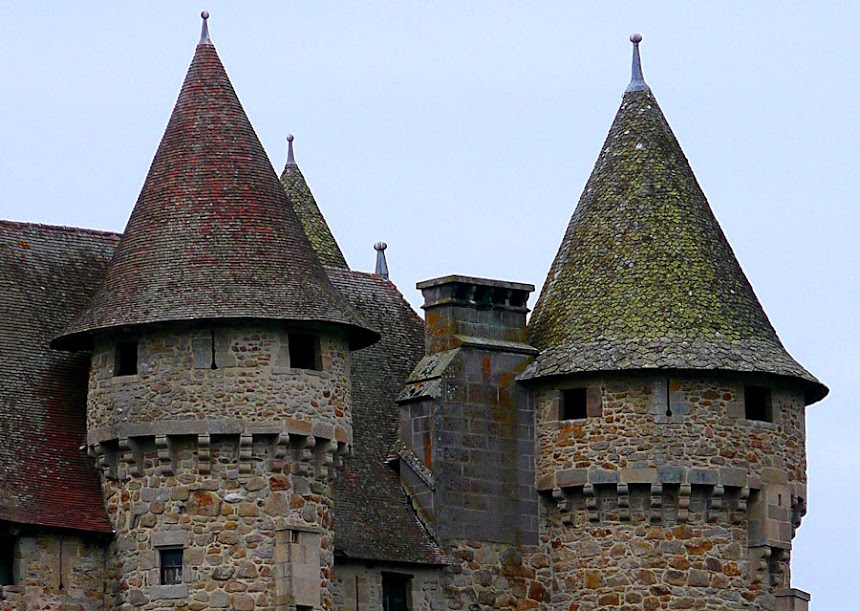 The old towers of the château de Val
with their different-colored roofing
Lewis, Walt, and I, with Callie, walked quite a distance along the shore of the lake to get a view of the château that wouldn't include the boat basin full of pleasure boats at the foot of the building. Part of the walk was on steep paths through woods, and part was over rocks on the shore and even across muddy patches. 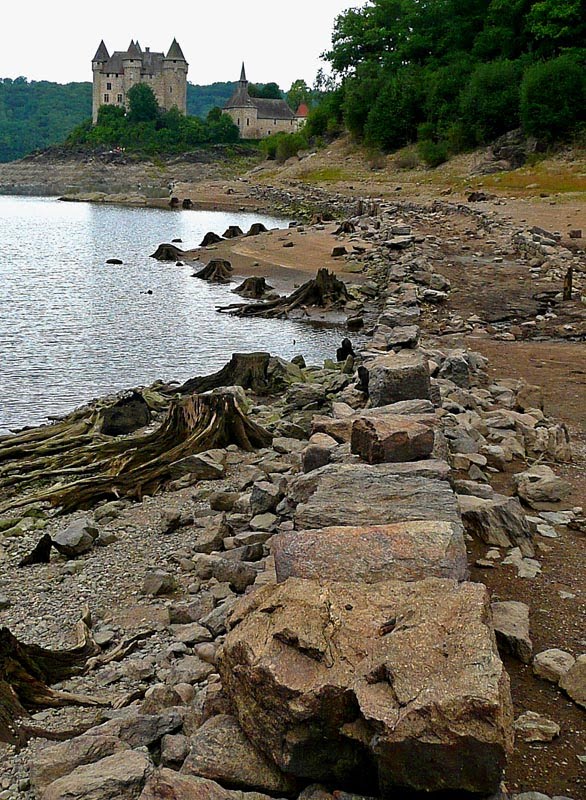 Rocky shores around the lake
We made it, and Callie went wading. The dog had never seen such a large body of water that wasn't salty. She seemed fascinated and kept tasting it with her tongue. Her only other similar experience was on the beach at the Ile d'Oléron, on the Atlantic coast, in 2008, where the salty water surprised her. She was obviously enjoying it, but we didn't want her to get too wet, because we had to put her back in the car afterwards. 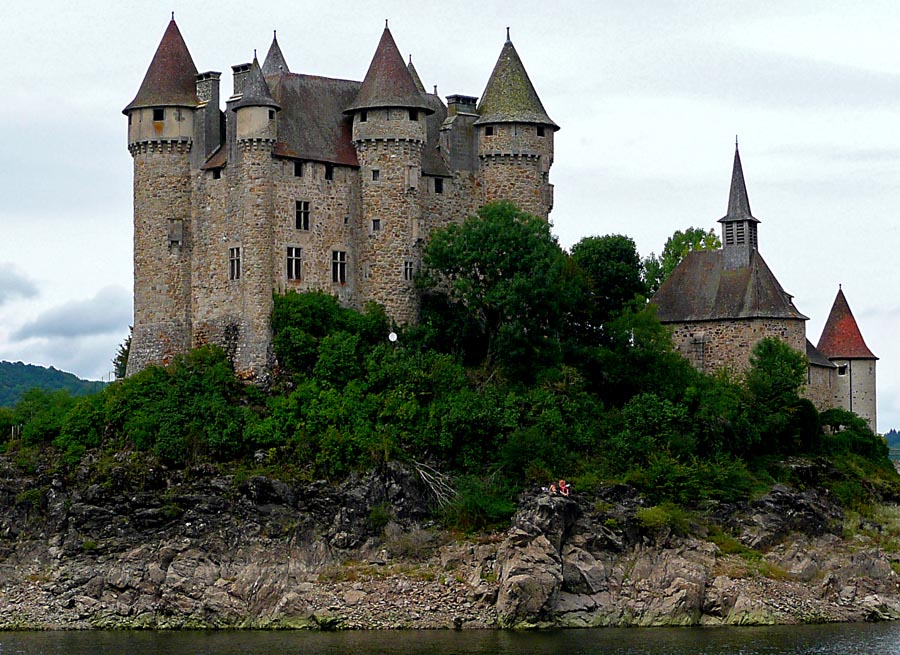 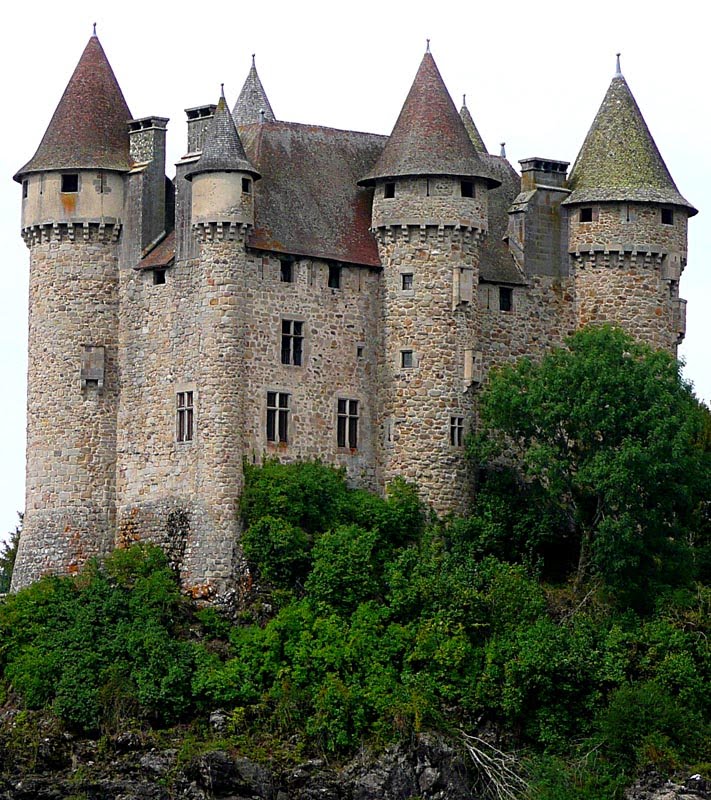 The château from up close

* * * *
We had an interesting Callie experience last night, by the way, in Saint-Aignan. We put her in the car and went into town to have a Monaco (that red drink made with beer, limonade, and grenadine syrup) at the Lapin Blanc café. We were with Bill from NH, who is visiting Saint-Aignan.

As we went to sit down at a table outside, under the café awning, a woman at the table next to ours cried out: "Oh my god, is that Callie the Collie?" And it was, of course. Here's Walt's post about our day.

Sylvia and Paul are Australians from Sydney who have been in Saint-Aignan for nearly two weeks. They picked Saint-Aignan as a destination partly because they had seen our blogs and were attracted to the place. Paul seemed a very distinguished gentleman, and Sylvia was, I must say, quite lissome. It was a pleasure to meet them.
Posted by Ken Broadhurst at 09:02