Salers cheese, made in the area surrounding the old town of Salers — which is now the Parc des Volcans d'Auvergne — is always made with unpasteurized milk. The milk, unheated and unrefrigerated, is made into cheese twice a day, right after the twice-daily milking of the cows. It is the most authentic style of Cantal cheese, which has been made in the area since Roman times.

Cheese is a way of processing milk for long-term storage. You can make it in the summer, when the cows have an abundance of grass to graze on, and you can keep it in a cool dark place — a cellar or a cave — all winter. It will improve in texture and flavor for many months. The land in the Auvergne region was always too hilly and wet to be much used as farmland, but it was and is nearly perfect pasture land. Cheeses have always been valuable commodities in trade with other regions as well. 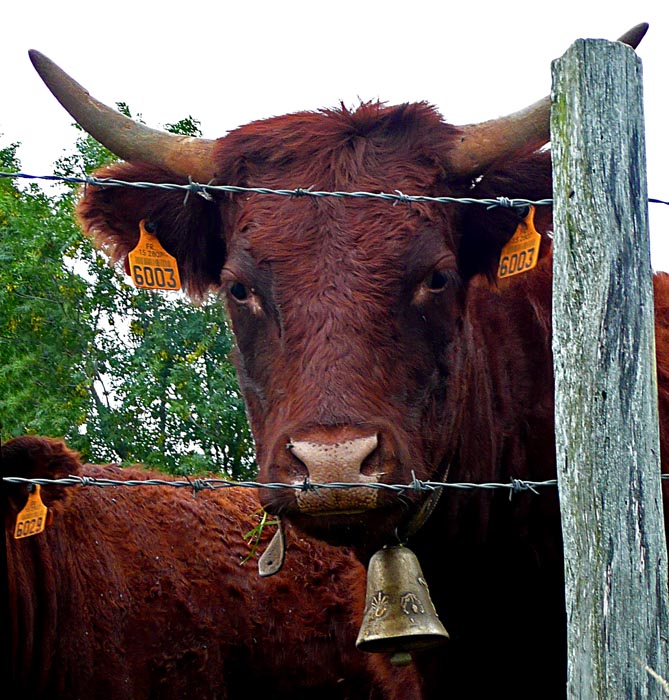 Cantal cheese, which is mostly what you find in France outside the Auvergne region, can be made with pasteurized or unpasteurized milk, and can be made year-round, either in commercial dairies or on farms. Often dairies purchase milk for Cantal cheese from co-ops, so it comes from several different farms. Cantal is the generic form of Salers cheese, which is made seasonally on farms using raw milk from one herd of cows. That's not to say that "generic" Cantal cheese is not delicious — it is, or can be. In order to use the name, farmers and dairies must adhere to certain requirements and methods for its fabrication, too, but the rules are not as strict as for the Cantal label as for Salers label. 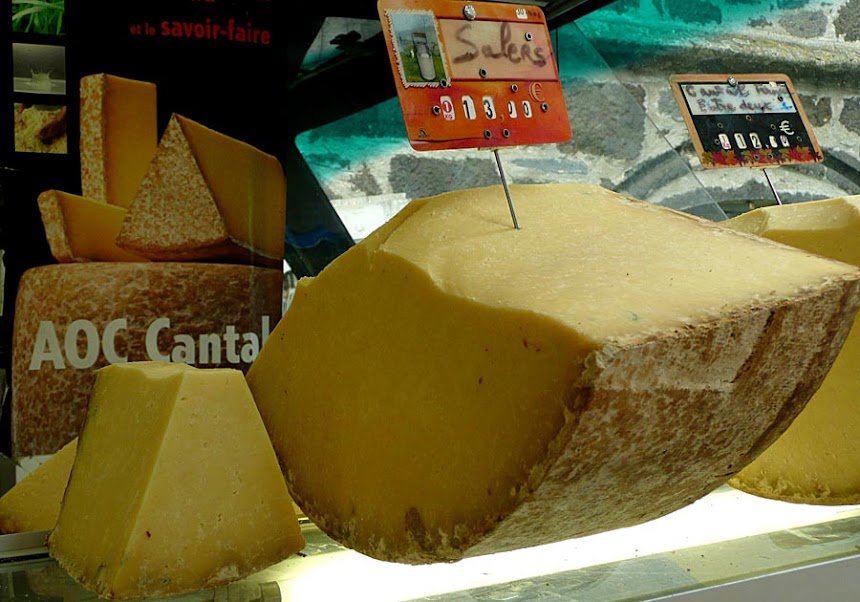 Evelyn took this nice picture of Cantal and Salers cheeses
at the outdoor market in the old town of Salers.

New sanitation and hygiene rules are changing the way French cheeses are made. But traditions remain, and Salers Tradition cheeses, and even just plain Salers cheeses, are proof of that. Modernization is inevitable — on n'arrête pas le progrès — you can't stop progress — but some principles and practices are time-honored. Even U.S. regulations provide that raw-milk cheeses are authorized for importation into the U.S. if they have been aged for at least 60 days. Pasteurization is a good thing, but it's not necessary or even desirable when the milk is going to become aged cheese. 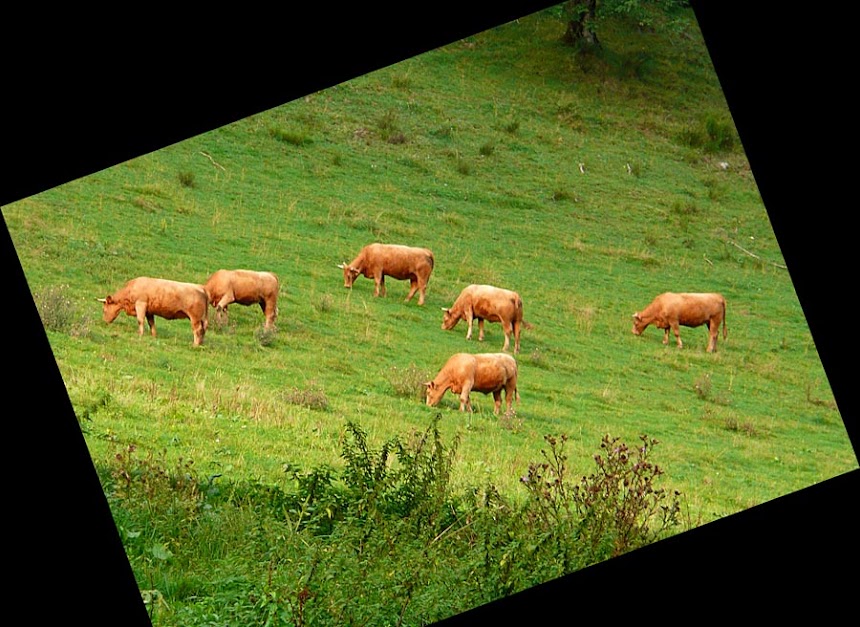 Cows in a pasture near the Château de Saint-Chamant

Salers cheese is aged for a minimum of 90 days. Cheese called just "Cantal" can be sold after just 30 days. That's called Cantal Jeune, young Cantal. Between one month and three, the cheese is called Cantal Entre-Deux, or medium-aged. And beyond three months of what is called affinage, it is called Cantal Vieux — old Cantal. It can actually be aged, or dried, for much longer.

I asked Eric Lafon about affinage, which you might call "maturation" or ripening — keeping cheese at the proper temperature and humidity so that it improves with age — "finishing" it. I asked him if he aged his own cheeses or if a third party was involved. He said he sold some cheese to affineurs — specialists who ripen cheeses before putting them on the market — but mostly he does it himself. Where? He said the assocation of Salers cheese producers has bought an old de-commissioned railway tunnel in the area from the national railroad, the SNCF, and all the producers can store cheeses in there for ripening. 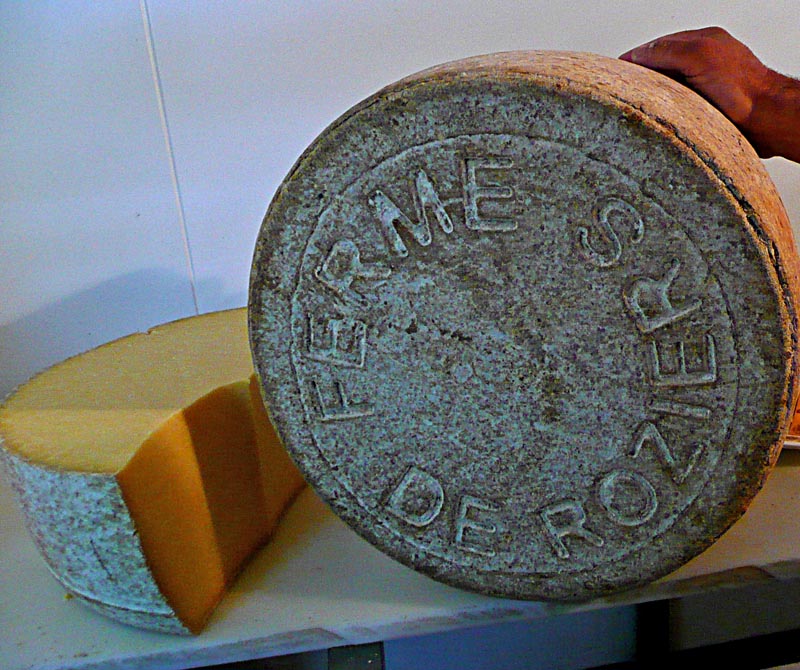 A couple of the Lafon family's farm-made cheeses

Before it matures, Cantal cheese is called tomme (or tome) fraîche — fresh cheese. It is bland, as Evelyn has said, because it hasn't yet been salted. It's used in cooking. Aged Cantal is for eating as it is sold, on a plateau de fromages — a cheese platter. Tomme is for melting, including in the Auvergne specialties called aligot and truffade. Both are potato dishes. You can melt aged Cantal too, and it's very good, but for the purist it's a shame to eat Cantal other than in its natural state. 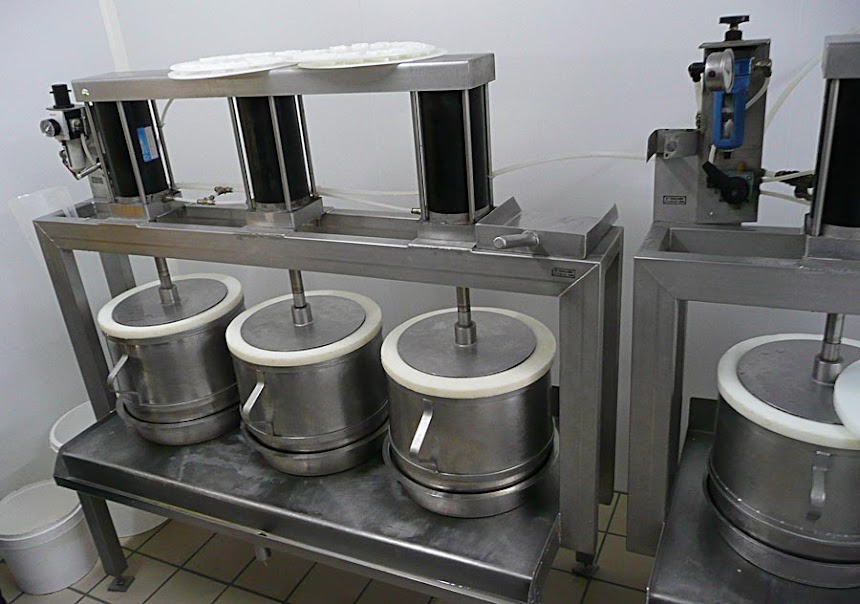 So how does the fresh tomme become Cantal or Salers cheese? After ripening for 12 to 24 hours, the tomme is run through a grinder and mixed with salt. After a few hours the salted mixture is packed into cheesecloth-lined molds and pressed for a couple of days. Then the fat cylinders of cheese are ready for ripening in the cave or cellar. As it ages, the cheese develops a crust that gets thicker and thicker as the cheese dries out. 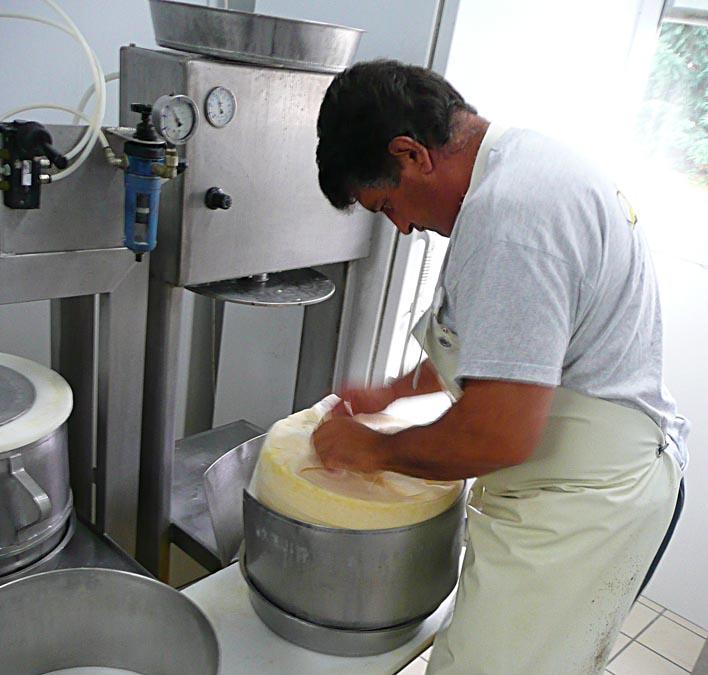 Eric Lafon removes a cheese from the mold
and turns it over for further pressing.

I don't know how easy it is to find Cantal in the U.S. I have the impression that French cheeses are not always kept under ideal conditions as they are shipped and stored for sale over there. Because turnover is slow, they are often too old by the time you by them, and past their prime. But if you choose carefully and have a good cheese vendor, you can find good ones. I used to buy very nice cheeses at a shop on 24th Street in San Francisco's Noe Valley.

In French terms, virtually all the cheeses you find in supermarkets in the United States are "industrial" cheeses. Very few "artisanal" cheeses, made the way Salers style cheese is made, are to be found — except imports. For information, we paid between 10 and 13 euros per kilo — 5 or 6 €/lb. — for the cheeses we bought at the farm and in the farmers' market in the old town of Salers. 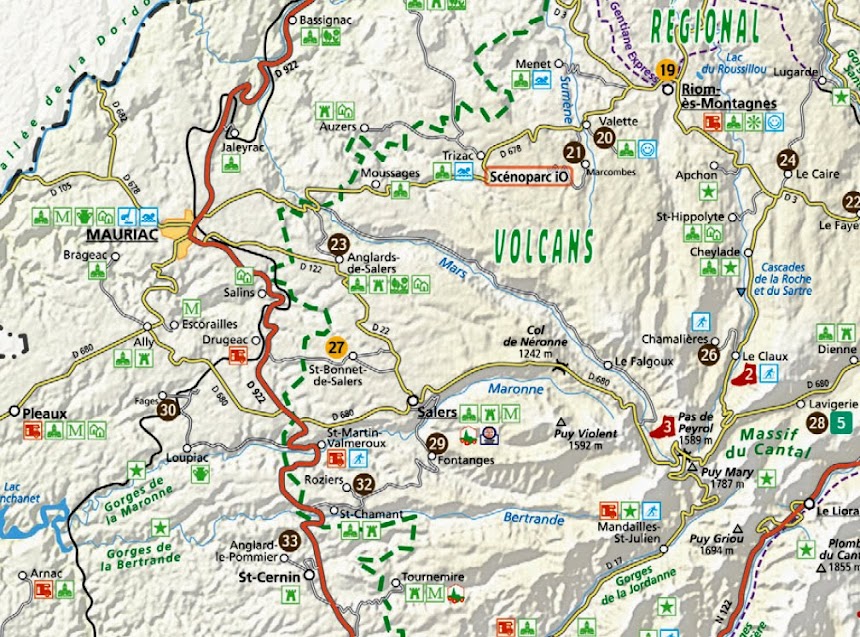 A map of the part of Auvergne we spent our time in,
around Mauriac, and Salers
Click on the map to enlarge it.

One regret I had about our visit to the Conches dairy farm at Saint-Chamant was that Eric Lafon didn't have any of his butter for sale when we were there. After they curdle the milk, they separate the cream from the rest of the whey. With that cream they make butter twice a week and sell it in their store, on the premises. It had all been sold the day we were there.

The Lafon family also sells most of the cheese they make right there in their own shop. Can you imagine how much cheese they make annually? Thirty tons! That's 30,000 kilograms. That's two 40 kg cheeses a day, 365 days a year. They have 50 cows, and each cow gives as much as 10 liters of milk every day.

By the way, Eric Lafon is also the first deputy mayor of the village of Saint-Chamant.

Here are a few links to sites with information about Cantal and Salers cheese, all in French: