Driving to Auvergne and finding the gîte

September 1: The drive from Saint-Aignan down to the village of St-Chamant in the Cantal department was relatively uneventful. The damaged bumper didn't fall off my car along the way. Lewis, driving the rented blue Citroën Picasso, was able to keep up with me, and we didn't get separated. There wasn't much traffic. After leaving Saint-Aignan at 12:30, we stopped at an autoroute rest area for a little picnic. Walt had made a zucchini quiche for our brunch or lunch.

The route took us on little roads out of Saint-Aignan toward the southeast, passing through Nouans-les-Fontaines, Ecueillé, and Levroux. At Brion, we got onto the A20 autoroute and headed south past Châteauroux, Argenton-sur-Creuse, and Limoges. Just south of Uzerche we exited the autoroute and drove along smaller, twisty roads through Tulle and Argentat, in the direction of Aurillac. We had arrived in Auvergne. 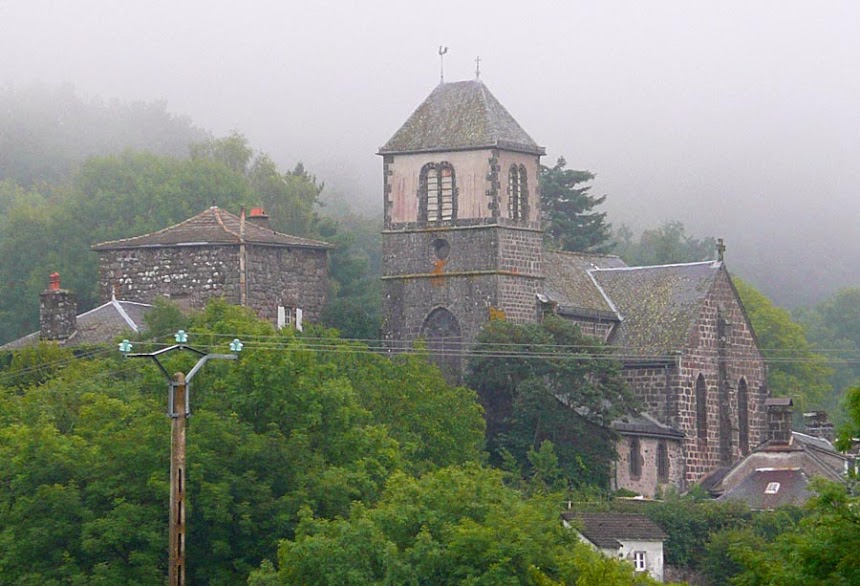 The church in Saint-Chamant (Cantal), seen
from our gîte — through the fog
Our gîte (pronounced [zheet]) or rental house was in the village of Saint-Chamant, just 25 km/15 mi. north of the town of Aurillac, which we ended up not visiting at all, and near the old town of Salers, which we did spend some time in. We did visit the town of Mauriac, about 15 miles north of Saint-Chamant. 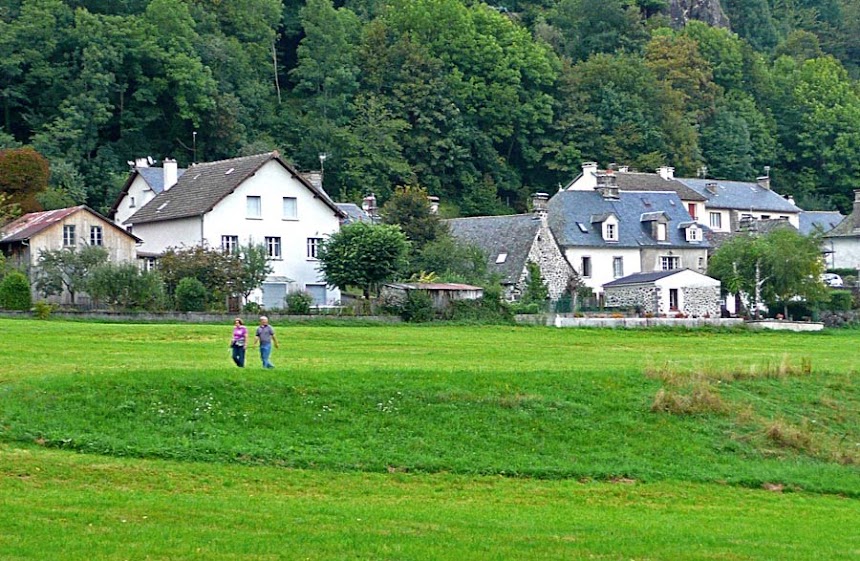 Evelyn and Lewis walking back to the house from the village
The village of Saint-Chamant (pop. 280) and nearby Salers lie inside the Parc Naturel Régional des Volcans d'Auvergne, which was created in 1977. At 4000 km2/1550 sq. mi., the Auvergne Volcano Park is the largest regional park in France. All the volcanoes are extinct — as far as geologists can tell — and the tallest ones reach nearly 1900 meters — just over 6,000 ft. 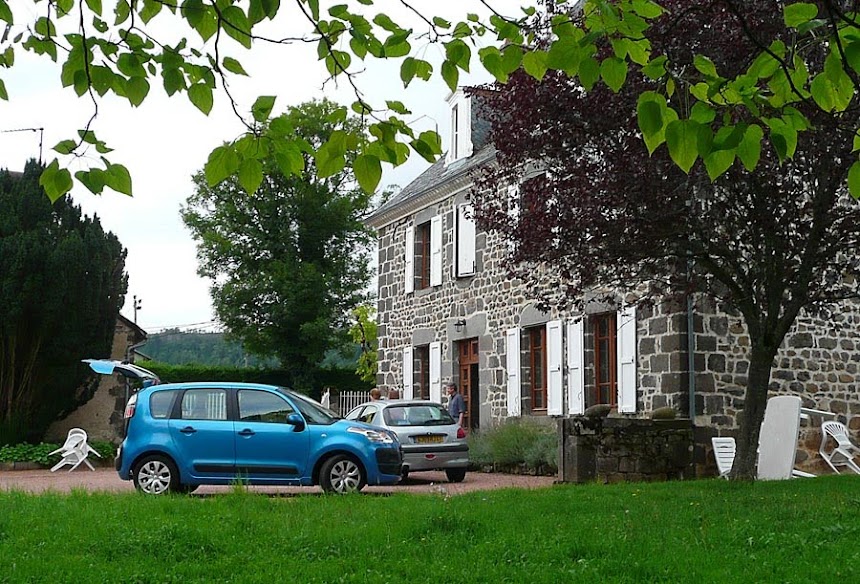 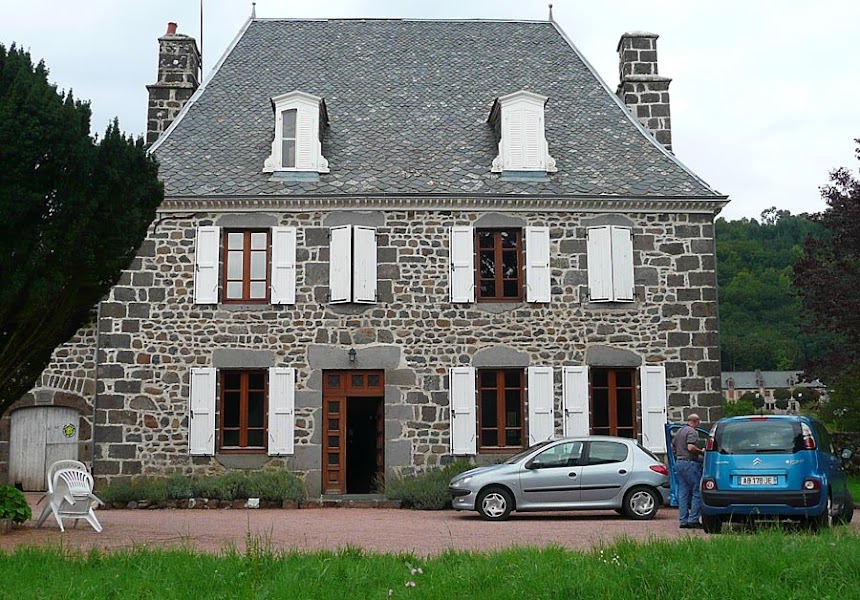 Two photos of the house we rented in Saint-Chamant,
in the Cantal department, for 360 euros/week
When we got to Saint-Chamant at about 6:00 p.m., we didn't have a lot of trouble finding the house we had rented. The owner had told me it was just across the street from the village's athletic field, and there was a sign pointing that way as we drove into town. We weren't sure which house it was, so we called Madame Dauzet on a cell phone and she gave us directions. It turned out we had stopped right in front of the house she lives in. 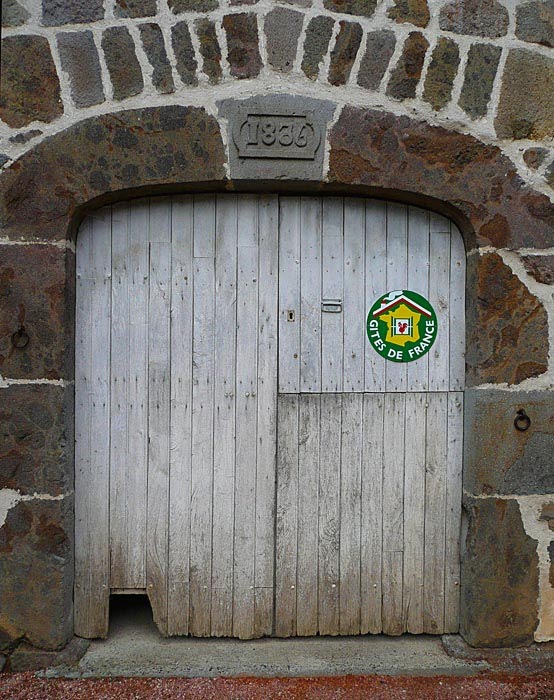 The garage door — the house must have been built in 1836
Mme Dauzet followed us a few hundred yards back up a hill on a narrow lane. Coming to the house from that direction, we could see it in front of us and we recognized it from photos we had seen on the Internet. It only took Mme Dauzet a few minutes to show us around the place, familiarizing us with the kitchen, the furnace, and the fireplace (in case the weather stayed cool). 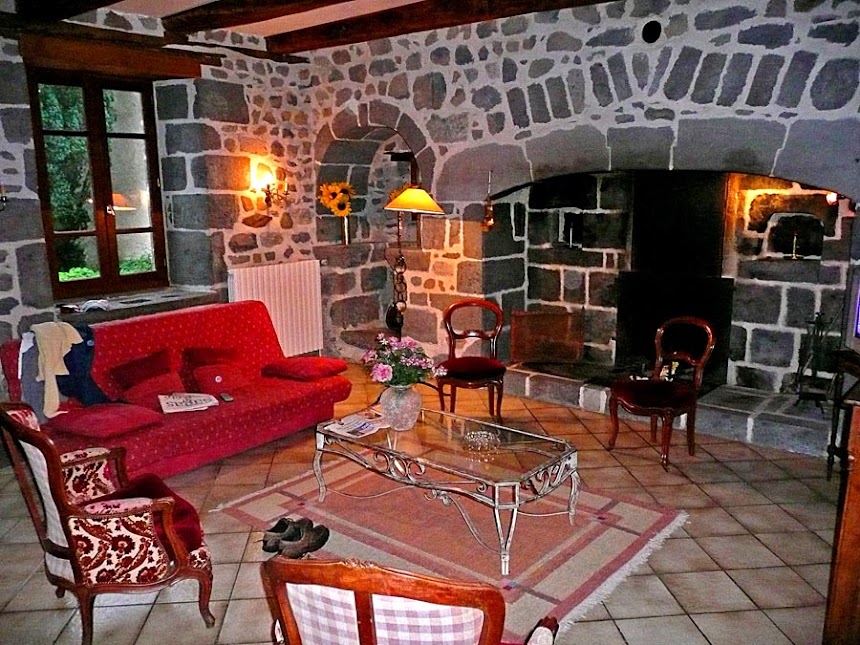 The living room, with its enormous fireplace —
fortunately, it wasn't chilly enough for us to need a fire.
It was foggy and gray outdoors, but it wasn't raining. Night was falling. The landscape reminded me of being in the Appalachian Mountains in the U.S. — West Virginia, for example, or the mountains of North Carolina. 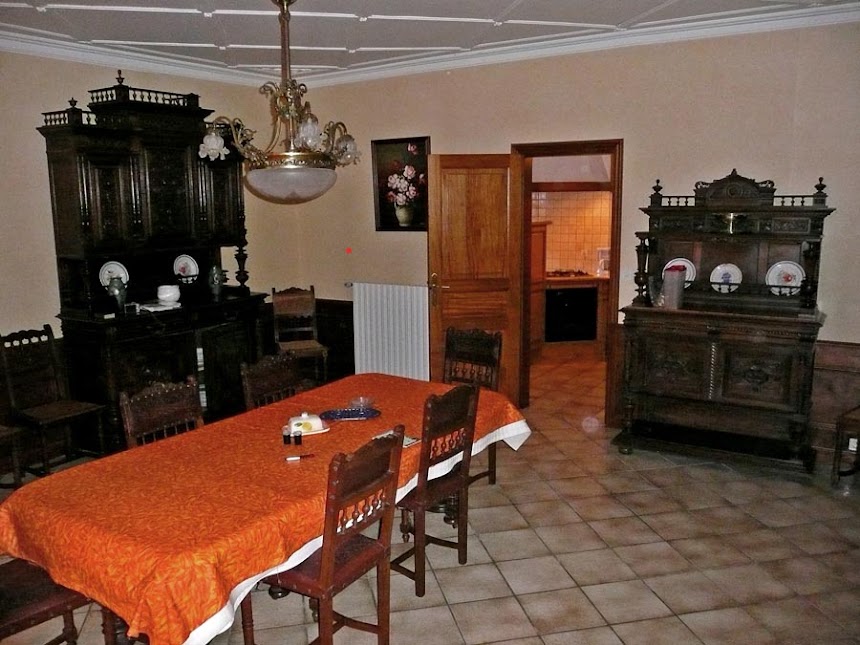 And the dining room — we spent more time in here
and in the kitchen than we did in the living room.
The house was huge, as you can see from the pictures in this post. I didn't take pictures of the bedrooms — not sure why — but I can tell you that all three of them were very spacious. In fact, the house was at least twice, maybe three times, the size of our house in Saint-Aignan. There were two full bathrooms. Mme Dauzet said she and her husband were in the process of renovating it, with the idea of living there themselves, when her husband fell ill and died a few years ago. 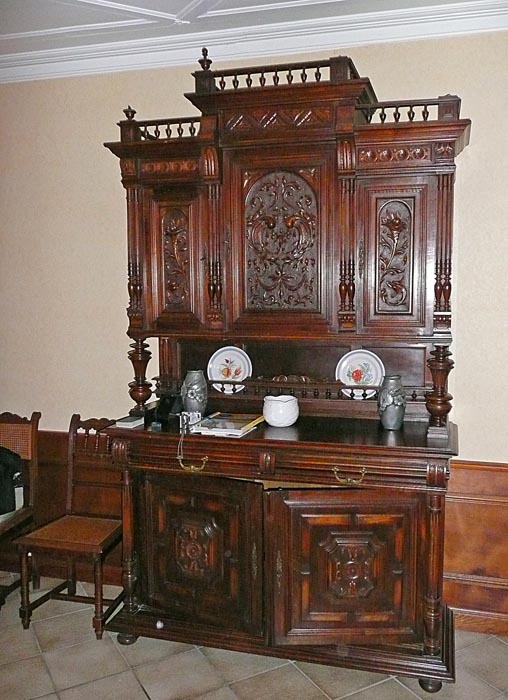 Dining room furniture — the place was well equipped
with dishes and kitchen things.
For a while, she let the place stand empty, but after a while she decided to finish off the restoration and renovation work and rent the house out to vacationers as a gîte rural. We paid the shoulder-season rate of 360 euros for the week, which was very reasonable (72 euros per person). Even though we stayed only 3 or 4 nights, and not all 7, we thought it was a bargain. The high-season rate is 500 euros/week ($700 or so). The place sleeps 6 or even 7 people, easily. 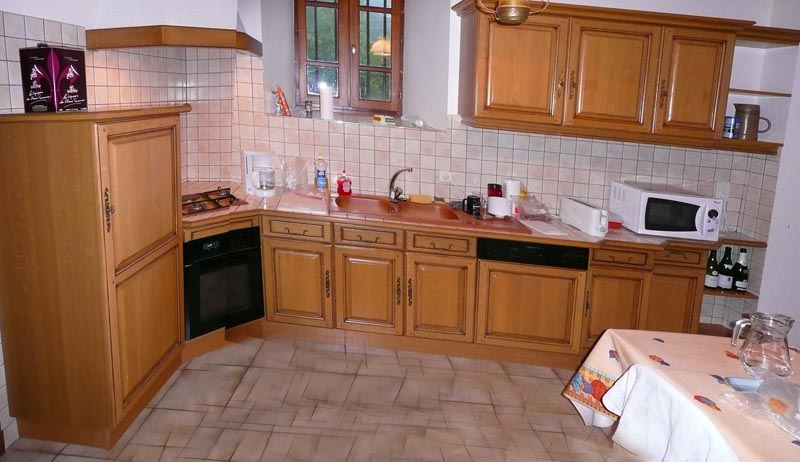 A patched together photo of the kitchen — pretty nice
It was about a 10-minute walk up into the village, where there was a church, a hotel, and one little grocery store. That was about it. Oh, and a château, of course. I'll be posting pictures of all these places over the next week or so, as well as pictures of Salers, our drives through the park, a couple of nearby châteaux, and our encounters with cows and cheese producers.
Posted by Ken Broadhurst at 06:43