At the end of our first full day at Saint-Chamant in the Cantal, we decided to take a walk through the village, past the church, to see if we could find the château. Now, châteaux are not usually hard to find, because they often dominate the landscape for miles around.

This one was different, however. From our side of the village, we could see the church, and in the distance we could see a couple of other big buildings. one of which might have been a château. It turned out that neither of them was. One was a big stone house, and the other was a building called Le Chapitre — the chapter house — where a religious community lived (or lives?). 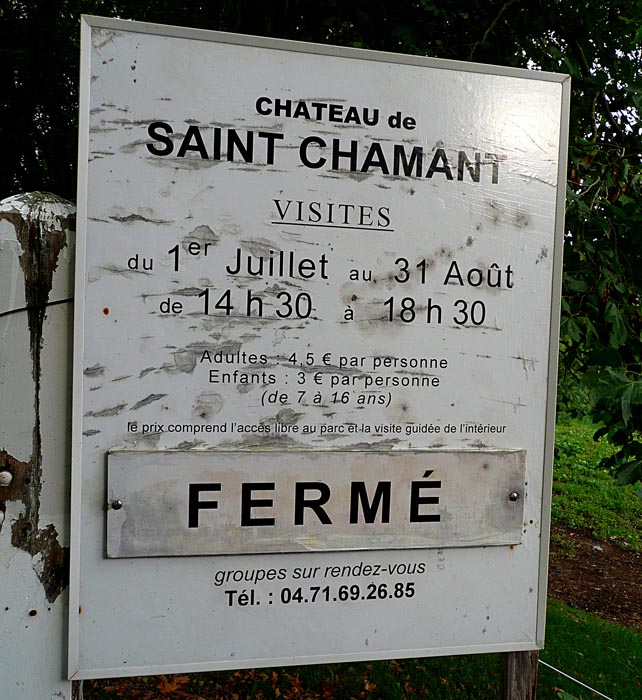 Open in July and August only, and here it was September 2
Saint-Chamant's château was farther down the road. When we got there, a big sign announced its existence, but you still couldn't really see it. A tree-lined lane was all that was visible. The sign said the château was closed for the season but, undeterred, we thought we might walk up the lane a way and try to catch a glimpse of the building itself. 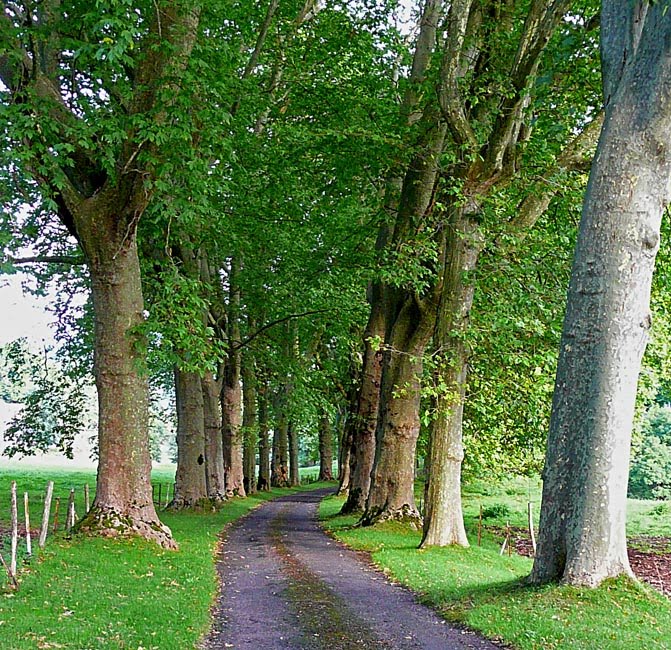 Let's just walk up this lane a little way 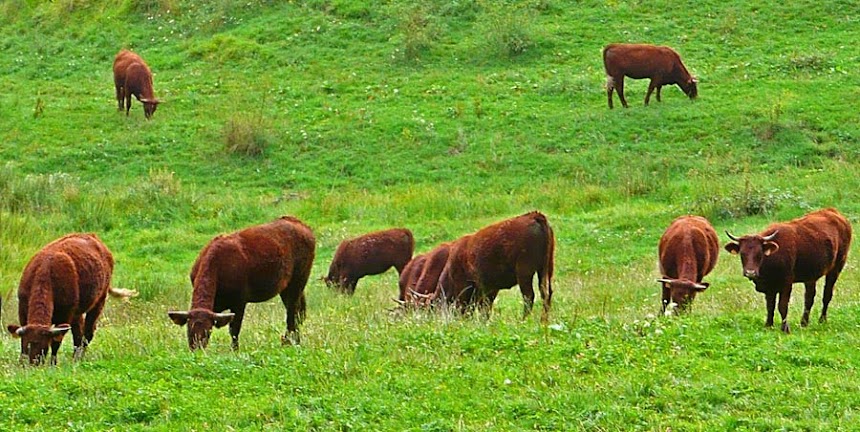 These cows grazing on the château grounds
didn't pay us much mind
It wasn't long before the château came into view. The big rectangular building, built of the local volcanic stone, looked more like a schoolhouse or government building than a typical fortified château. 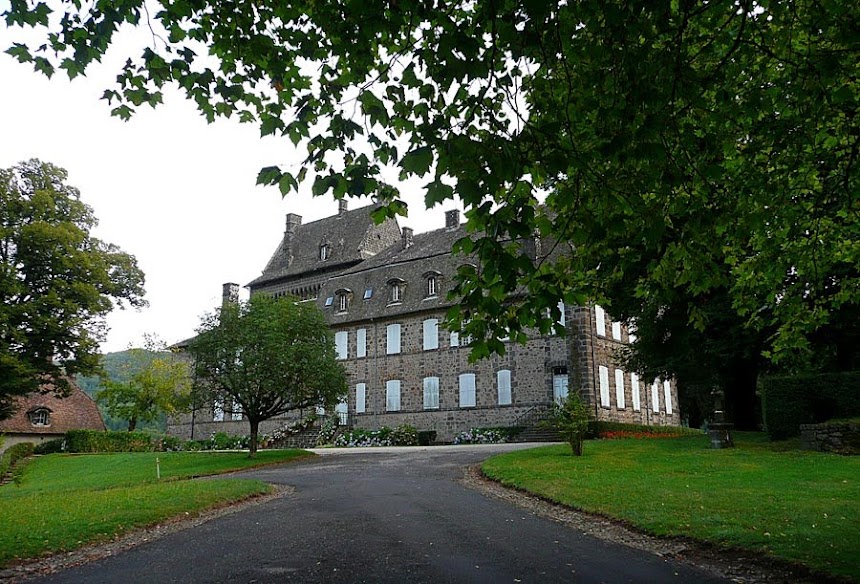 Here we are in front of the Château de Saint-Chamant,
which overlooks an emerald-green valley
(This is two pictures "stitched" together.)
Not satisfied with the view from the top of the lane, and seeing the building tightly closed up, we decided to take a stroll around it and take some pictures. Who would mind? Nobody came out to tell us we were trespassing. I admit I was nervous though. I wouldn't want people walking around in my yard, uninvited. 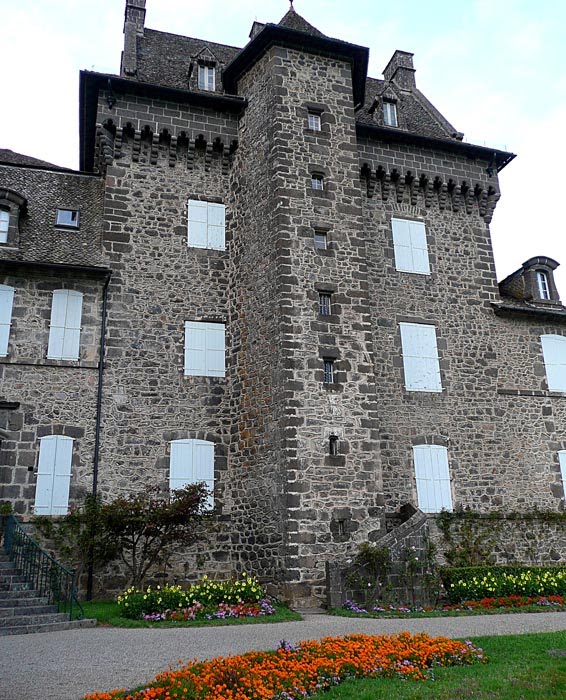 The front tower of the château
Walt wrote about the château in Saint-Chamant a few days ago (link), and the information is there if you want it. He didn't come with us on this particular walk, so he never got to see the château from up close. 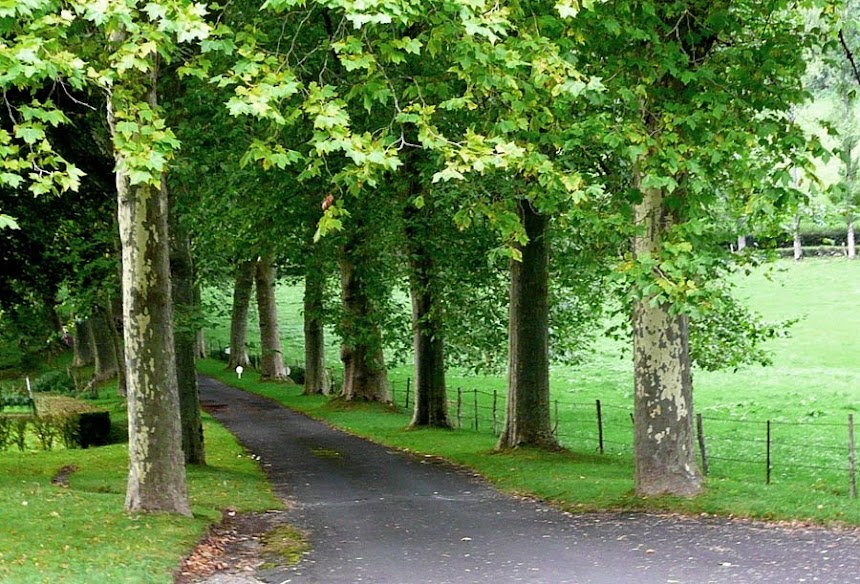 The exit, back down the same lane
As we walked back toward home along the tree-lined lane, a car drove it. The woman driving it gave us a slightly dirty look, as if we really were not supposed to have entered upon private property. But she didn't stop to chastise us, and I was thankful for that.
Posted by Ken Broadhurst at 09:40