A wild week, starting in Paris

It was. When you have become a complete homebody, a week during which you spend a couple of hot days in the center of Paris, eat dinner in two crowded Paris restaurants, ride subway trains, drive hundreds of miles, and discover a part of France that you had hardly ever seen before... well, that's wild.

I'm exhausted. But in a good way. The undiscovered part of France was the Auvergne, a mountainous area in the center of the country. We saw millions of cows, extinct volcanoes, waterfalls, and medieval villages and castles. It rained. We watched Cantal cheese being made on a farm, with milk from the afternoon milking. We ate a lot of Cantal cheese, and others. Oh, and I had a minor car accident. 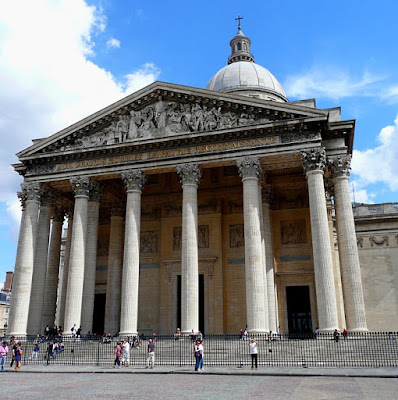 The Panthéon, in the heart of the Latin Quarter in Paris
The Paris part of the trip was just two days. I left Saint-Aignan at about 8:30 on Saturday morning, a week ago, and arrived at the Gare d'Austerlitz at 11:45. I had a couple of tickets, so I just hauled my little rolling suitcase down stairs and escalators into the metro and caught a train over to CHM's neighborhood. It's a straight shot — no correspondances (line changes).

Our fine home-grown tomatoes and plums, which I had packed in a little cardboard box that fit inside my suitcase, made the trip just fine. CHM peeled them by dunking them in boiling water for a few seconds, and then sliced them up into a bowl. We had tomatoes with balsamic vinegar and olive oil, slices of ham with bread and butter, and part of a 1988 bottle of Côtes du Ventoux red wine for lunch. The weather was hot and sunny. 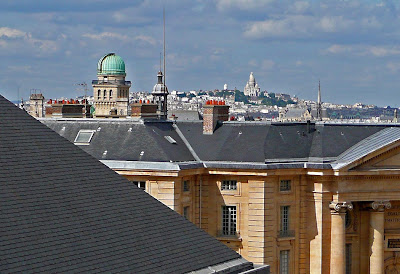 This was the amazing view from a friend's 7th-floor room
at the Hôtel du Panthéon in Paris. It had a great balcony.
That's Montmartre and Sacré Cœur in the distance.
Then I headed over to the Hôtel du Panthéon, in the Latin Quarter, to meet my friends who were staying there. We had three or four hours "to kill" before dinner at the Café Louis-Philippe, and we decided just to walk for a while. It was walking weather, though hot. 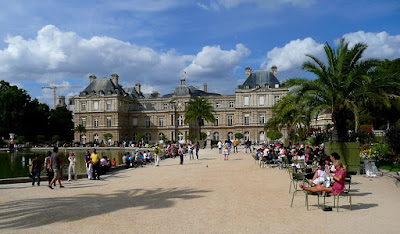 Saturday afternoon in the Jardin du Luxembourg
Our first leg was a stroll around the Jardin du Luxembourg. But before that we stopped in at the police station in the Mairie du Vème Arrondissement, right across the street from the hotel and the Panthéon. I had told Evelyn and our friends about the night I spent in a cell there in 1970 — it's a long story. They wanted to see the jail. 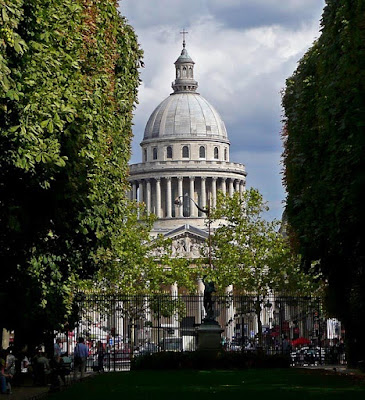 The Panthéon seen from the Luxemburg Gardens
We walked in and a woman in police uniform came out to greet us. I tried to explain why we were there. I said I had spent a night there 40 years ago. She said, no, that wasn't possible. I must be mistaken. Then I told her I spent that night in a cell. She laughed and said yes, this must be the place. We all laughed. She must have thought we were crazy.

After the Luxemburg Gardens, we walked over to the Place Dauphine on the Ile de la Cité. We were thirsty after an hour or so of walking in the hot, dusty parks and streets, so we sat down at a café. Evelyn ordered a Pastis, because she had never had one before (I think). Pastis is an anis-flavored drink that you mix with water. It's popular in Provence, when the weather is hot. It replaced absinthe when that drink was outlawed 100 years ago. I think Evelyn enjoyed it. I had a glass of Chablis (a Chardonnay wine from Burgundy). 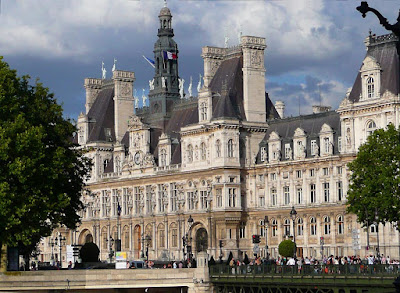 The Paris Hôtel de Ville — city hall —seen from the Ile de la Cité
We walked all the way around the Ile de la Cité, through the flower and bird market, through narrow streets, around Notre Dame cathedral. The river was pretty and there were many people out doing what we were doing. Then we realized we needed to go back to the hotel to freshen up and pick up a few things before we went to dinner. It was getting late...
Posted by Ken Broadhurst at 08:11