Following a truck, encountering a herd

We dropped Walt off at the gîte, I said, on our way to the Conches dairy farm at the place called Roziers near Saint-Chamant. Actually, we didn't drop him off. As we turned off the highway onto the lane that leads into the village center, we found ourselves behind a very big, and very slow-moving, truck that was hauling, I believe, some kind of backhoe or harvester on a flatbed trailer.

Since we were going nowhere fast, I pulled over to the side of the road and Lewis stopped his car behind me. I got out and Walt got into the driver's seat in the Peugeot. I went and explained to Lewis, Evelyn, and Linda what we were doing: I would ride with them straight to the dairy farm and Walt would go back to the house with Callie, who was stressed out after a day in the car on curvy roads. 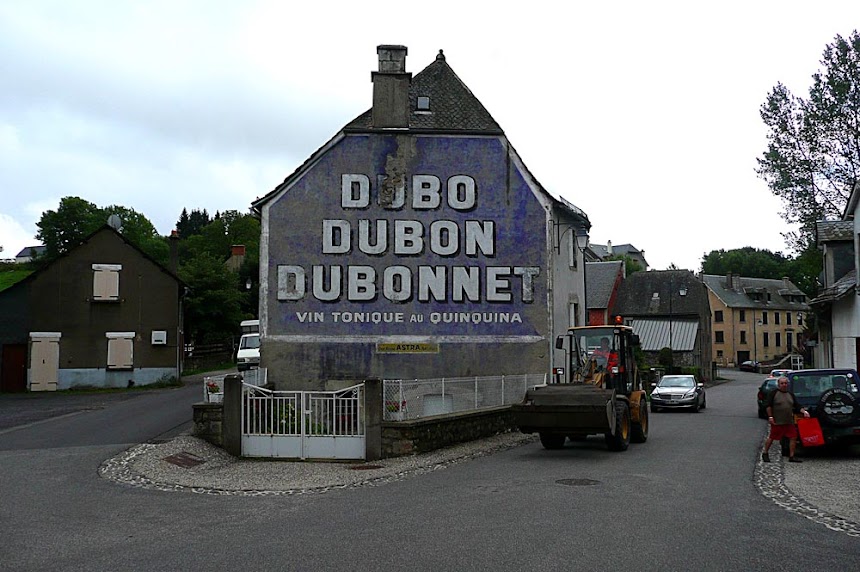 On the road from Riom to Saint-Chamant, trying
to get there in time for the 6:00 p.m. cheese-making

By the time we got everything settled, the big truck had moved on. I hoped we had seen the last of it. We drove into town, past the houses, hotel, and grocery store, up to the church. We turned left out of the village, feeling confident now that we knew the way. We had gone there early that same morning to see about the milking and cheese-making tour, but had been foiled. 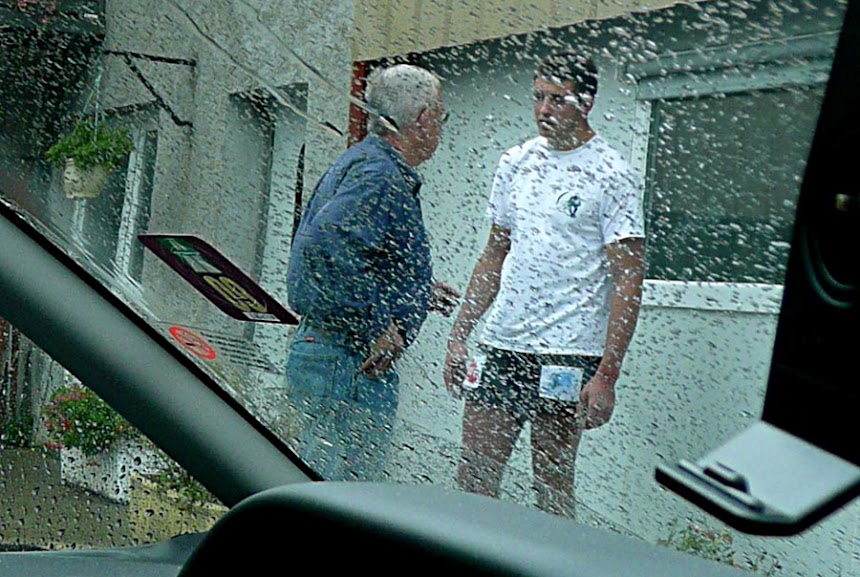 Here I am, through a rain-spotted windshield, asking
the dairy farmer's son about being able to observe the
cheese-making process later in the day. Evelyn's photo.


The road out of the village and out to the place called Roziers or Rosier (it's not on all maps) is again very narrow and slightly winding. And it passes through a deep and dark wood. As we penetrated into the woods, there was the truck, ahead of us. It was going the same way we were. And it was still slow-moving. It was impossible to pass on the narrow, curvy road.

There was one more left turn before we got to the dairy farm, so I figured that would be our chance to get out from behind the truck and make some good time. Well, no luck. The truck turned left right in front of us, onto a road that was, if anything, even narrower than the one we were leaving behind. Zut ! But then, the truck suddenly pulled over onto the left shoulder of the road and stopped. We thought he wanted us to go around him, and wanted to thank him for letting us by. 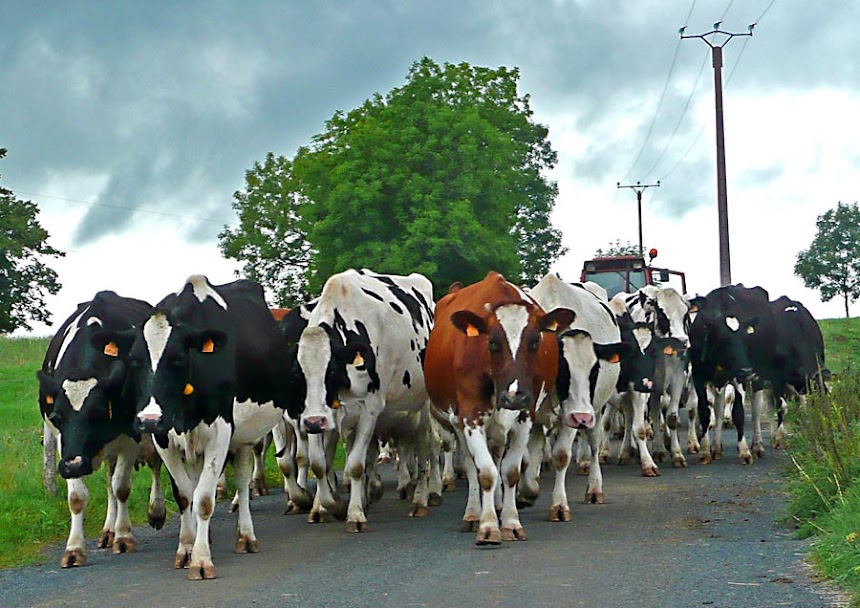 The herd, coming our way

Even I couldn't see around the right side of the truck, and I was in the passenger seat. Even so, Lewis, the driver, slowly pulled around it, carefully avoiding running into the ditch. We didn't get far before we realized there was a herd of cattle coming down the road ahead of us, and toward us. That's why the truck had pulled over and stopped. All we could do was get the car as far to the side as possible and wait for the cows to pass. This was taking forever. 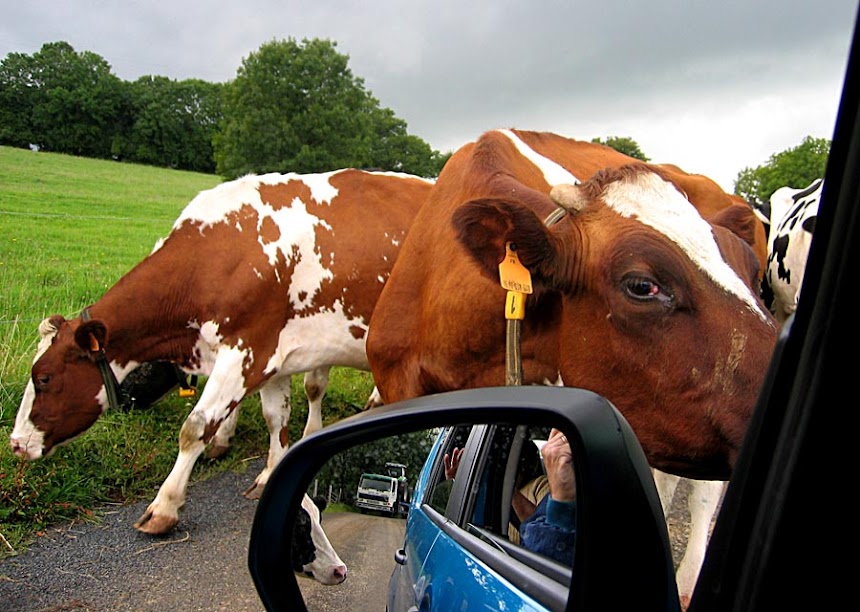 Getting up close with the cows. You can see the slow truck
in the rear-view mirror. Thanks to Evelyn for the photo.

You'll notice that these were not Salers cattle, but some other breed. Well, we finally arrived at the cheese-making facility, a modern building with a big gravel parking lot and a lazy dog in front of it. There was a picture window in the cheese-making room and we could look right in. The man stirring the vat of curdling milk gestured for us to come on in, pointing to the door on the left. 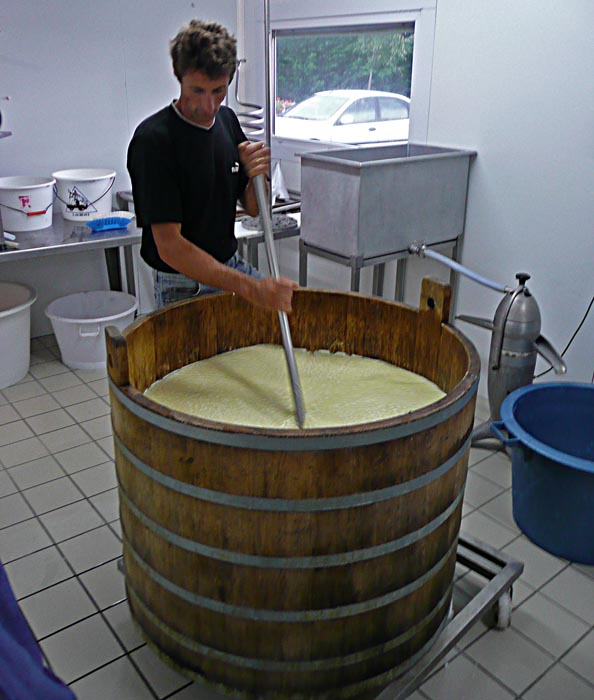 Stirring the curds and whey

The four of us trooped in. There were two other people there watching the process. They were a young couple from Poitiers, probably on their honeymoon. The cheese-maker was stirring and cutting the curds — le caillé — that had been separated from the whey — le petit lait — by the addition of rennet — la présure. Rennet is extracted from the first stomach of a calf. It plays an important role in bovine digestion, and in cheese-making. 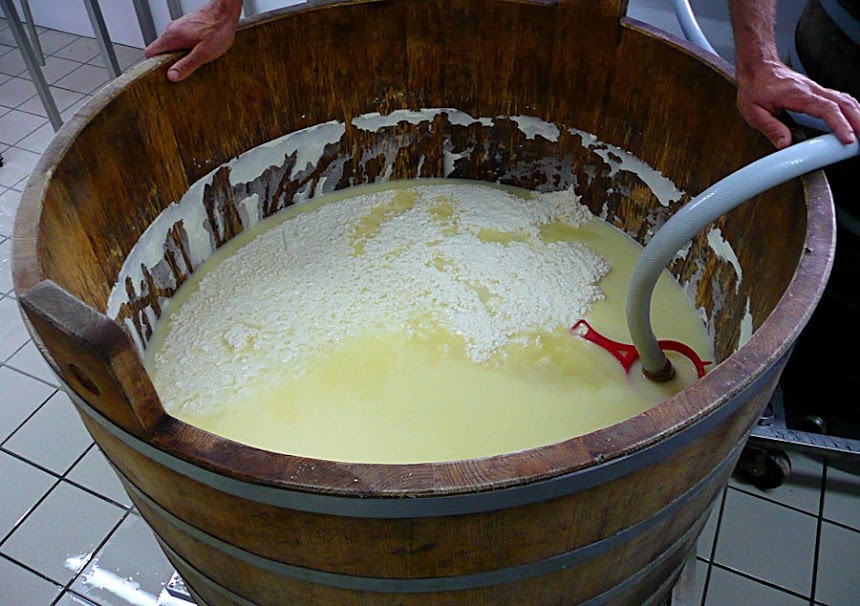 The whey is pumped out of the barrel, leaving the curds.

Our shoes were very dirty after our trip out into the pasture to watch the milking a couple of hours earlier. The floor of the cheese-making facility was white tile, and it was wet. It had just been washed down. We were making ugly black footprints everywhere we stepped. As the whey was being pumped out of the barrel, the cheesemaker invited us to come outside with him. He turned on a garden hose and told us to wash off the soles of our shoes in the stream of water. We did, and got most of the crud off our shoes. 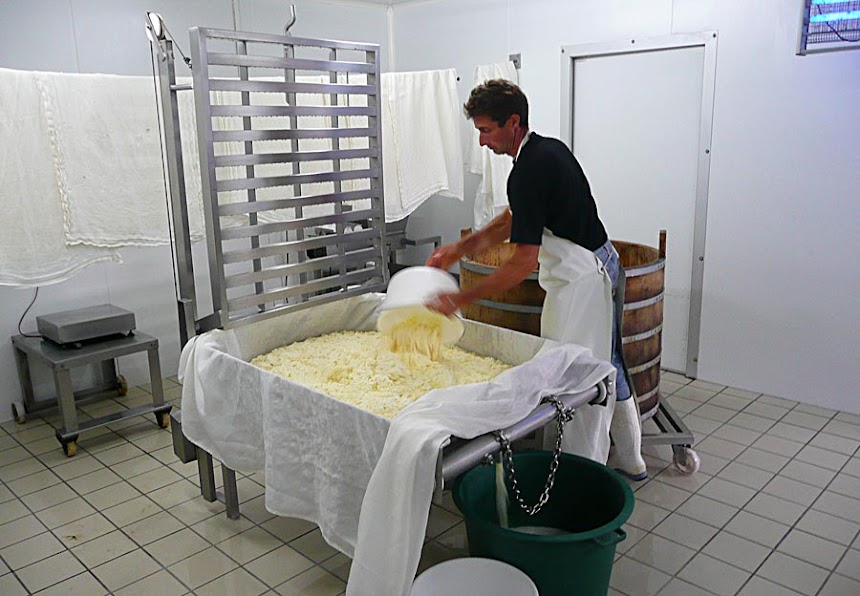 Pouring the curds by the bucketful onto the press

Then a woman appeared and brought the four of us each a pair of blue plastic booties to put on. I thought about how we were allowed into the cheese facility without having to put on white jackets or hairnets. In the U.S., it probably would have been different. The cheese-maker was constantly washing down the floor with a hose, and there was a drain in the middle of the room to take the wash water away.

We put our booties on over our shoes as the cheese-maker started removing the milk curds from the wooden barrel and putting them into a big apparatus, on a bedsheet-sized piece of cheesecloth, where they would be pressed, cut, and pressed again several times to extract the rest of the liquid they contained. It's all done by hand.