We had walked for three or even four hours. Paris was hot and dusty. Le Jardin du Luxembourg, Odéon, Le Pont Neuf, Place Dauphine, Notre Dame. Everybody was tired. We are all what the French call « seniors », after all. That part is hard to believe. The dictionary defines « les seniors » as "the over-fifties."

It was getting to be 7:15 p.m. or so and there we were standing on the sidewalk behind Notre Dame, looking at the permanent crowd gathered on the little footbridge that leads over to the Ile St-Louis. We realized that we needed to walk back up to the hotel on the Place du Panthéon before we went for dinner at the Café Louis-Philippe (which is right there across the river from where we were standing). Our reservation was for 8:00. 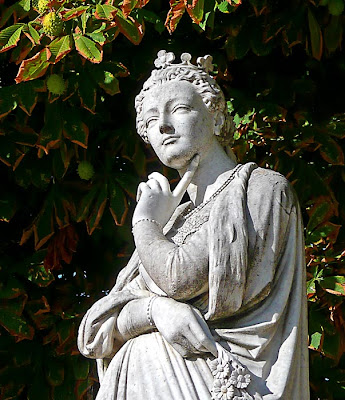 A statue in the Luxembourg Gardens, with its nameplate
So we walked up the hill — they call it the « Montagne » Ste-Geneviève, and it felt like a mountain at that point — back to the Panthéon. That trudge did some of us in. There is no practical way to take the metro or a bus from the Place du Panthéon down to the banks of the Seine at the Pont Louis-Philippe. We even asked the man at the hotel's front desk for advice. Walking was no longer an option.

We could take a bus over toward the Place de la Bastille, but then we'd have to get off that bus and get onto another one. The connection might take a while, especially on a Saturday evening, when bus service on some lines is reduced. Or we could take the metro from Luxembourg, a short walk from the hotel, over to Châtelet-Les-Halles. From there we could walk to the restaurant or change to the line that would take us to the Pont-Marie metro stop, the one closest to the Café Louis-Philippe. 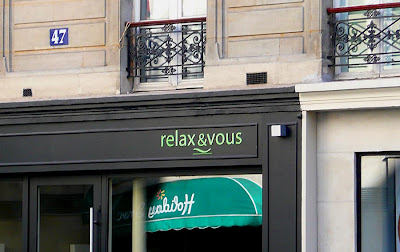 Relaxing is not always an easy thing to do in Paris —
« relax&vous » is a pun on the expression « relaxez-vous »
We did that. It was an experience. Once we found the entrance to the RER/metro at Luxembourg — it's on the other side of the Boulevard St-Michel from where it used to be years ago, when I was a frequent metro rider — it only took five minutes to get to Châtelet, which is the central metro and RER hub for the whole city.

The Châtelet station was mobbed. I knew better than to pass through there, but after that forced march up the "mountain" an hour earlier, nobody was willing to go any farther on foot. Hoofing it would have been the most practical solution, and it is in fact all downhill from the Panthéon. But never mind.

At Châtelet, there were still two options: (a) go back up to street level and walk to the Café Louis-Philippe, or (b) make a connection to the metro line that goes to the Pont-Marie metro stop. Again, the consensus was that walking was not especially attractive. So we made the connection, with all that involved. 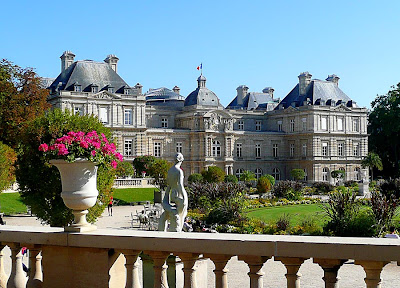 The Palais du Luxembourg, where the French Senate meets
I don't know if you've ever changed metro lines at Châtelet, but if you haven't, be prepared. The station is nearly always a zoo. That Saturday evening, with the beautiful weather, the whole population of Paris was out and about. And it was August 30, so there were many thousands of tourists everywhere, all lost and wandering around looking at the profusion of signs pointing to different metro lines going to different parts of the city and suburbs.

We joined the throng, located the signs pointing to our line (no. 7, direction Mairie d'Ivry/Villejuif), and headed off. The five of us managed to stay together, despite the pushing and shoving of the crowds, with people dashing in every direction to get ahead of somebody else. And we ended up walking farther underground, through endless tunnels and on a series of moving sidewalks, than we would have walked if we had gone up to the street and strolled on over to the restaurant. 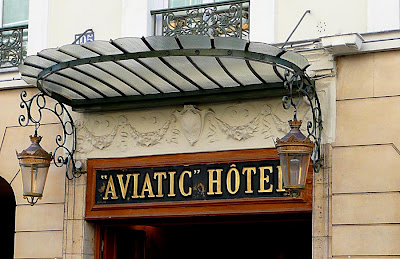 Why the funny quotation marks?
Any idea what the word « Aviatic » means?
It was certainly a great cultural experience. Only two of us, Evelyn and I, have any real experience of the metro. We both worked in Paris many years ago and cherish memories of crowded stations, packed subway cars, and the general feeling of chaos and claustrophobia that the Paris metro inspires at rush hour or when their are strikes and slowdowns on the system. Our three companions had probably never imagined such a scene — not even Marie from Normandy, who was with us and who is French.

By the way, we were supposed to be meeting our Normandy friend Marie's son and cousins at the Café Louis-Philippe for a pre-dinner drink and social hour, and we were late. The son had called his mother on her mobile phone while we were still at the Hôtel du Panthéon to say he and his cousins were at the restaurant and waiting for us to arrive. Where were we? Well, we were late. In Paris, it seems, one is always late for something.

Besides, the son said, he had asked at the restaurant about our reservation for six for dinner, giving the name Marie had told him the reservation was made in. The restaurant staff said they did not have any such reservation on the books. Marie told her son to ask if there was a reservation in my name, Broadhurst, since I was the one who had called it in. Good luck! First of all, my name looks perfectly barbaric to anybody who speaks French but not much English. All those consonants! And that OA vowel combination — it doesn't exist in French. It's impossible to remember or pronounce. 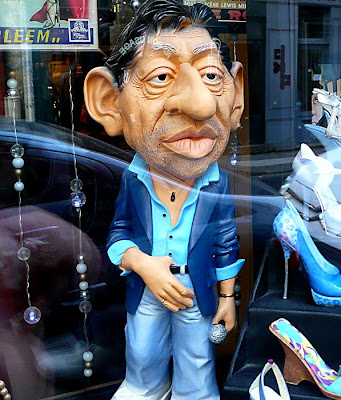 The late Serge Gainsbourg, an icon of French pop music,
in a shop window in the Marais neighborhood
So as we rode the metro and pushed and shoved out way through the madding crowds at the Châtelet station, I kept asking myself what had happened to the reservation I had requested. I had telephoned the Café Louis-Philippe twice over the previous few days, from Saint-Aignan, and I was convinced my reservation had been duly noted and recorded. It was just one more thing to worry about, along with getting lost in the Châtelet confusion and being seriously late, as we made our way across the city center. What would we do if the restaurant was full and we didn't have a reservation?

We did finally arrive at the restaurant at about 8:30 p.m. And there had been a misunderstanding, but not between me and the restaurant staff. Our reservation was on the books. I never figured out why Marie's relatives got the wrong information. The restaurant staff had been kind enough to seat Marie's son and cousins — all in their 20s — outside at a table on the sidewalk, where they had started having their drinks without us. We joined them and the restaurant host said we could take our time and our table would be ready when we were.

We weren't "ready" until about 10:15. We had a nice conversation — or several of them — with the cousins and son, mixing French and English as best we could to understand one another. Marie's son stayed with us for dinner, which was obviously a late affair. Most of us were starving by then. More about that tomorrow...
Posted by Ken Broadhurst at 08:13