Wishful thinking. I admit it. But summer will end suddenly in 2009. The sun will go behind the clouds, which will open up and drop many hectoliters of cold rain on us. At least, that's the way it will feel, in contrast.

Temperatures are running 10ºF/5ºC higher than normal for late September. The sky is luminously, abnormally blue. The grape harvest couldn't take place under better conditions. Neither could the hedge trimming and general yard clean-up. 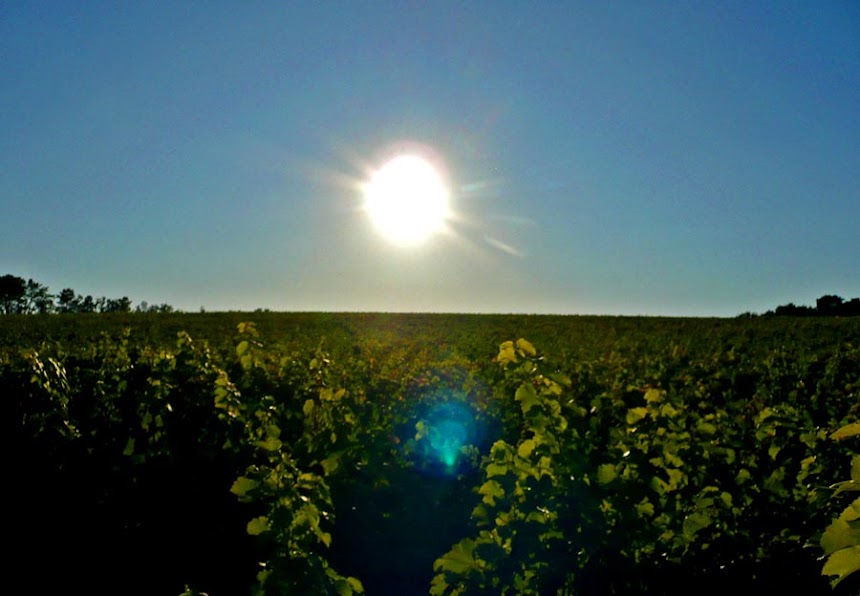 Sunrise over the vineyards in late September 2009
It's dry — the last time the grass had to be mowed was July 15. That was more than two months ago, and it has hardly grown at all. The tomatoes and eggplants are still producing. The mornings are a little chilly now, however, and you can tell that that tomatoes plants are finishing up. Just when you think they have given their all, though, they keep on giving. 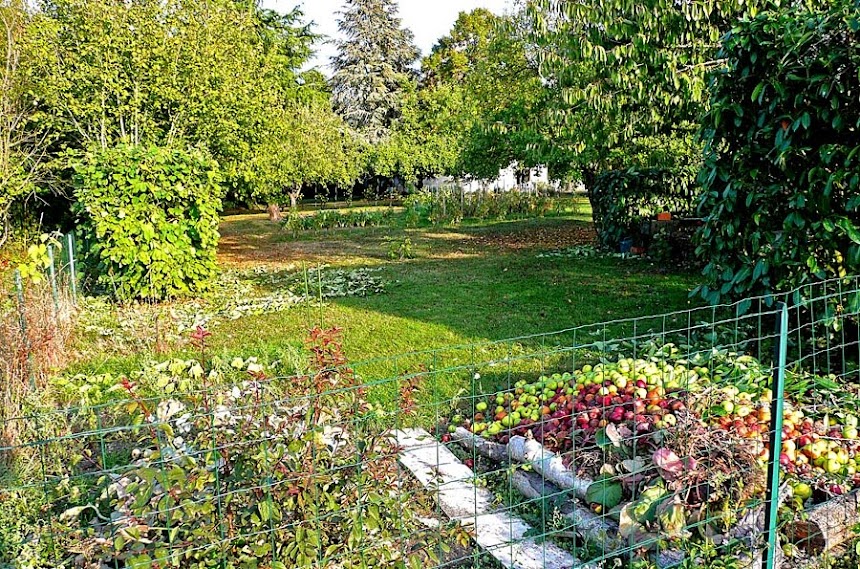 The garden from out back, and a compost pile full of apples
The Swiss chard is still giving too. I cleaned up the plants last week, pulling all the brown and yellowed leaves off the bottom of each plant. They bore up under the real heat of August, but I can tell that they are happier with September's cool, dewy mornings and sunny, but not quite so hot, afternoons. I pulled out half a dozen plants last Saturday and we ate them, leaves and ribs, in a sauce béchamel enriched with grainy, old-fashioned mustard (called moutarde de Meaux or moutarde à l'ancienne). They're good that way. 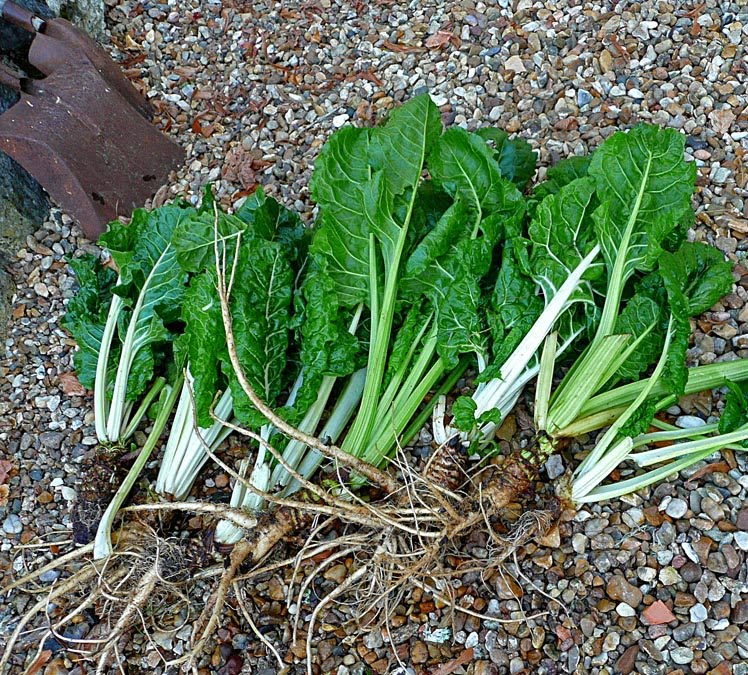 Chard from the garden, pulled up roots and all
The collard greens will probably experience a burst of growth as the temperatures continue to moderate. They are a late fall crop. I'm surprised they didn't bolt during the long hot spells of July, August, and earlier September. I'm hoping for some bigger, fleshier leaves. I've been watering them. Now I think I'll fertilize them. 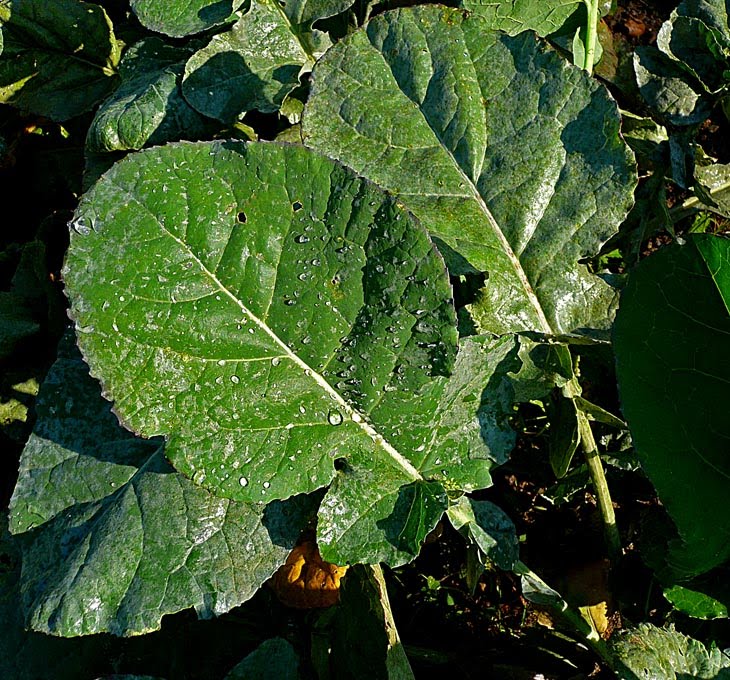 Collard greens, getting ready to really grow, I hope
The corn, lima beans, and pole beans are gone. So are the tomatillo plants, cherries, pears, and plums. Apples, however, keep raining down, and we pick up wheelbarrow load after wheelbarrow load of them to compost over the winter. I told Walt that maybe we should cut down the biggest apple tree, the one that produces so many tons of fruit every second summer, but he doesn't think so. It's true that it's an attractive shade tree. Of course there are two others next to it that are just as nice. Don't stand under them right now — you'll get conked on the head. 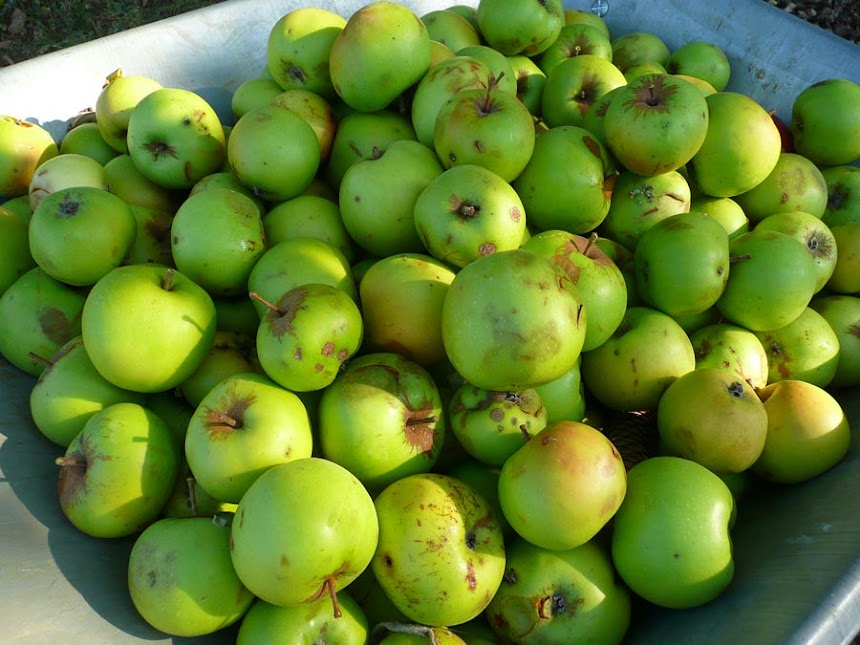 A wheelbarrow load of apples — the umpteenth — from the big tree
The hedge trimming and clean-up work continue apace. We don't work on it that many hours a day, but we do put in our time. There's lunch to cook, however, and to recover from in the afternoon. And there's a certain dog that wants a walk every morning and every evening. It's nice to have the luxuries of time, good food, and nice weather. 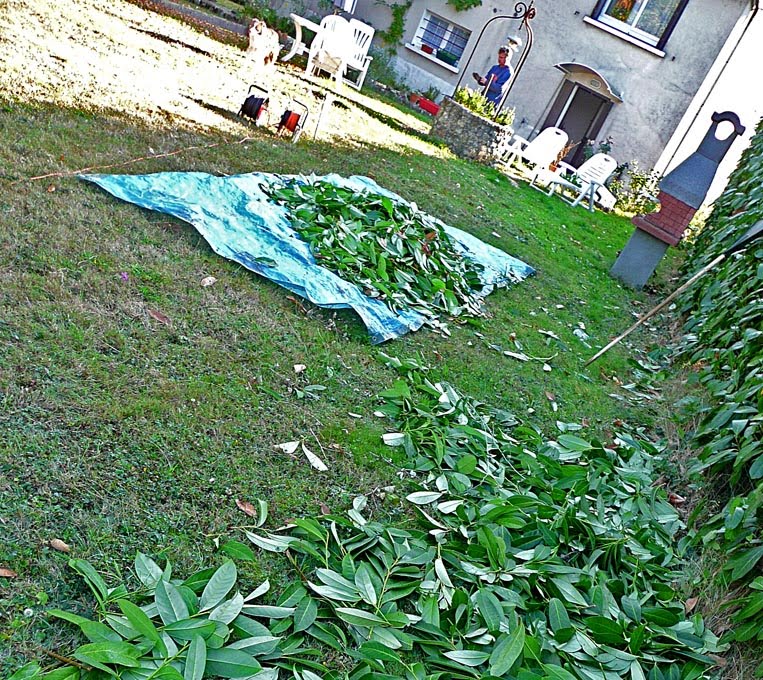 Hedge trimmings and the clean-up — I finally realized that
piling the leaves on a tarp, bundling them up in it, and
dragging them to the burn pile was the best way to do it.
On our walk yesterday, Callie and I ran into Chantal Guerrier out on the paved road. She and husband Jean-Noël are busy bringing in the grapes. But like all the other local vignerons, they aren't in a very big hurry, because the weather is cooperating. The grapes are sunbathing, and ripening. 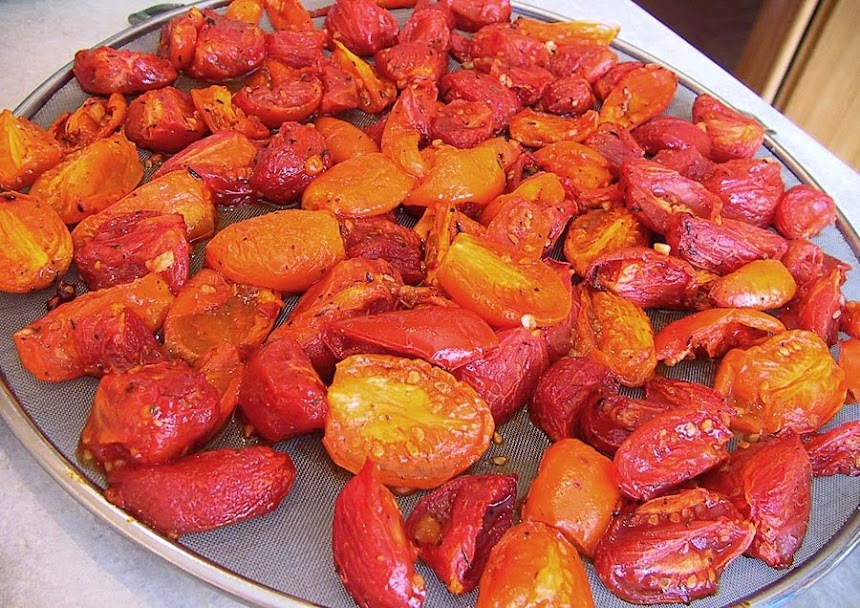 Tomates confites are roasted for 2½ hours in a slow oven
with olive oil, garlic, salt, pepper, and a pinch of sugar.
This is a mix of yellow and red tomato wedges.
Sunday afternoon, Carolyn (who leaves comments here) and her husband came by for a light lunch. They were spending about a week in the area, as they often do this time of year. We had roasted red peppers and slow-roasted tomatoes (tomates confites) from the garden, with local goat cheese and local wines. 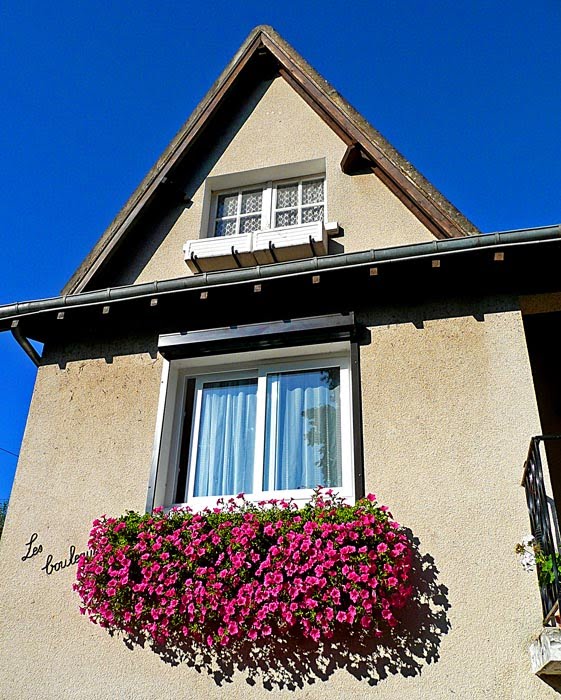 Surfinia flowers in a planter under the kitchen window
have been spectacular all summer.
They brought a bottle of Muscadet and some local rillettes de porc, and we had a little pot of pâté de lapin (rabbit) that I bought at the market in Noyers. Walt made an apple tart with a calvados-flavored custard base and apples from out back. It was a nice afternoon around a table out in the back yard.
Posted by Ken Broadhurst at 07:50