Getting away from it all

A priori, Saint-Chamant would be a nice place to live. If you can get a DSL connection there, that is. And I bet you can't. It would be hard for me to live without a high-speed Internet connection, now that I'm used to having one.

Another disadvantage of living the life in Saint-Chamant would be the distances you have to drive to go to a market or supermarket. There's a little Vival superette in St-Martin-Valmeroux, about 10 minutes by car from Saint-Chamant. And there's an outdoor market there on Fridays. I went, but there wasn't much to it. There's also a butcher's, and two bakeries. 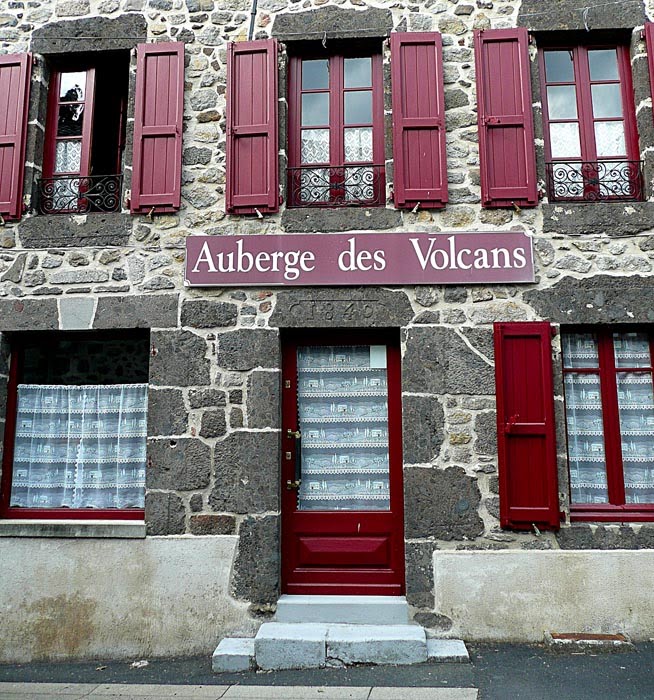 The hotel in Saint-Chamant, a village inside the boundaries
of the Parc Naturel Régional des Volcans d'Auvergne
The real supermarkets — Carrefour Market, Intermarché — are in Mauriac, and it takes 30 minutes or so — in good weather — to drive up there. There's a pretty big outdoor market in Salers, at least on Wednesdays, but that's a 20-minute drive on good days too. And it can be crowded with tourists. There's a nice-looking SuperU up in the town called Ydes, but that's well north of Mauriac and a good 45-minute drive. 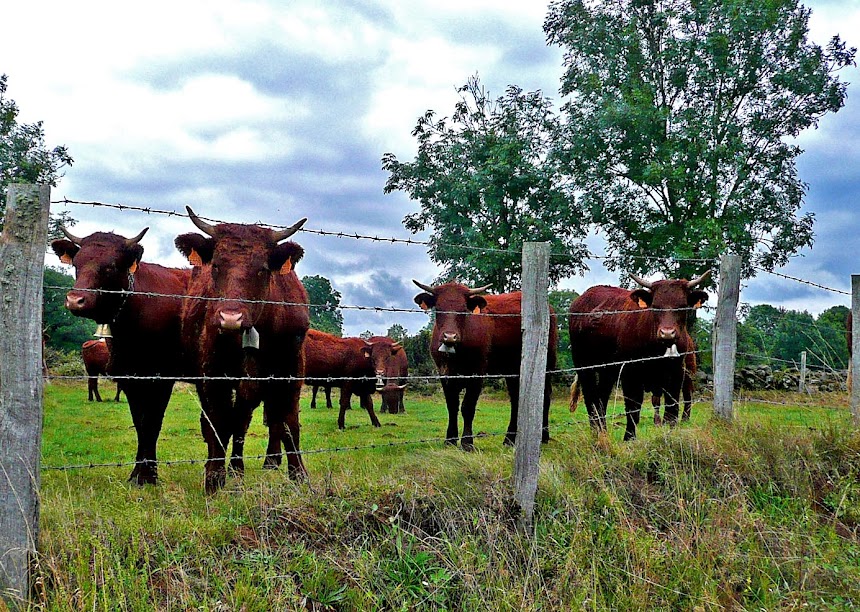 There are probably more cows than people in the Cantal.
These are the local breed called Salers, and they're everywhere.
It would be great to live in that huge house in Saint-Chamant, the one we rented as a gîte rural. But you know what? You'd have to heat it in the wintertime, which has got to be long and cold down there in the mountains. Did I mention that the elevation of Saint-Chamant is 3,000 feet? It must snow quite a bit. 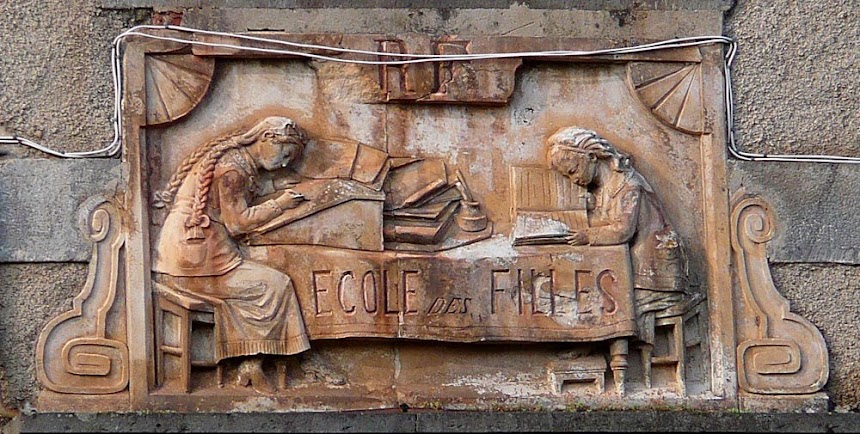 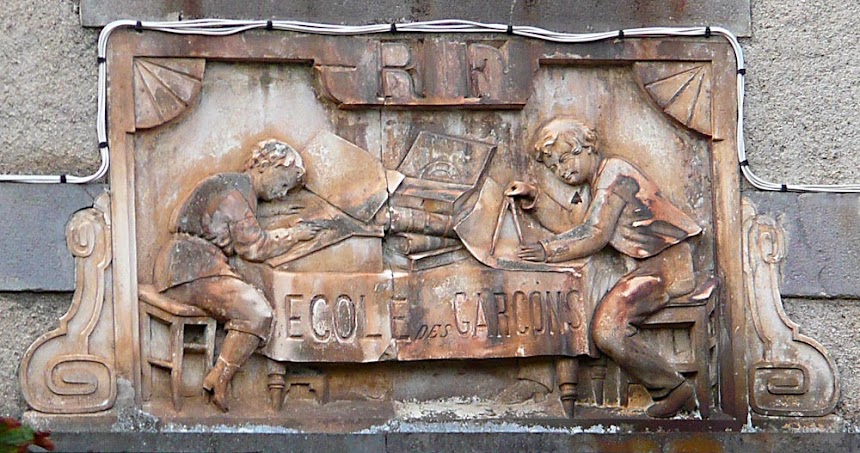 There's an old school in Saint-Chamant.
It's probably mixte, as we say, these days, though —
not separate classes for girls and for boys.
It certainly is beautiful, though. Wikipedia says the population of the village was 528 in 1962, but it has declined steadily ever since and is now 280. Nearby Salers looks much bigger — more like a town than a village — but its population is only 368 souls. It's really more a tourist attraction than an actual town. Halfway between Saint-Chamant and Salers is Saint-Martin-Valmeroux, where 911 people live. 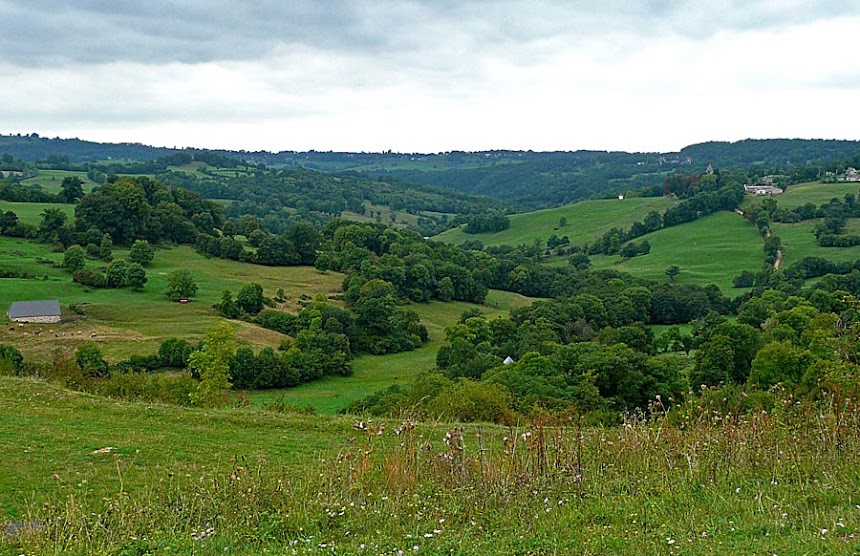 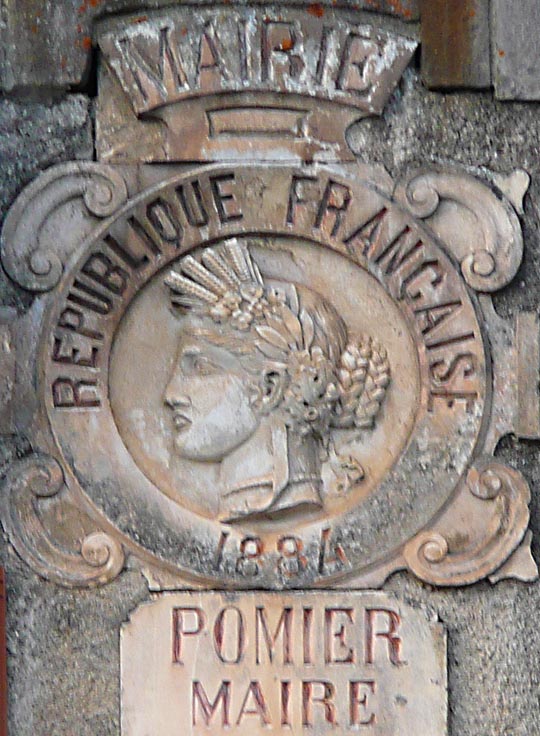 Another plaque on the school at Saint-Chamant
shows that it used to be the village hall too.
So I thought we lived out in the country — and we do — but Saint-Chamant is nothing if it is not remote. And beautiful. It's a great place to visit if you want to get away from it all.
Posted by Ken Broadhurst at 08:00