It was early September in the Cantal (Auvergne) and the weather was foggy, misty, and intermittently rainy. We wanted to see the volcanoes, les puys, but fog made that difficult. The day before, we had decided not to drive into the Parc Naturel des Volcans because of poor visibility at high altitudes.

On Thursday morning, we decided it was then or never. First we headed toward the village — One of the Most Beautiful Villages in France, officially — called Tournemire, south of Saint-Chamant, where we were staying in a gîte. Tournemire is the site of the Château d'Anjony, a mass of medieval towers on a steep promontory overlooking a green valley. More about that later. 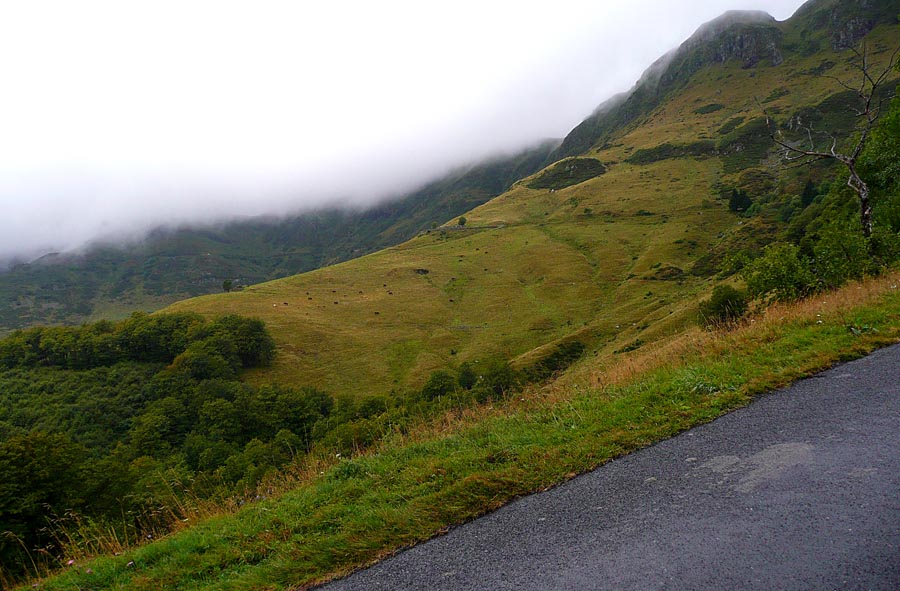 Not sure you can tell how steep this roadside drop-off is...
After lunch in Tournemire, we headed out on narrow, winding roads toward the volcanoes. There were no guard rails in most places, despite the deep valleys, and there were no other cars on the road. What there was, though, was plenty of cows. We stopped and took pictures of some at one point, when the rain let up. 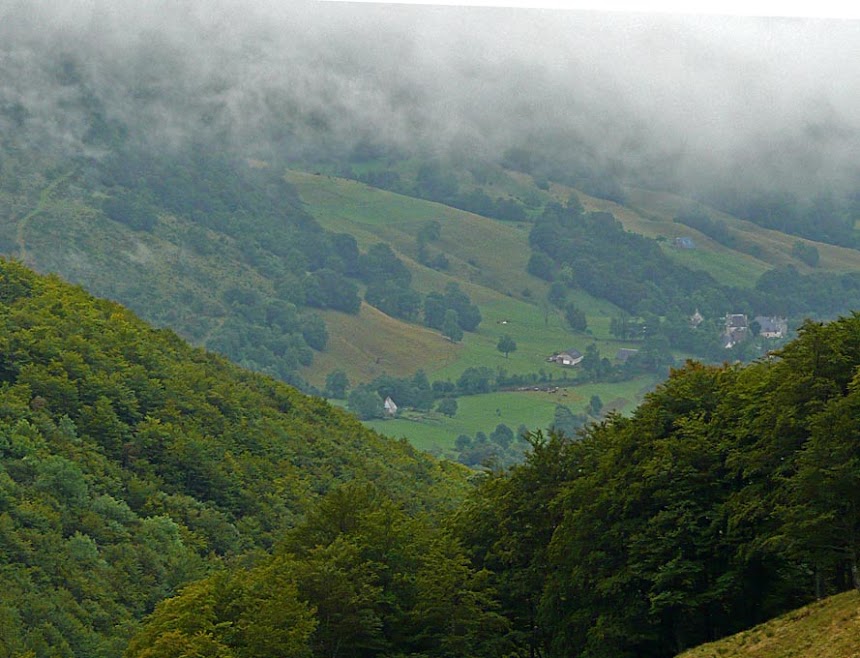 A typical valley in the Parc des Volcans, with fog
Click on the pictures to see them full-size
It had only been a 15-minute drive from Saint-Chamant to Tournemire. We had stopped at a farm near Saint-Chamant called the GAEC de Conches, only to be told we were too late for the morning milking and too early for the cheese-making process. Come back at 6:00 p.m., the man said. A GAEC is a Groupement Agricole d'Exploitation en Commun, a kind of small corporation involving several farmers. 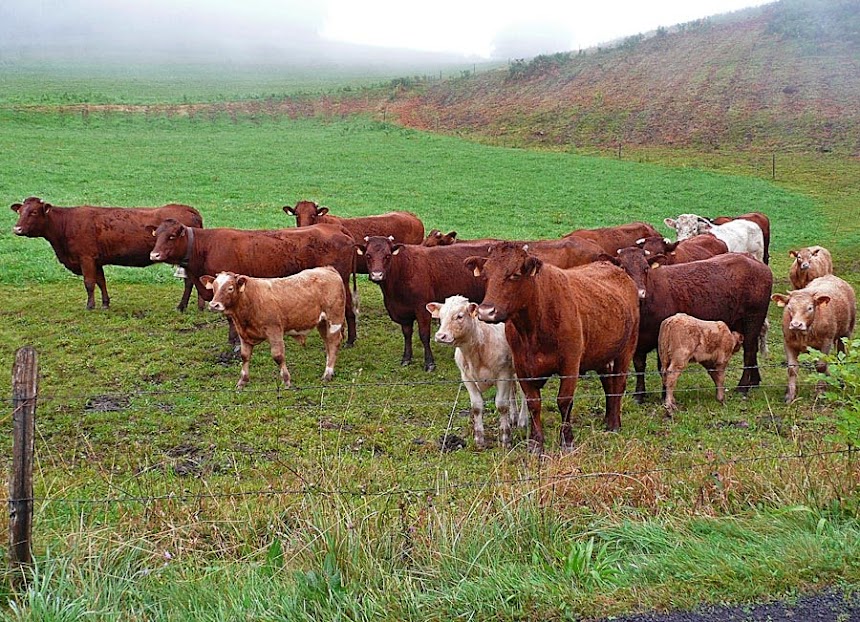 We pulled over and took pictures of these cows and
calves at a point when the rain had stopped.
Now we had decided to drive more than 50 km, which would take about an hour, through the fog along the winding roads with steep drop-offs, and up to the top of the mountain called Le Puy Mary, one of the highest in the area at 1800 meters (5900 feet). Of course, when we got to the top of the Puy Mary, we couldn't see anything at all because a stiff wind carrying fog and mist was blowing. It was cold up there. And it was impressive, despite — or because of — the weather conditions. 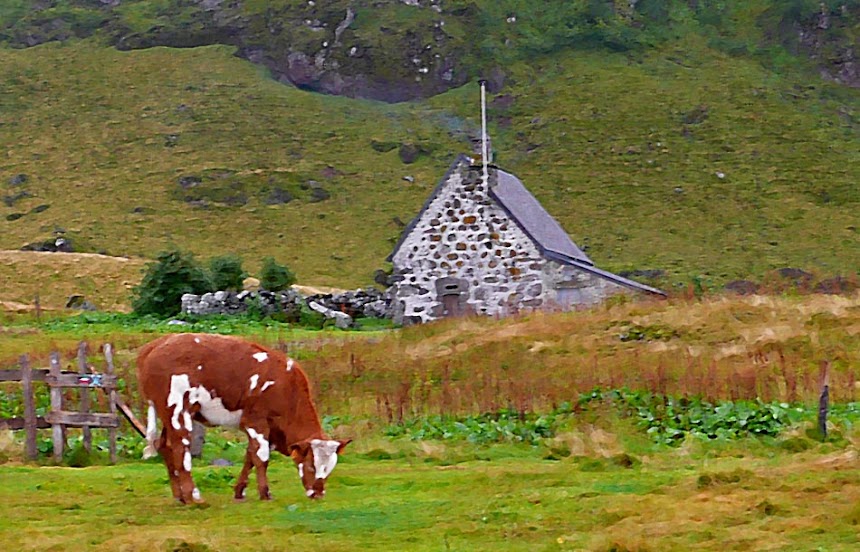 Mountain scene we saw as we drove down
the north slope of Le Puy Mary.
On the other side of the mountain was a green valley centered on the village of Cheylade, and there were at least two dairy farms producing Cantal cheese in that valley: Chamalières at Le Claux, and La Famille Rodde at Le Caire. We thought we would try those for a view of the milking and/or cheese-making, and if they didn't pan out we would try to get back to the Conches farm near Saint-Chamade before 6:00 p.m. to see the cheese-making process there. 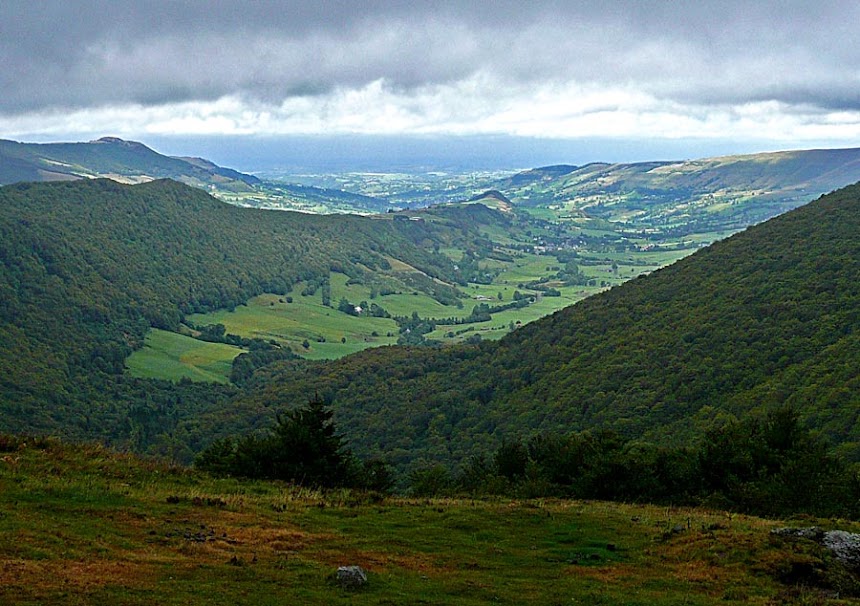 Looking toward Cheylade as we came down off the mountain
At Chamalières we drove up to the farm. At least three men saw us but just kind of looked the other way. One was on a tractor. I tried to talk to him but without much luck. It seemed hopeless. Lewis handed me a cell phone and asked me to call ahead to the Rodde family to see what the possibilities there might be. It was only 5 or 6 miles north. 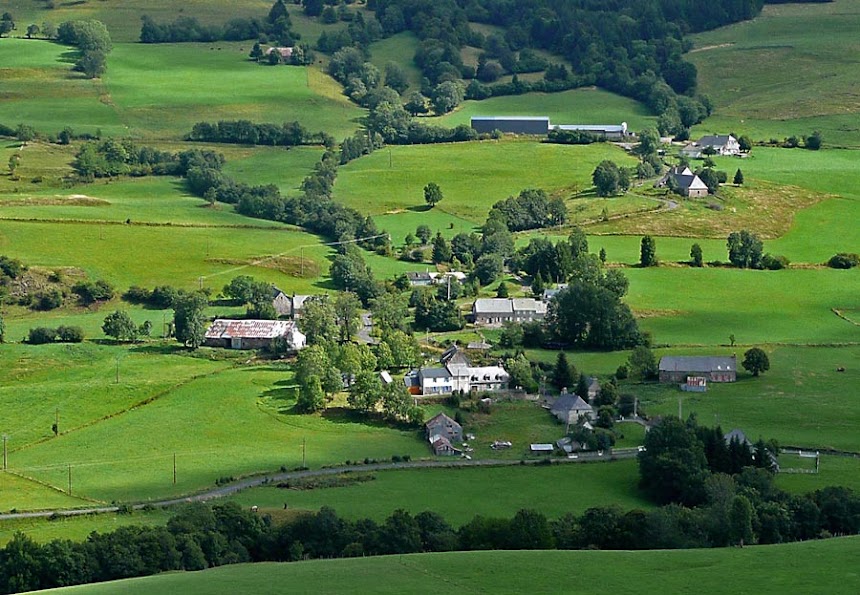 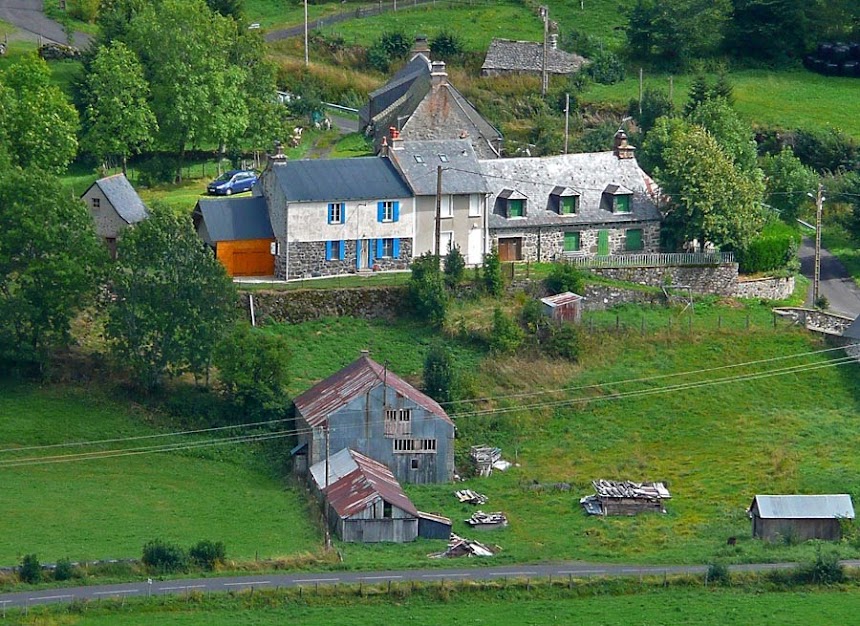 Views of the valley from the Chamalières dairy farm —
all we got there was views, no tour or cheese
We were on a quest. We were determined to see a dairy farm and the cheese-making process. Cantal cheese has been made since Roman times, they say. We all like it — we had bought some from a vendor at the market in Salers. When I got Mme Rodde on the phone, she said to hurry. The afternoon milking was about to begin...