Town or village... It certainly feels like a town, with its narrow winding streets, ramparts, and big central square. But it has fewer than 500 inhabitants, so I guess it is a village. It has a church, of course, and an outdoor market. Salers is in Cantal, in the Auvergne region.

Auvergne lost a lot of its population starting in the 19th century, when the railroads came in. Paris is full of "refugees" from the region. Life down there in those deep valleys, with a harsh climate, wasn't easy. But it's a fantastically beautiful area now. Green and a little empty. 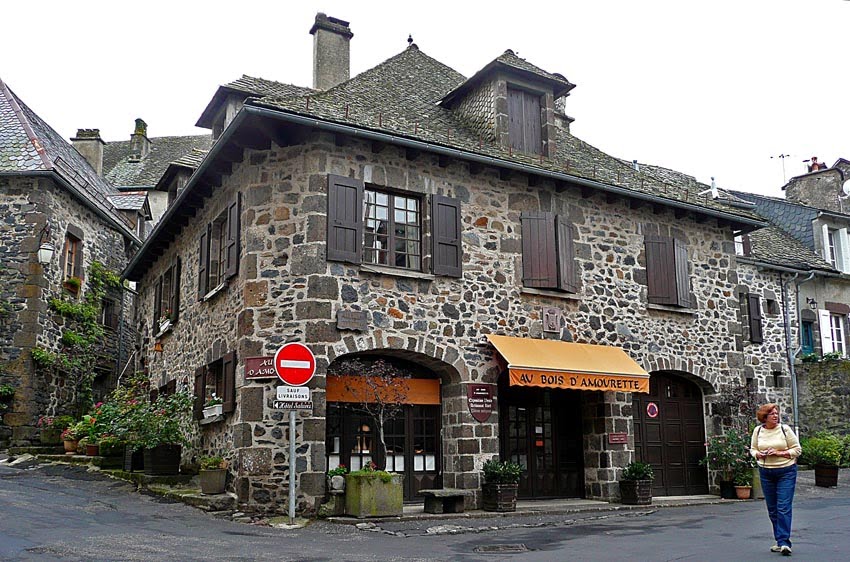 On the streets of Salers

The day we were there in early September it was very foggy. The sky was white, and you couldn't see the valley below the town because it was fogged in. We wandered around, taking pictures and enjoying the street scenes. It was all kind of dark and quiet at first. 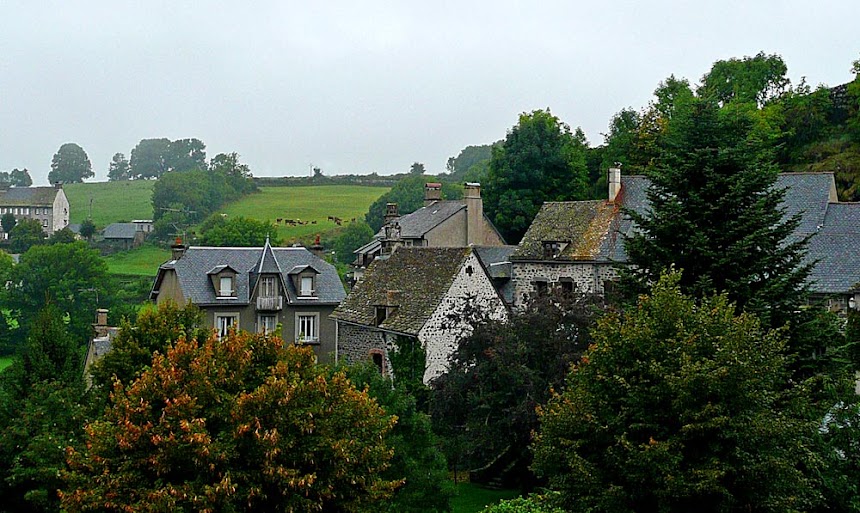 The dark volcanic lave stone that everything is built out of is hard to get used to. The fog that morning gave us a taste of what winter must be like — all in grays, blacks, and whites. At least in summer and early fall, however, the monotone quality of it is broken up by some greenery and plenty of flowers (a lot of red geraniums, as everywhere in France). 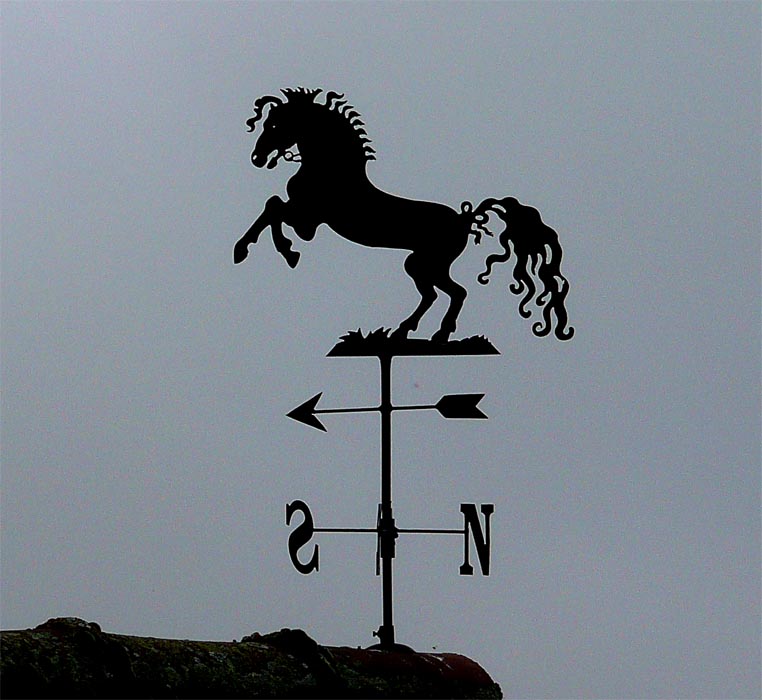 Most of the houses in Salers were built in the 1600s and 1700s, a period of prosperity for the town. It became the judicial center of the region, and a lot of well-to-do lawyers settled in. The wars of religion were ending, and France was entering into an era of relative political stability. The railroads hadn't yet arrived to take so many people away to Paris. 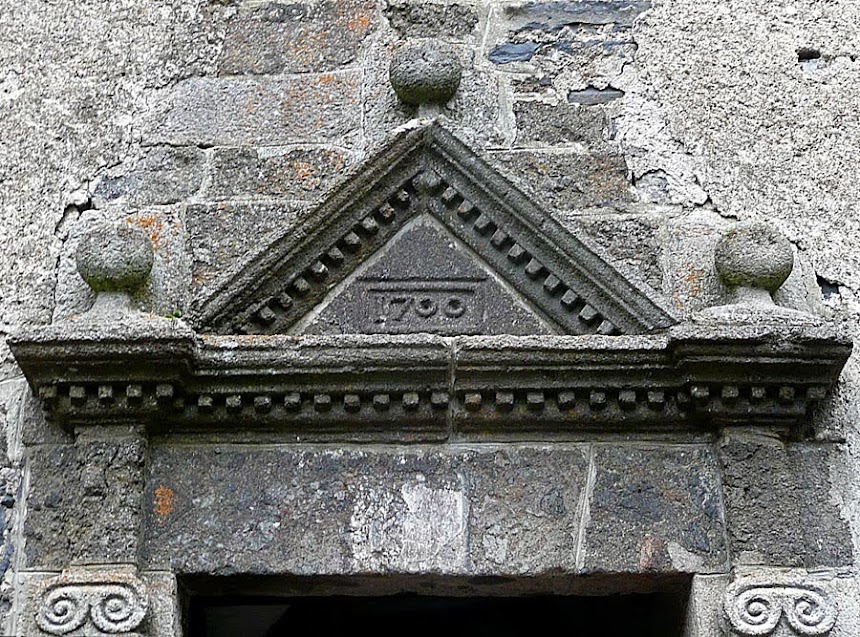 An old doorway with its decorations, dating from 1700

Salers was not deserted the day we walked around it. There was at least one busload of senior citizens — people our age, ha ha ha — clogging up the streets. We tried not to be engulfed by that crowd. Walking into a crowd with a dog on a leash is always a dangerous thing to do. Callie was glad to be out of the car and walking around, but she was a little confused by the whole experience. 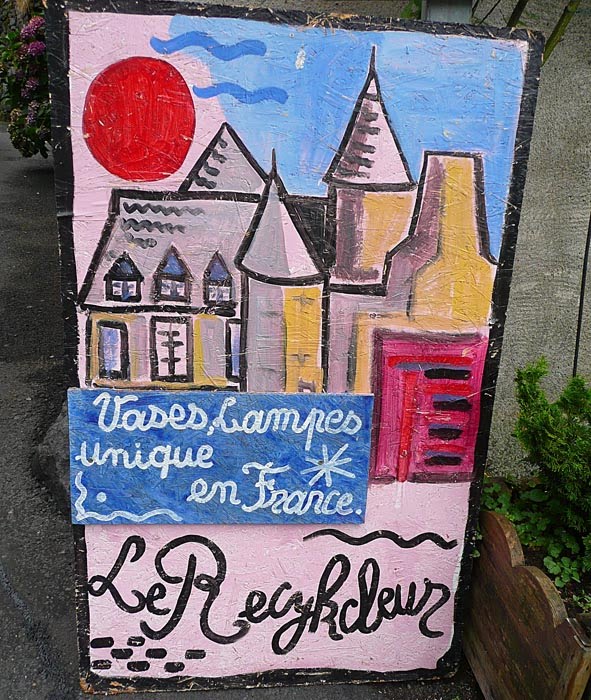 I bought some things: a bottle of apéritif wine made from the gentian plant, for example, and some cheese and ham at the market. We spent time talking to a woman who makes Salers and Cantal cheese just a ways west of town and sells it at the market from her truck. This was before we went to the dairy farm near Saint-Chamant, so we had a lot of questions. We looked inside several shops, and there was no lack of them. We tried to stay ahead of or behind the crowd of old people. 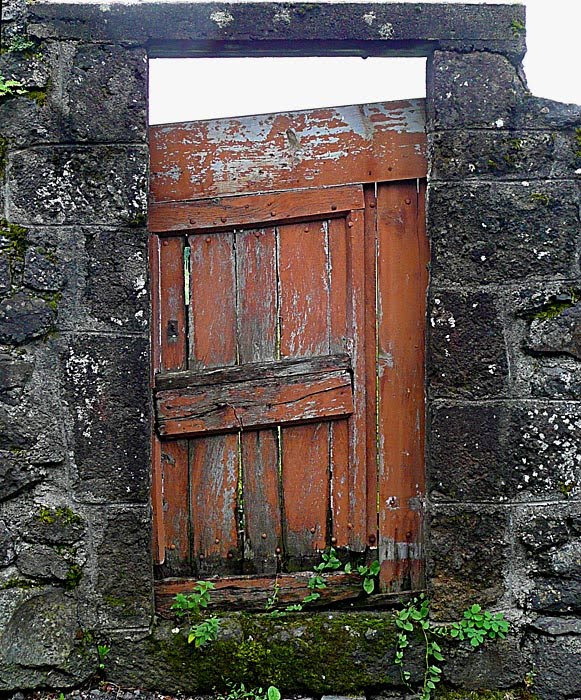 There's a lot of picturesque stuff to see in Salers.

Just as we were finishing our stroll and starting to think about lunch, the sun came out. But we had made our afternoon plan, which was to drive 25 miles north and see the Château de Val. The town of Mauriac looked like a good place for lunch, and we had pizzas in mind. But I'm not through with Salers (the town) yet.
Posted by Ken Broadhurst at 09:00