...mais pas pour moi. Bertie the black cat had rabbit for breakfast this morning. He seems to find rabbit particularly delicious. Tasha the sheltie pup tried to nose in and get some of Bertie's food, but I chased her away. I really like rabbit too — but mine doesn't come out of a foil cat food packet. It's sold fresh in French supermarkets or open-air markets and is considered to be a member of the poultry family. Out here in the country, some people raise them for food in outdoor cages. Walt and I have cooked rabbit (du lapin in French) for lunch or dinner at Easter every year since 1984. We were living in a flat on Capitol Hill in Washington DC back then. Easter rolled around, and we talked about what we would have as a special meal. Thoughts of the Easter Bunny made rabbit jump (get it?) into my mind. We hadn't been back to France in about two years at that point, and I missed having rabbit as a regular choice on restaurant menus, the way you do in Paris and all of France. 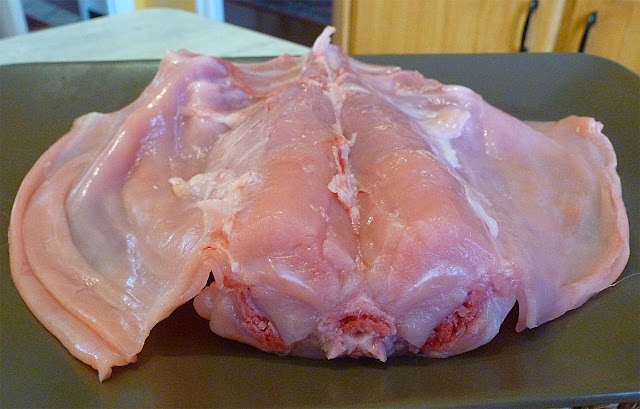 I don't know where I found a rabbit in DC, but I did. Maybe it was at Eastern Market, a market hall located close to where we lived. I'm talking about farm-raised, domestic rabbit, not the wild beast. I probably cooked it « en gibelotte », which is a stew made with a cut-up rabbit, some onions, garlic, herbs, mushrooms, bacon lardons, and white wine. As I've said, that was the first of some 35 Easter rabbits we've enjoyed feasting on over the years, prepared in many different ways. One classic is rabbit in a Dijon mustard sauce. 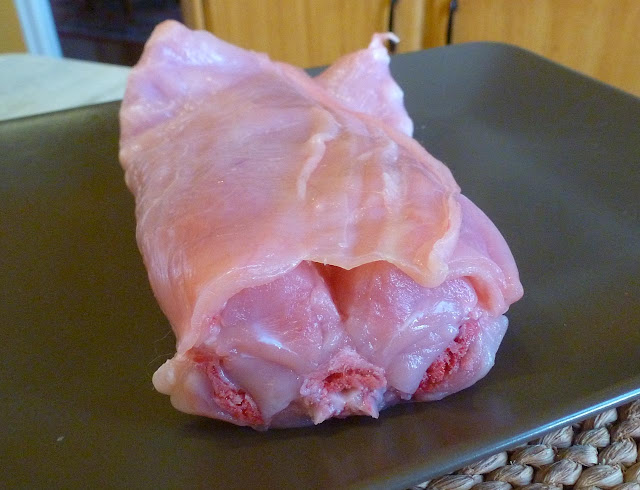 This year, instead of a whole rabbit, I decided to buy just the choicest cut in all rabbitdom, the "saddle" or râble. I ordered six pieces, not knowing how much each would weigh, and figuring we could put extras in the freezer for later. The râble is the piece that runs from the shoulder to the back legs (which are the second-best pieces to eat), and includes the two plump strips of white meat that run along each side of the animal's spine. It also includes two thin "wings" of meat that are the abdominal muscles, as you can see in the photos above. You might decide to cut those off and dice them up to add to the stew. 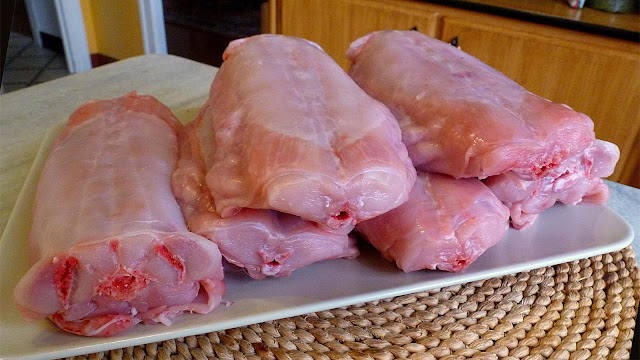 The râble also comes with the rabbit's liver and kidneys, and all those morsels are very good to eat too. They can be cooked in a stew or braise with the rest of the rabbit pieces, or they can be made into a separate dish. And using those flaps of abdominal muscle folded and pinned around it, one option is to fill the râble with stuffing and roast it. The liver and kidneys can go into the stuffing, along with sausage meat, onions, herbs, and bread crumbs. But that's not what I did...
Posted by Ken Broadhurst at 07:00