Années, je veux dire. Today is the 30th anniversary of Walt's and my vie commune. How's that for franglais ? We're going out for a nice lunch in the town of Bracieux, just south of the Château de Chambord. The restaurant is Au Relais d'Artémis (link).

Our friend CHM arrives from Paris by train at noon, and we'll pick him up at the train station in Blois. It's not far from there to Bracieux. He has invited us to lunch at the restaurant, because we are also celebrating the 30-year anniversary of our friendship. CHM hired me as his assistant when he (we) worked in Washington DC, and my first day on the job was the first Monday in January 1983. We've been friends ever since. 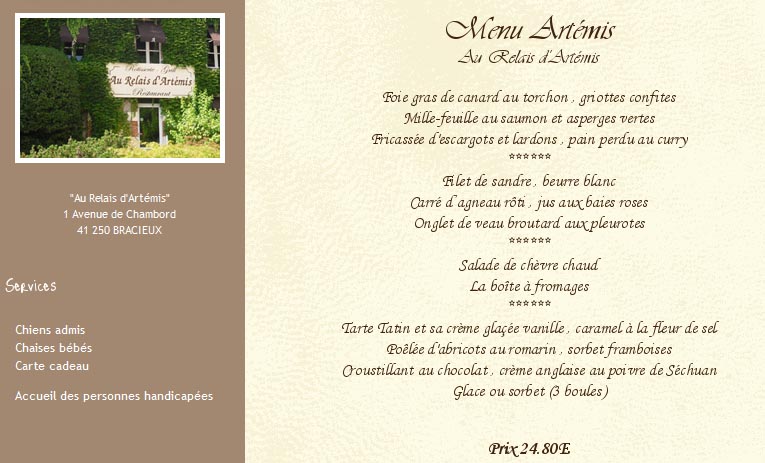 Here's the menu we plan to choose from at the restaurant in Bracieux. I'm thinking mille-feuille of salmon and
green asparagus as a starter, and veal with oyster mushrooms as a main course.

So there you have it. The weather is supposed to be sunny for the next four or five days. CHM will stay with us for a week, and we're going to a party with some local friends and fellow bloggers on Monday. On Tuesday, I'll be cooking up a batch of Brunswick Stew, a southern U.S. speciality, because CHM said he'd like to try it. I'm going to make it with rabbit and turkey, onions, herbs, tomatoes, beans, okra, and corn.

One of the roofers I contacted by e-mail answered me! He asked me which day next week would be best for him to come over and evaluate the problem. Maybe there's light at the end of the tunnel. Since the roof only leaks when we have very hard rain, we're safe for a while now. But the roof needs to be repaired before we can repair the water damage in the kitchen.

By the way, the real trente glorieuses (années) were the years from 1945 until the mid-1970s, when France and other European countries saw growth rates and standards of living soar.
Posted by Ken Broadhurst at 08:00