We have a row of grapevines in our back yard. They're table grapes of some kind. They're planted in the shade of several trees and I think they don't get enough sun. Therefore they don't produce very many grapes, and the grapes that do form never really ripen — they're small and sour. The vines were there when we bought the house, and we are slowly letting them die out.


So the vines produce almost no good grapes, but plenty of nice green leaves appear on the plants in the spring. In a wet year like this one, the leaves are expecially beautiful and tender. We don't ever treat the vines with any chemicals of any kind, so our grape leaves are completely organic. We eat them.

The way you eat the leaves is to make “dolmas” — grapevine leaves rolled up around a little ball of stuffing. You can make a stuffing of meat, or just use rice. In fact, now we know that you can use millet in place of the rice, and it's delicious. What makes it delicious is a combination of flavor ingredients that includes olive oil, onion, garlic, raisins, mint, parsley, and lemon juice.


Yesterday morning, before it started raining (again), I went out and cut about 40 nice green leaves off the grapevines. I washed them well in water and then blanched them six or eight at a time in boiling water. It takes only a minute or two for the leaves to soften and change color in the boiling water. Then they get plunged into a big basin of cold water to stop the cooking. 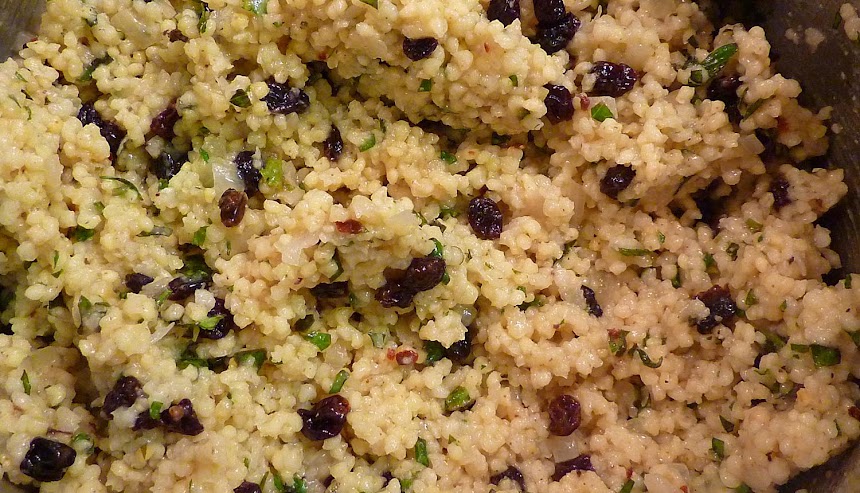 Meanwhile, you cook a batch of rice or millet (or some other grain: quinoa, bulgur wheat...). The stuffing for three dozen or so dolmas requires about 200 grams (1 cup) of millet or rice and 40 cl (1½ cups) of water or chicken broth. You want the grain just partially cooked, so it doesn't need more water than that. First, sauté some onion and garlic along with the raw grain in olive oil, and when the onion is transparent add the liquid.


When the rice or millet has absorbed all the liquid, turn off the heat and stir in about a quarter of a cup of the little raisins that we call "currants" and which are really raisins de Corinthe (or use chopped raisins) and about the same amount of finely chopped fresh mint (or some other herb). Add salt and pepper (and, optionally, a pinch of crushed hot red pepper) and the juice of a lemon. Stir it all together and let it cool down. Save the squeezed lemon because the rind will cook with the dolmas later. 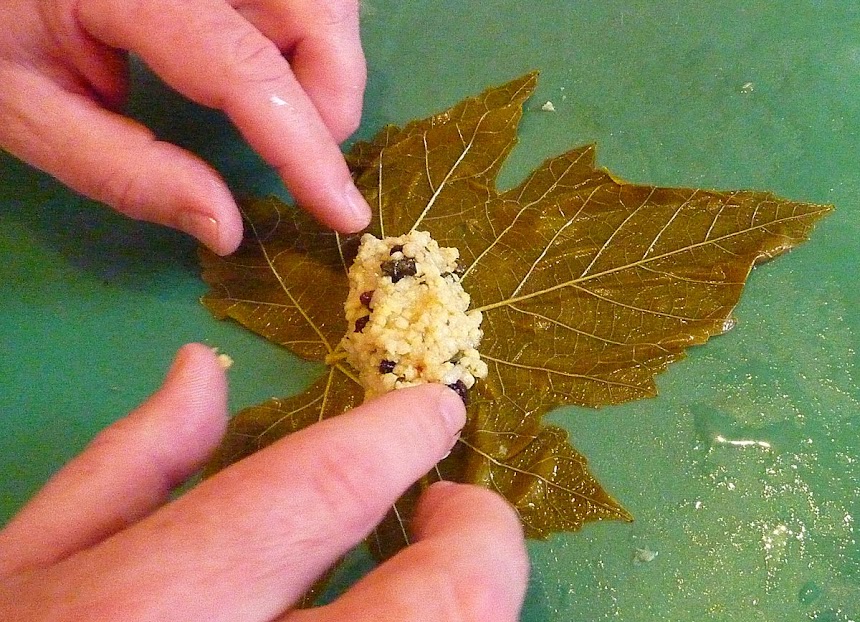 Roll up the leaf around a lump of the millet or rice stuffing.


When the stuffing is cool enough to work with, spread a blanched grapevine leaf out on a work surface and put a lump of the stuffing mix on it (for the best appearance, lay the leaves out with the underside up). Fold the side "flaps" of the leaf over the stuffing and then roll the whole thing up into a little log shape. Repeat this operation about three dozen times. 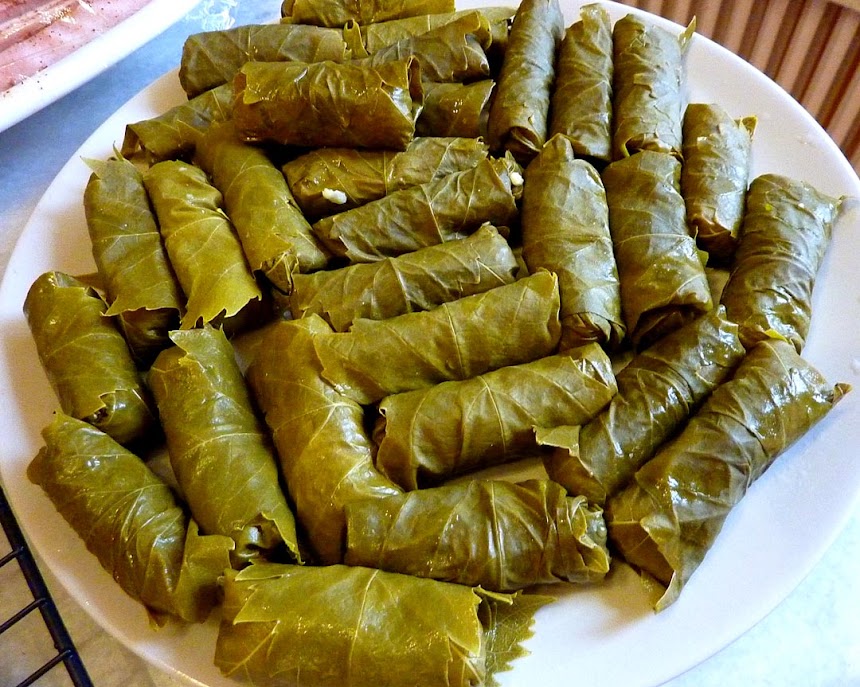 
Arrange the stuffed leaves on a thin film of olive oil in a shallow pan so they they are packed in enough to hold together as they cook. Pour on enough hot water to just barely cover the dolmas (or even less — you can add more during the cooking.) Chop up the lemon rind and scatter the pieces over the top, along with some branches of parsley and a sprinkle of salt and pepper. 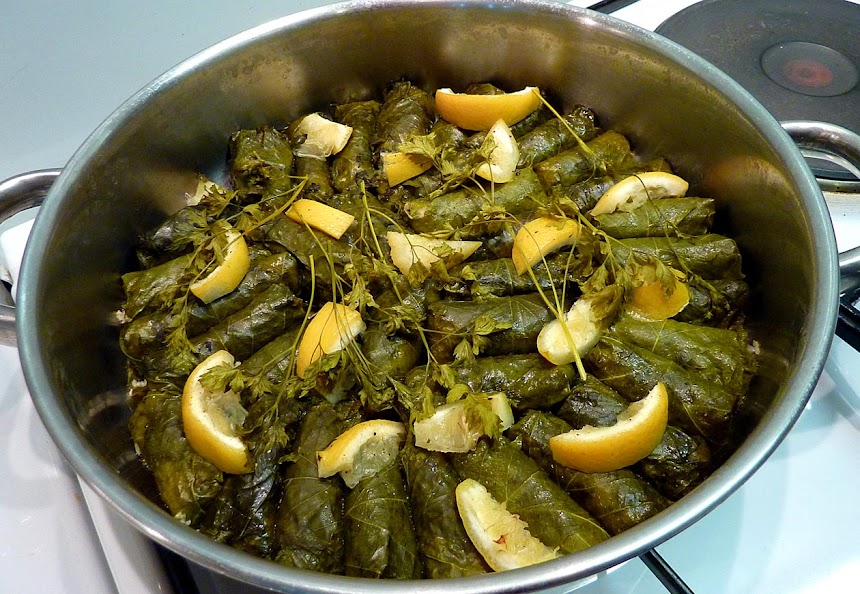 The dolmas after an hour in the oven


After an hour in the oven, during which the stuffing and the leaves will finish cooking, take the pan out and let it cool. Then take the dolmas out and put them in the refrigerator for a couple of hours (or a day or two). Serve them cold as an hors-d'œuvre or appetizer. They are good with a yogurt or cream sauce made with grated cucumber and more mint (or dill) and lemon juice.
Posted by Ken Broadhurst at 07:55