“Hailstones the size of hens' eggs.” That's how they are describing the disaster that struck the Vouvray area early yesterday morning. They say that about three-quarters of the 5,000 acres of vines in the Vouvray wine appellation might have been severely damaged in just 15 minutes' time. There was a foot of ice on the ground in some areas. Roof tiles were broken, cars heavily damaged, and so on. 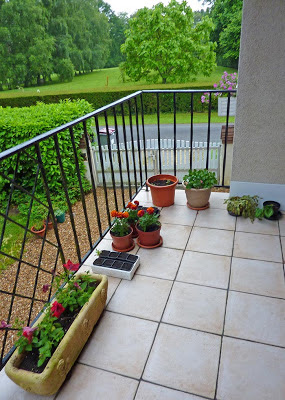 We were luckier here in Saint-Aignan, which is 35 miles southeast of Vouvray. We heard the thunder in the distance early in the morning. But our weather was fine until mid-afternoon, when a light but steady rain began to fall. It's supposed to rain all week, but so far we haven't had any intense downpours of the kind that caused our roof to leak earlier in the month.


Still, I decided yesterday morning that it would be a good idea to put the car in the garage, just in case we ended up under a shower of hailstones. The car was one less thing to worry about. For now, our garden and our neighbors' vines have been spared.

This morning it's raining and incredibly dark and gloomy for mid-June. We spent the weekend working in the yard and re-potting plants to set out on the terrace. But now the terrace is all dressed up with nowhere to go — it's too damp and chilly for us to enjoy being out there.


There are articles, slideshows, and videos of some of the damage in the Vouvrillon (the area around Vouvray) on web site of the local newspaper, La Nouvelle République — here and here — if you want to see and read more.
Posted by Ken Broadhurst at 07:30