Did you know that the English word "core" comes from the French word « cœur », meaning heart? The word cœur isn't used systematically in French to mean "core" — the core of an apple is called le trognon — but some vegetables, including celery (stalks) and lettuce, do have a "heart", which is the finest, tenderest, and most delicious part to eat. Another "vegetable" used in salads in France is hearts of palm, or cœurs de palmier. 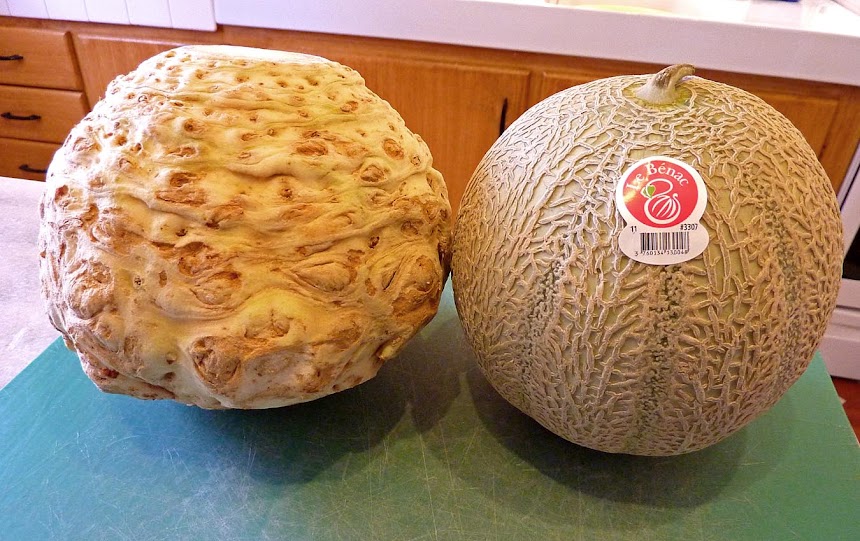 This photo of a celery root or celeriac, with a melon next to it for scale, has nothing much to do with the rest of this post.
However, a céleri-rave does have a kind of core or cœur, which can be pithy or just hollow.

I haven't meant to be mysterious about my recent doctor appointments in Blois. They have to do with my heart, and the doctor is a cardiologue, but we don't think there's anything serious going on. I went to see him for a routine exam, because of my age. He told me that I have a slightly irregular heartbeat, but I believe I have had it for many years — maybe since childhood, when I had scarlet fever.

In French, what I have, he said, is beaucoup d'extrasystoles, une extrasystolie, or une prématurité. In English, it's called a "premature ventricular contraction" (PVC). The cardio asked me to wear a heart monitor called a "holter" (after the name of the doctor who invented it) for 24 hours so that he could see if the PVC is constant or is more frequent at certain times of the day or related to physical activity. I'll get results this week.
Posted by Ken Broadhurst at 08:22