I had never made Brunswick Stew before last week. At least I can't remember making it, and Walt too says he doesn't think I ever had made it before. I ate some while I was in North Carolina in April and even though I didn't think it was very good, it was still on my mind. I knew I could do better. The N.C. restaurant version was just too sweet — they put in too much ketchup, I think. 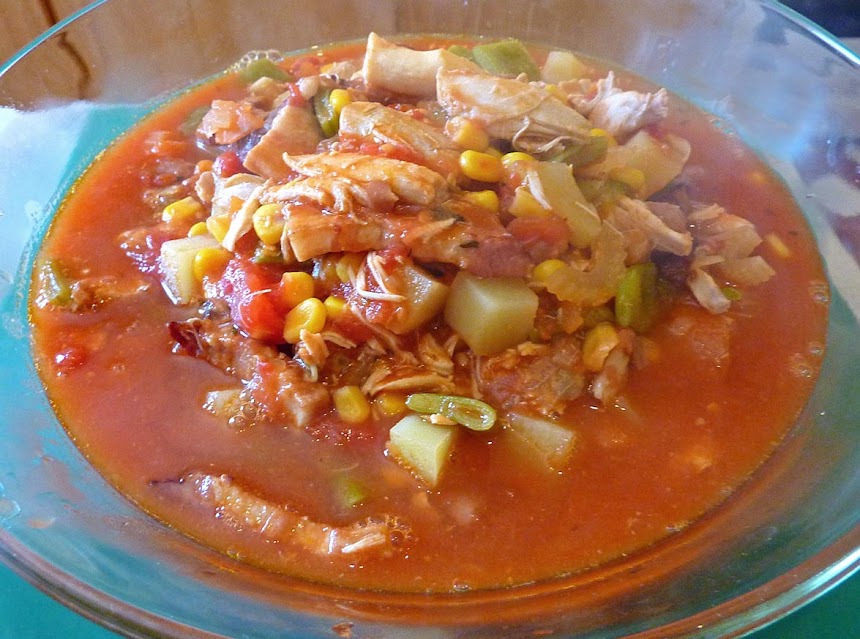 Brunswick Stew, a specialty of Virginia, the Carolinas, and Georgia
The Brunswick in the name of the stew apparently refers to Brunswick County in Virginia. Or to Brunswick County in North Carolina. Or maybe to the town of Brunswick in Georgia. Virginia seems the most likely birthplace for the stew, which was traditionally made with rabbit or squirrel, back in the 18th or 19th century. It's a tomato-based concoction containing a lot of fresh vegetables. 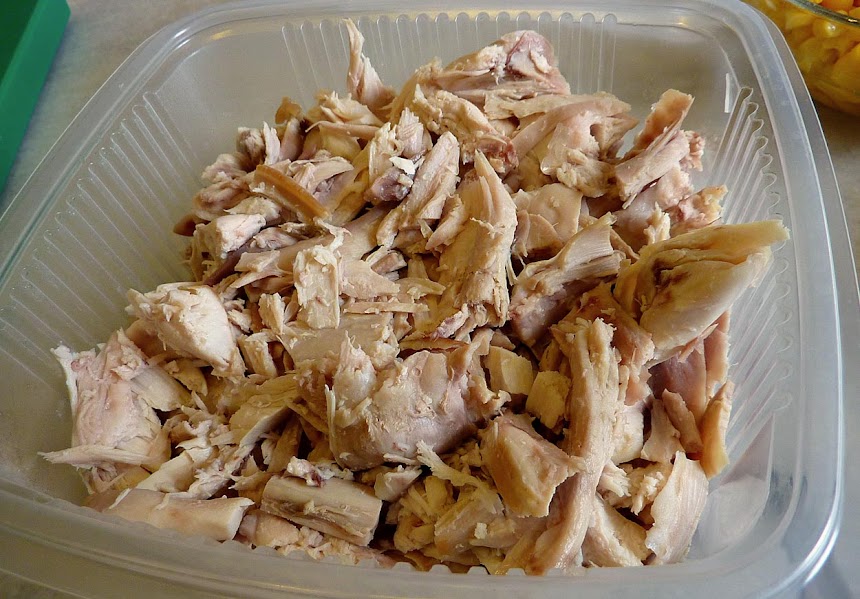 Shredded, chopped chicken, turkey, or rabbit. This is rabbit. I've spared you the pictures of the whole bunny.
In the 20th and 21st centuries, chicken has replaced game animals in Brunswick Stew. Here in France, where it's easy to buy rabbit on the markets or in the supermarkets, I decided chicken would be just too humdrum. As for the vegetables that go into the pot, the only one I couldn't find was lima beans. I used some Portuguese haricots beurre, which resemble pinto beans when they are cooked, in their place. Another good option in France (or elsewhere) would be flageolet beans.

It wouldn't be Southern — or French — without some smoked or salt-cured pork bacon. Or ham.
Here's a list of ingredients. The main ones are the rabbit (or chicken), and one big tin of whole cooked tomatoes, with their juice. The rest are optional, and the amounts of each aren't crucial.
Rabbit, chicken, or turkey • Smoked pork belly • Broth • Celery • Onions • Garlic • Tomatoes and juice • Tomato paste
Carrot • Lima, flageolet, or other beans • Green beans • Corn • Okra • Potato • Green pepper
Vinegar (very little) • Ketchup (very little) • Hot pepper flakes or chopped jalapeño peppers
Thyme • Rosemary • Oregano • Bay leaf • Salt and pepper 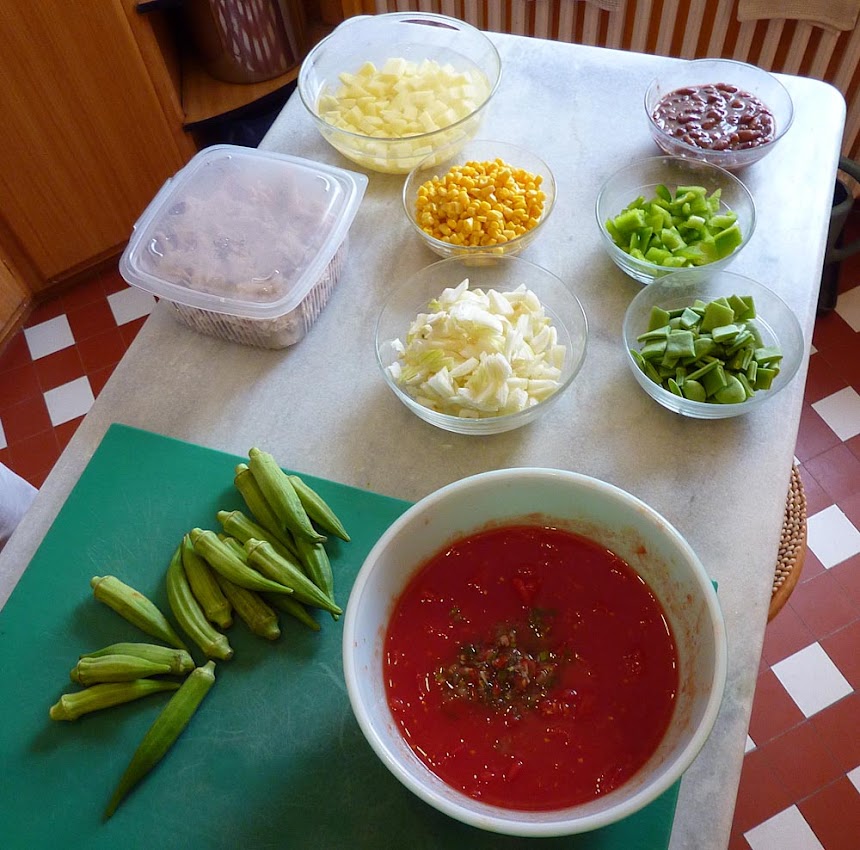 Some meat and a lot of vegetables
The first step in making Brunswick Stew is cooking the meat and making the broth that serves as its base. It's easy — you just brown the chicken or rabbit lightly in vegetable oil and then pour on enough water to cover the meat. Cut the chicken up or not, as you wish. Season the water with salt and pepper, and add in a couple of bay leaves. I nearly always put in a few allspice berries (poivre de la Jamaïque) or a clove (clou de girofle) too whenever I simmer or braise poultry.
Let the rabbit or chicken cook at a low simmer until it is completely cooked. Take it out of the broth and then boil the broth down to reduce and concentrate it as you like.  When the chicken has cooled enough that you can handle it easily, pull the meat off the bones, which you can discard. Tear the meat into shreds or chop it roughly with a knife and put it aside. 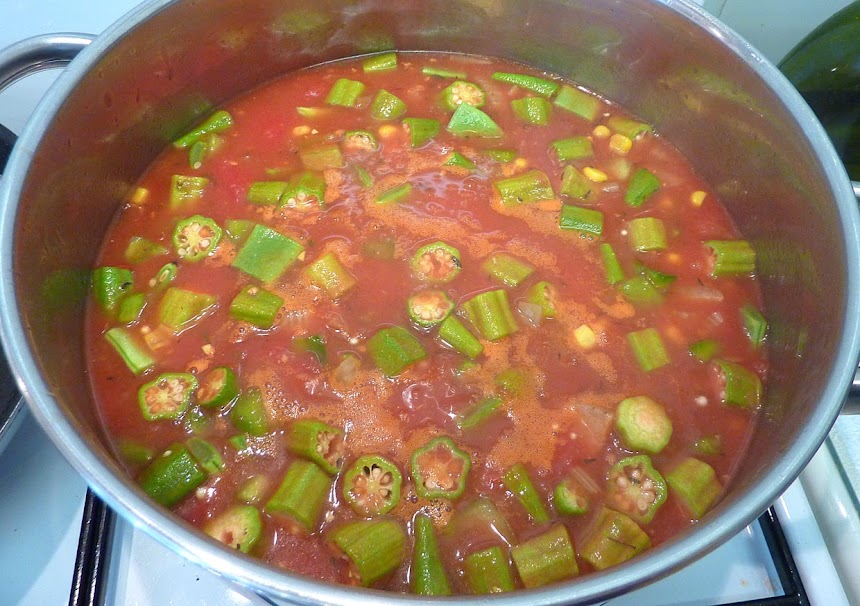 Okra helps thicken the stew, but it's optional.
Strain any peppercorns or allspice berries and the bay leaves out of the broth. Open the can of tomatoes and chop them roughly. Add the tomatoes and, if you use it, the carrot, chopped (it needs time to cook completely), along with the herbs and hot pepper. Let the liquid simmer for 20 minutes.
Meanwhile, sauté chopped onion, garlic, and celery in a frying pan with smoked pork (bacon or diced ham). When the pork is browned and cooked and the aromatic vegetables are tender, add them (but not all the fat) to the pot of simmering liquid. Also add a tablespoon or two of ketchup and/or tomato paste, and a dash of vinegar.
Then add the other vegetables. Use fresh or frozen okra (optional), green pepper, and green beans, but make sure you use either fresh, frozen, canned, or pre-cooked lima or other beans, because dried beans won't have enough time to get done in the stew. Corn can be fresh, canned, or frozen. Let the pot simmer for another 20 to 30 minutes, and then add a cup or so of diced potato. After another 20 to 30 minutes, all the vegetables will be cooked. 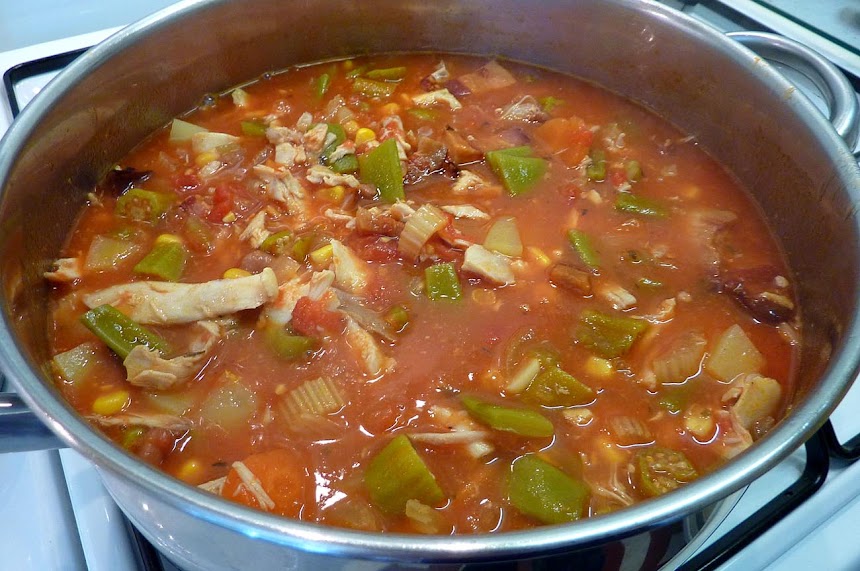 Add the cooked poultry or rabbit to the stew at the last minute, just to heat through.
That's when you add in the shredded, chopped chicken or rabbit. It's already cooked, so it just needs to heat through in the liquid. The stew should be thick — it's not soup. Okra will help thicken it (and give it authentic flavor), as will some of the liquid from cooked dried beans along with a small amount of tomato ketchup.
That's it. It's just a matter of getting all the vegetables done as you like them at the same time. If there's too much liquid, pour some off, or use a slotted spoon to serve the meat and vegetables so that they aren't swimming in liquid. Walt and I ate leftovers with cooked rice and that was good too.
Posted by Ken Broadhurst at 07:45