There's an awful lot of reading to do this morning, after yesterday's two U.S. Supreme Court decisions on marriage laws and benefits. I'm pretty happy about both — especially the one requiring the federal government to recognized all marriages performed legally in all the states. I'm glad too that California can go back to being the enlightened, forward-moving state that I think it is.

Anyway, I'll do my reading and reflecting and post just a few pictures of some plants that I and relatives and friends have imported to Saint-Aignan over the past 10 years. The first is one that I got from my mother before she sold her house in 2005 and moved into an apartment, where she doesn't have to worry about maintenance (things like a leaky roof). 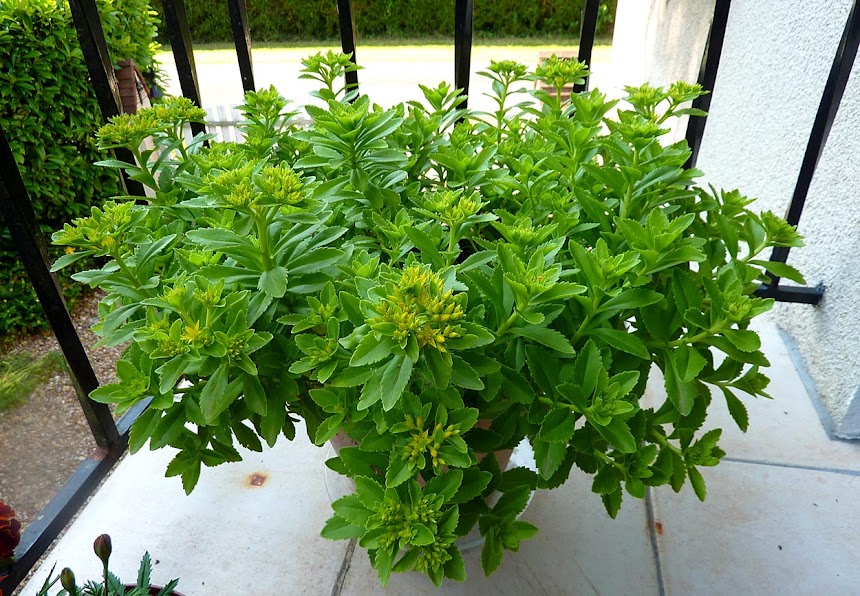 In 1997 I was on sabbatical from my job at Apple Computer (the software division, Claris, specifically). I flew to North Carolina from California that summer, and my mother and I went on a road trip. We drove about about a thousand miles (1600 km) from my home town out to Champaign, Illinois — where I lived in the 1970s — and back. In the town of Carbondale, we collected a few cuttings of a nice sedum plant that has bright yellow flowers (maybe Sedum floriferum). I think this sedum variety might originally have been a European plant. 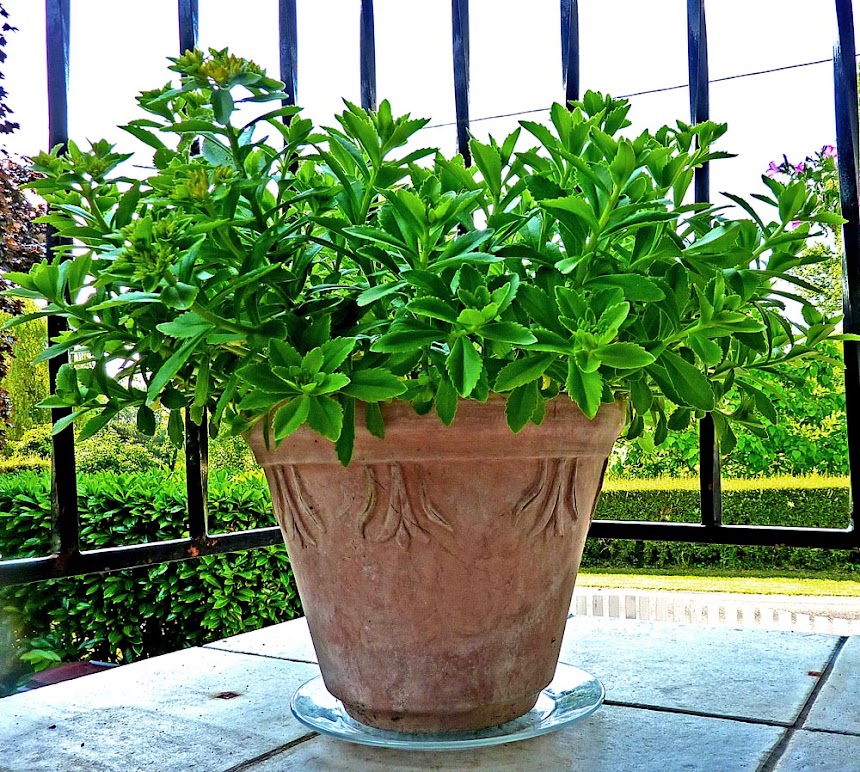 My mother kept the plant growing in her garden for years. In 2005, when she was getting ready to move out of the house, I went to see her and help sort things out. I ended up bringing a few cuttings from the sedum plant back to France with me. I've tried planting the sedum in different places around the yard and garden, but without a lot of success — until now. Last fall I dug up a clump of sedum and set it in a big pot. Look how it's growing this summer. 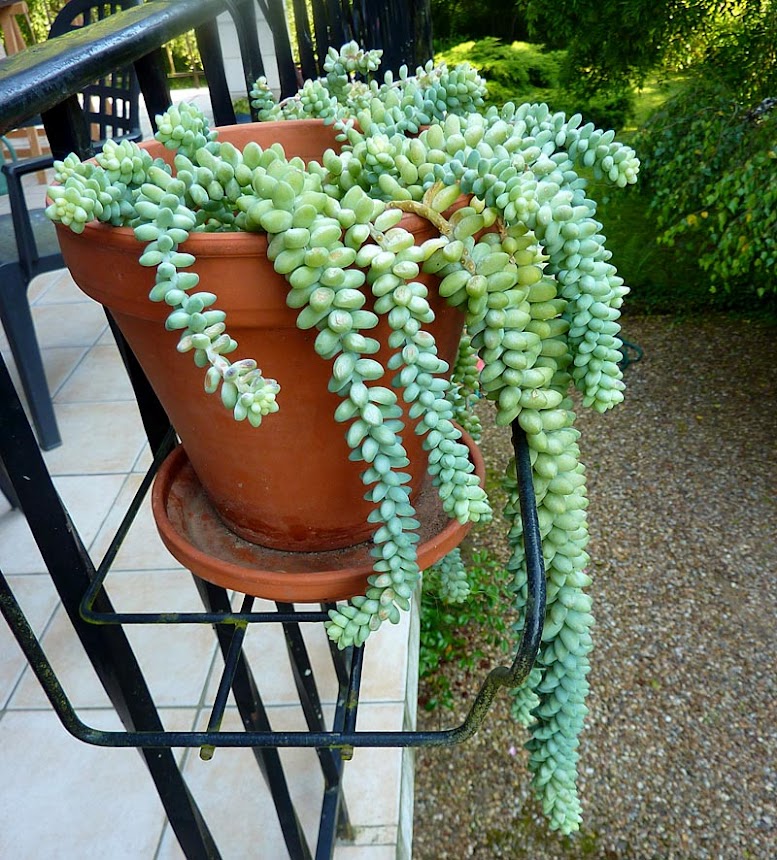 Another sedum plant that I brought back from North Carolina is called Donkey's Tail (Sedum morganianum). I've never seen one anywhere else in France. The ones in the picture above came from a very small piece of a plant that I actually found on the floor in a garden center in my home town. I scooped it up and put it in my shirt pocket. I brought it back to France. It grew. I put some in a second pot. That grew well too. 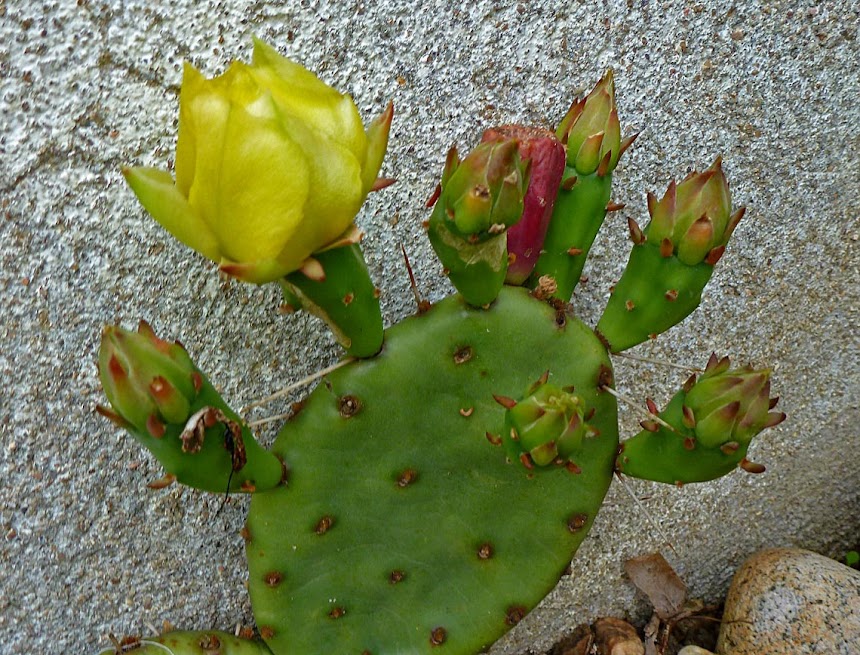 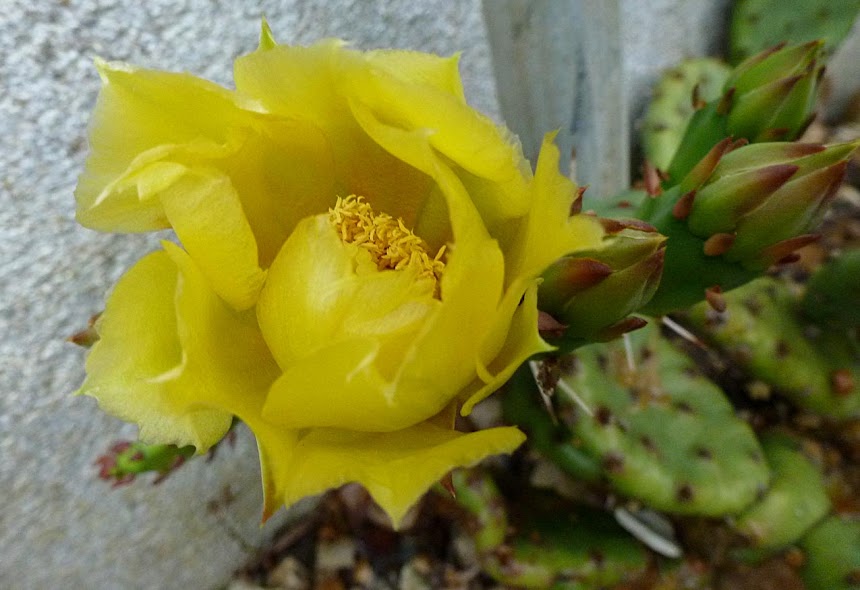 A third imported plant that I have growing is one that CHM brought me from Virginia. It's a cactus, and I've blogged about it before. It's in flower right now, so I want to post a photo for CHM to see. Voilà.
Posted by Ken Broadhurst at 07:30