I have a feeling that people in many countries find potatoes more appetizing than greens (including chard, collards, kale, and spinach). That's not surprising, and polls show that the potato is the most popular vegetable in France too. It's not for nothing that we call them "French fries."

Yesterday I posted a photo and brief description of the dish of "baker's wife potatoes" that I made a few days ago. Here's the recipe, translated from the French recipe I use. It's what's called a gratin in French, or a kind of scalloped potatoes in English — "to scallop" means to cut a vegetable or meat (veal scallopini, for example) into thin slices. 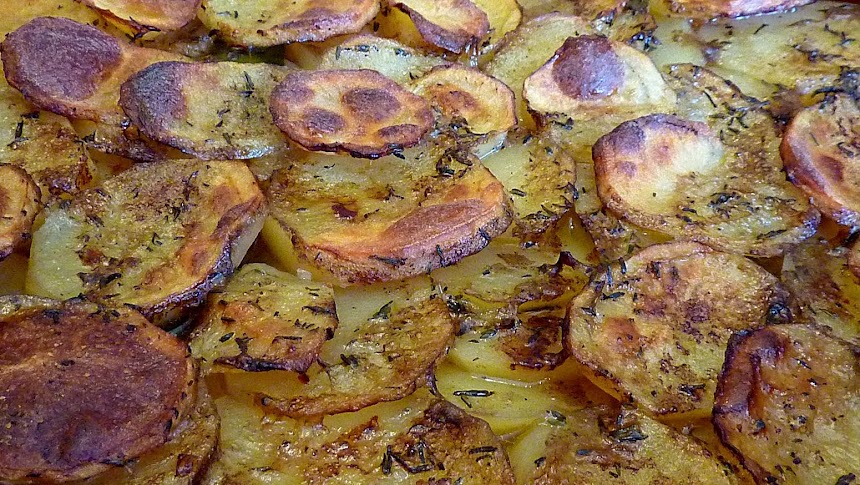 Put the broth on to heat up. Slice the onions and cook them on low heat in butter for 20 minutes.

Peel the potatoes and cut them into thin slices.

Butter a baking dish and arrange the potato slices and cooked onions in it in several layers. Season each layer with salt, pepper, and thyme. Pour on enough of the broth to not quite cover the potatoes.

Put the dish in the oven at 350ºF (180ºC) for about an hour. Keep at eye on it to make sure the potatoes don't brown too much or dry out. Add more (broth or water) as needed.

Test the potatoes for doneness by piercing them with a fork or a skewer. Serve hot.

The key to getting the potatoes done right is to put in just enough broth to moisten and tenderize them as they cook, but not so much that they are swimming in it. If you put in too much, there's always the possibility of pouring some off (don't burn yourself!) or sucking some out using a turkey baster toward the end of the cooking time, to let the potatoes dry out a little.

In his book on cooking potatoes — Le Meilleur et le plus simple de la pomme de terre : 100 recettes — French chef Joël Robuchon writes: "In times gone by, it was the custom to cook potatoes this way in the same pan with a roast of lamb or pork, so that the potatoes would be flavored by the meat juices as they cooked."
Posted by Ken Broadhurst at 07:30