I cooked the other rabbit. I had bought two that were sold as un lot — a package deal — and with the first one I made Brunswick Stew. With the second one, I made something similar but at the same time completely different: a North African couscous. Normally, you'd find it made with chicken and/or lamb. 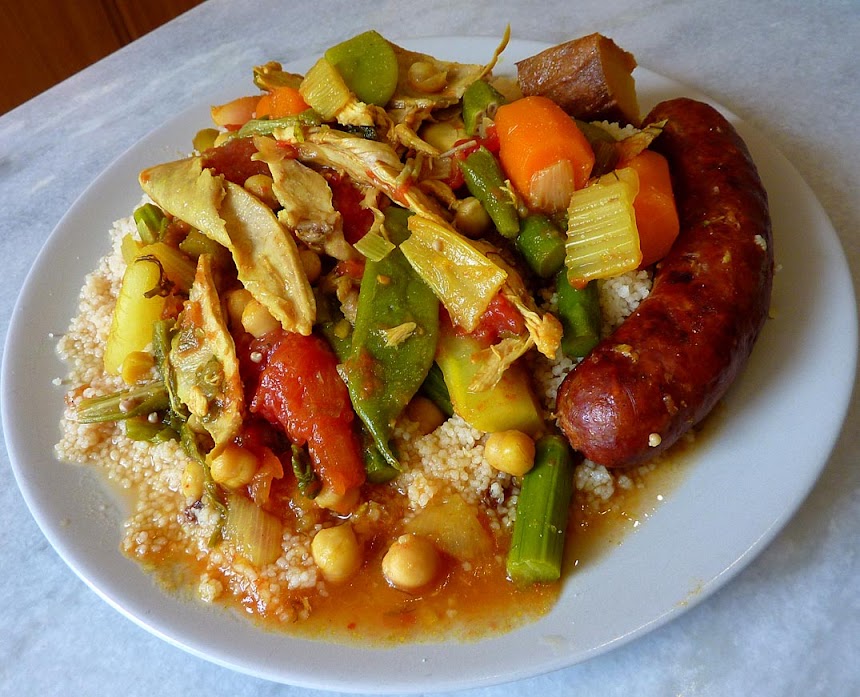 
As with the Brunswick Stew, the first step was to cook the rabbit by browning it lightly and then simmering it in a seasoned liquid to make broth. I browned the rabbit in a combination of canola and olive oil, and then I poured on enough water to cover it.

The seasonings were three small onions, three garlic cloves, half a dozen allspice berries, a dozen black peppercorns, and three bay leaves. Plus salt, of course. It simmered for an hour, and then I took it out of the liquid and let it cool. I strained the liquid to use as a base for the couscous broth.


Couscous is a kind of tomato-based soup or broth of meat and vegetables that is served with the cooked couscous "grain" — it's not a grain, actually, but a form of pasta. I had a big can of whole tomatoes in juice, and I had a lot of little bowls of cooked vegetables in the refrigerator or freezer, leftovers from recent meals. The main vegetables that you usually put in the couscous broth are onions, carrots, green beans, tomatoes, summer squash (green and yellow), turnips, and chickpeas. As you'll see from the photo below that I took and labeled, I had a greater variety than that, and it worked out really well. 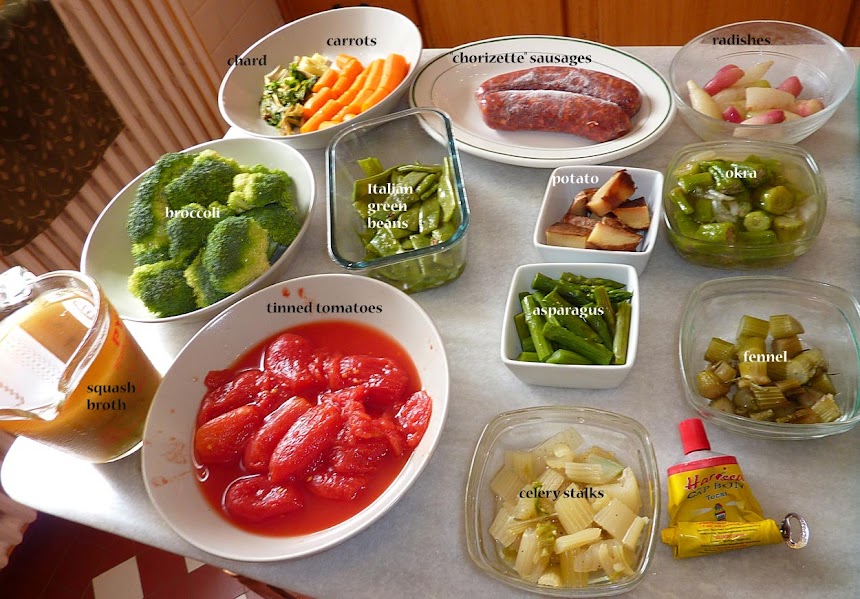 Ideas for vegetables you can put into couscous broth


As for the rabbit, I decided to do what I did when I made Brunswick Stew week before last. I pulled all the meat off the bones after the rabbit had cooked and cooled down. The rabbit cooking liquid made a good base for the couscous broth, and the large and small chunks of rabbit meat went into the soup, along with the juice from the tomatoes and the cooking liquid from all the other vegetables. Turmeric, cumin, hot red pepper flakes, and other North African spices gave it good flavor. 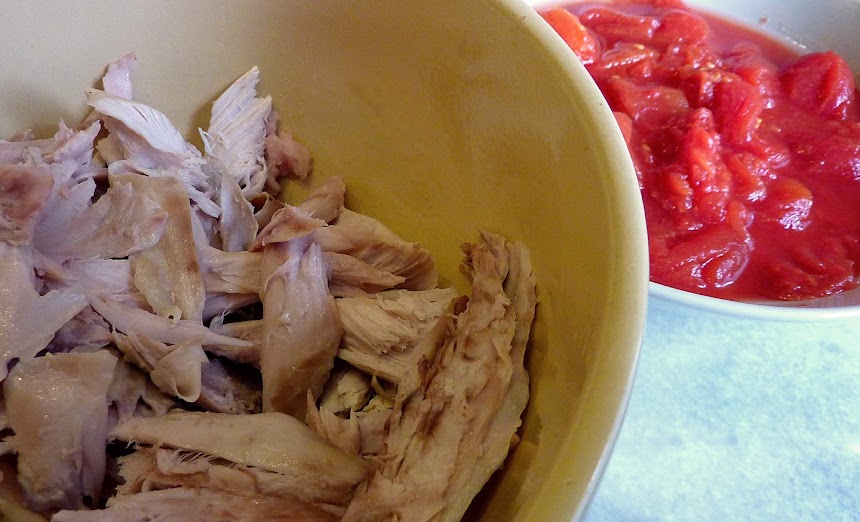 "Pulled" rabbit meat and tomatoes from a tin

The other meat you usually have with couscous is the spicy little lamb and/or beef sausage called a merguez [mehr-GUEHZ]. We didn't have any merguez sausages, but we had some similar but fatter sausages that we got at SuperU. They were sold as « chorizettes » — little Spanish chorizos (see the photos above). They were really good with the couscous. In France, you can find merguez sausages in any supermarket. 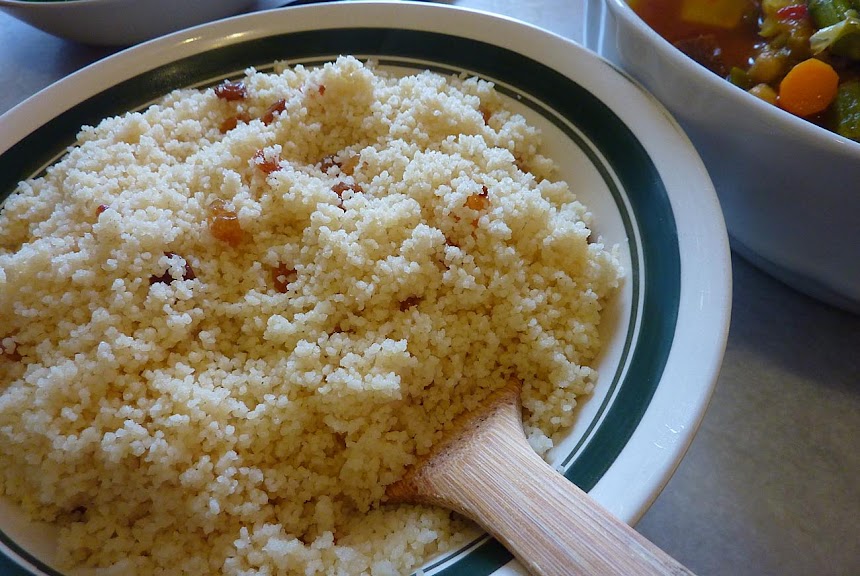 
Finally, you cook the couscous "grain" or semoule. It can be steamed over the broth in a special pot called a couscousier, or it can be quick-cooked according to the directions on the package it comes in. We did the quick cooking this time, and we added a handful of raisins to the semoule. You serve some couscous grain on your plate and then you put vegetables, meats, and some of the spicy broth over it. 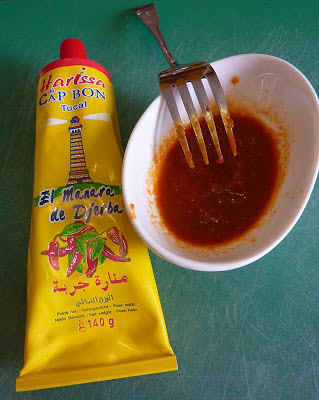 Another indispensable condiment to have with couscous is some of the hot red pepper paste called harissa. If you like your couscous extra-spicy, take a ladleful of the broth and squirt a tablespoon or so of harissa paste into it. Stir it with a fork to mix it all up and then dribble it over the pile of semoule and vegetables. Try it — you'll like it.

The combination of hot peppery broth and sausages, sweet carrots, and even sweeter raisins that explode in your mouth when you bite into them... well, it's amazing. And you get all those vegetables and the rabbit (or chicken) meat as a bonus.
Posted by Ken Broadhurst at 07:50