I love to cook and eat turkey legs — cuisses de dinde, which means thigh and the drumstick. They respond well to slow cooking with spices and a vinegar baste, or to simmering in wine, red or white, with herbs. They also are good just roasted. This one is roasted but with a glaze of honey and soy sauce. I saw a chef prepare it on a French cooking show. 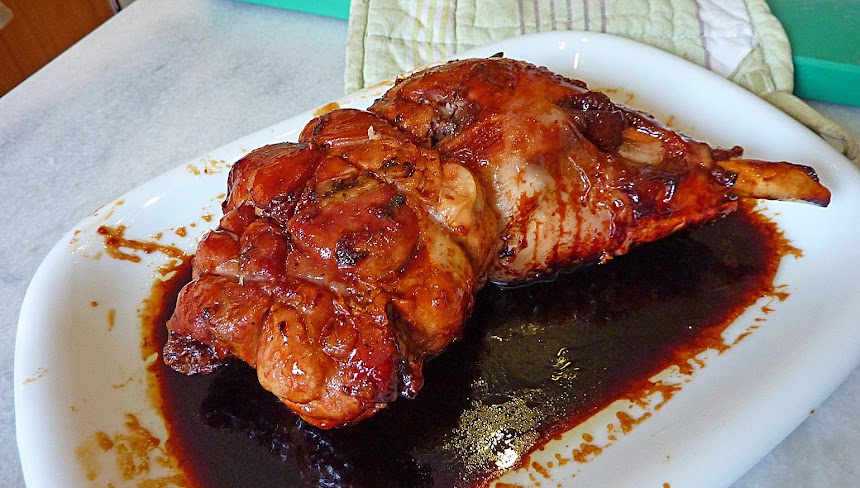 A turkey leg roasted and basted with honey and soy sauce


One little refinement on this particular method of cooking a cuisse de dinde is that the thigh section is boned out, seasoned inside, and then rolled and tied to make it into a nice roast. I seasoned the meat where I cut the thigh bone out with thyme, ginger, salt, and pepper. Then I tied it up with kitchen twine. You can vary the seasonings: garlic, rosemary, oregano, or other combinations of aromatics would be good. 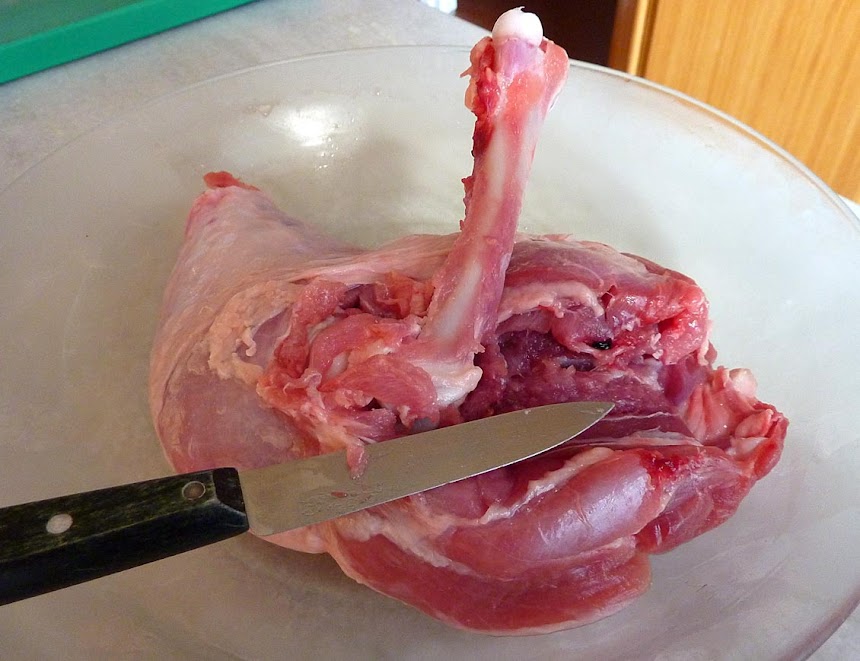 
It's pretty easy to tie up the de-boned thigh piece. You can use three or four lengths of twine, or, as I did, just one long piece looped carefully around the meat and then tied off at each end. I'm not a pro, and my ficelage is pretty rustic, I guess. It works, though. Anyway, you take the string off before you bring the roast to the table for carving and serving. 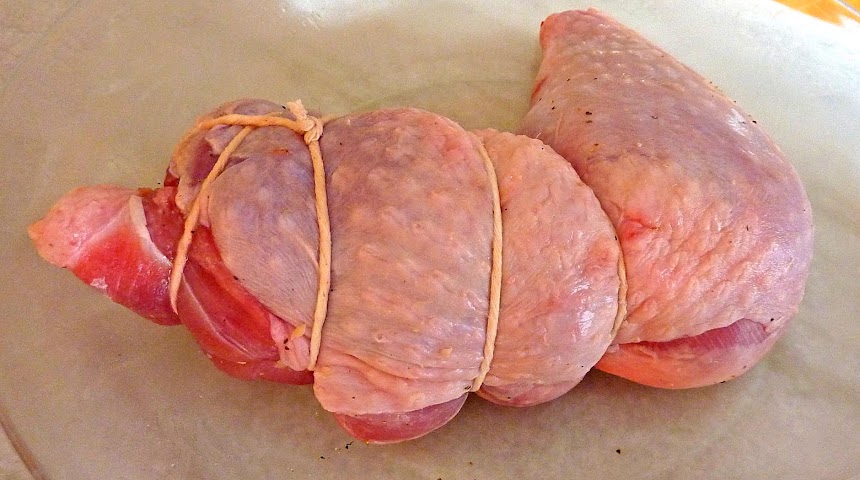 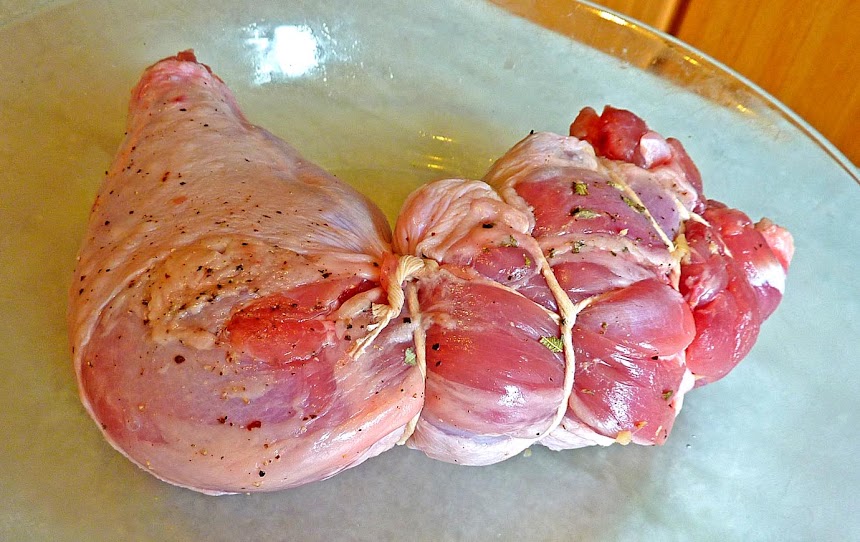 A turkey leg with the thigh section de-boned, rolled, and tied, seen from both sides

To cook the roast, rub it with vegetable oil and put it in a hot oven (450ºF, 240ºC). After 10 or 15 minutes, when the skin is starting to take on a golden brown color, pull the pan or dish out of the oven and drizzle or brush honey all over the skin. Pour some soy sauce and maybe a little white wine into the bottom of the pan. Add some crushed red pepper flakes if you want. Then put the pan back into the oven, turn the temperature down to 350ºF/180ºC, and let the roasting continue. 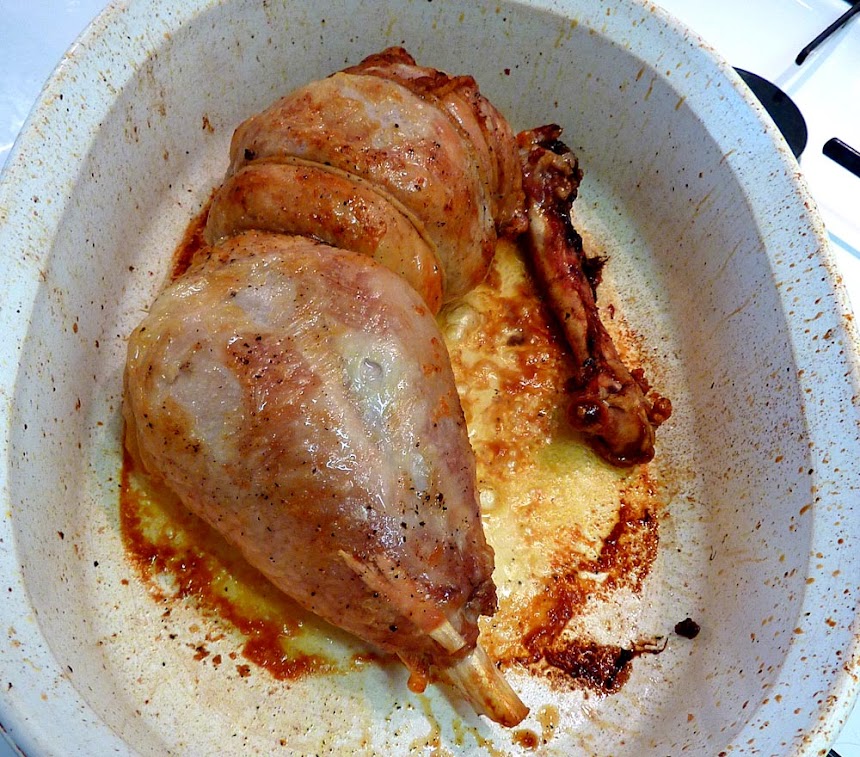 After a few minutes in the hot oven, the roast is ready to be glazed with honey.

Baste the turkey roast every 10 or 15 minutes with the sauce and drippings. I will be cooked after 45 minutes to an hour. You be the judge. It can't really be over-done, as far as I'm concerned, as long as it doesn't dry out too much. Add a little water to the pan as necessary — sparingly — to keep the sauce liquid (but not too watered down). 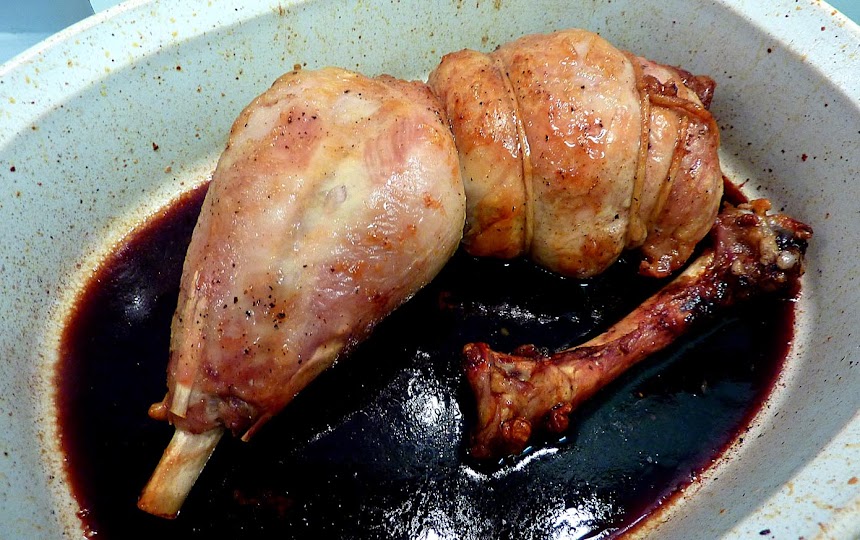 The combination of honey and soy sauce in the baking dish makes for a delicious sauce.

When the roasted cuisse de dinde comes out of the oven, remove the twine it's tied up with. Then you can easily carve the thigh meat into slices. Serve the meat with the cooking liquid. And some rice. Or stir-fried vegetables. We had stir-fried cabbage with ours.