Have you ever lived in a place with a leaky roof? It's not fun (you can ask Martine). Especially when nobody can figure out why it's leaking. That's our situation. In the 1990s, we had at least three similar experiences in San Francisco, by the way.


First you have to find a roofer — un couvreur, or "coverer." A talented, resourceful, and reliable one. Then you have to wait for dry weather. Or so says the roofer. We're on our third. The first one was very good when you could make contact with him and schedule a job, but that was not easy to do. In fact, it eventually became impossible.


He cleaned out the valley (la noue) between the main portion of the roof and the dormer over the kitchen, where there must be a problem with the metal flashing (zinc, zinguerie) under the tiles. Water doesn't flow down the valley the way it's supposed to. It backs up and comes flooding in just above the kitchen ceiling. Cleaning out the valley every spring worked for a few years.


The second roofer tried the same strategy. He didn't know what else to do. Water started leaking again. The second roofer disappeared. He never even charged us for the work he did, including a chimney-sweep. I went to his company's office in Saint-Aignan and tried to pay the bill, or get a bill from them. The woman in the office said she'd look into it and send us an invoice. She never did.


Last fall, the third roofer did a really job of fixing a problem with seepage and moisture around our Velux skylight windows in the new loft, which has started in 2010. Thanks to his ingenuity and his good work, we haven't had any leaking up there this year. He also tried to determine what was causing the leak over the kitchen and to fix it, but he told us that he couldn't guarantee anything as far as that problem went.


In fact, he said we shouldn't do anything about repairing repainting the kitchen ceiling for a year or so, because the leak might very well come back. And it certainly has. Nobody really expected it to rain so much, or to rain so hard the way it did yesterday afternoon and the way it has rained off and on for months now. Most rain in the Loire Valley is of the light, misty variety. What we've been having is hard downpours, repeatedly. Monsoon rains. 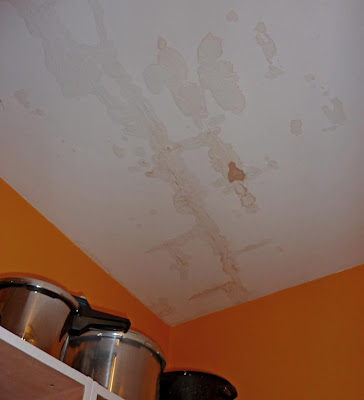 I called the third roofer again in March and he said he was very busy right then but he'd pencil us in. He never called back. I called him again last week, and to his credit he did call me back. I explained the problem one more time. He said he understood, and he has another solution he wants to try. But first it has to stop raining, he said.

Last night, as water fairly gushed into the kitchen out of a big crack in the ceiling, I went into pagesjaunes.fr, the on-line yellow pages, and found two new local roofers, ones I've never heard of before. They have e-mail addresses! So I sent e-mails to both of them (nos. 4 and 5), asking for help. (In French, of course. I don't know what you do in these situations if you can't write or speak French.) Please come inspect the problem, I begged. Try to find a solution. I'll pay you.


The good news is that we are supposed to go into a dry spell this coming week. In fact, it's not raining this morning (not yet). Maybe one of the three roofers I'm more or less in contact with will show up. At the very least somebody might put a tarp up on the roof to prevent further damage. The roof is just too high and too steep for me or even Walt to be able to get up there.
Posted by Ken Broadhurst at 08:04