One month from today, on June 29, the 100th running of the Tour de France bicycle race will start in Corsica. Toward the middle of July the race will come through the Saint-Aignan area. Old friends of ours from Illinois will be here the same weekend (July 14 — Bastille Day). 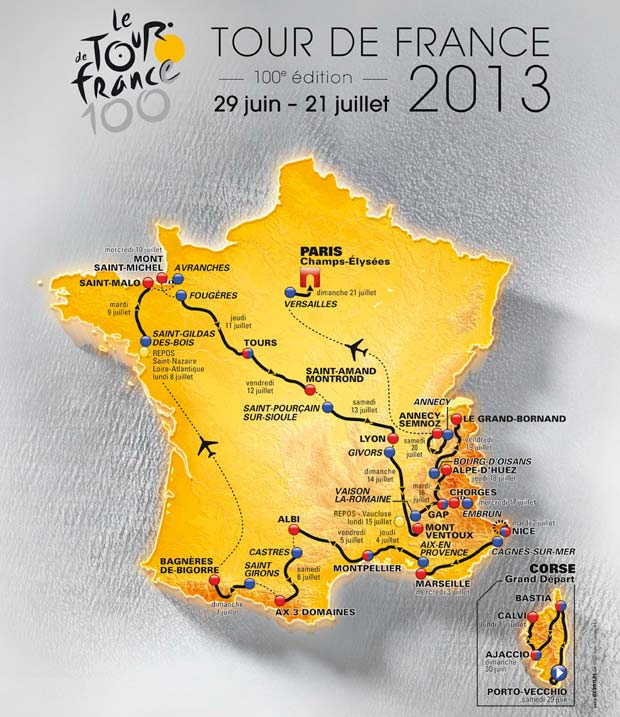 I had visions of the peleton coming through our village and then through Saint-Aignan on its way from Tours down to Saint-Amand-Montrond, south of Bourges, on Friday July 12. Our village and both towns are on the Cher River. But it is not to be.


The route, now announced, goes a little further south. The peleton will ride through Azay-sur-Indre, Genillé (both near Loches), Montrésor, and Ecueillé on its local track. Those will be the towns closest to Saint-Aignan — 12 to 15 miles south of us — on the 2013 Tour de France route.

A couple of years ago the Tour de France rode through the nearby village of Orbigny, where American friends of ours have a house. We went there and sat by the road to watch the cyclists and support vehicles ride by. To see the blog posts, with photos and video, click here.

And here's the 2013 Tour de France web site in English

Walt just clicked the link above and told me out he could not find graphic descriptions of the different tour stages there. Click this link, then, to see graphics like the one at the right, listing each stage and the towns and villages the race will run through.
Posted by Ken Broadhurst at 07:30