Wednesday afternoon, just when it was getting dark, I went down to the utility room to take some things back down there, and to put some laundry in the washing machine and set it to run overnight. The utility room in our house is a combination chaufferie, or boiler room, and buanderie, laundry room. There are big storage closets in there, as well as a shower stall, a chest freezer, and an electric water heater. The room is big — about 30 feet long and 15 feet wide, or 40 square meters.

As I pushed the door open, I heard a loud fluttering sound to my left. My first thought was that Bertie the cat was in there and had somehow made that noise. When I looked up in the corner at ceiling level, however, I saw a bird. It was a green, red-headed woodpecker — a bird we see a lot around here, and called a pic vert [peek-VEHR] or pivert [pee-VEHR] in French. I certainly never expected to see one in the house. 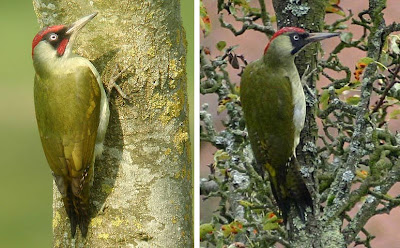 The green woodpecker is sedentary in France. We see them
year-round in our back yard and out in the vineyard.
The one on the left is a male, and on the right a female.
Photo credits: http://www.oiseaux.net/photos/alain.fosse/pic.vert.1.html
and http://fr.wikipedia.org/wiki/Pic_vert
I had my arms full of things I was taking down to the pantry — le cellier — so about all I could do was continue on my way. Walt had just gone out for the afternoon walk with Callie. I turned on the light (the switch is outside the door) and pushed the pantry door open. As soon as I was inside and setting things down, the woodpecker flew in there with me. The pantry is a small, unheated, windowless room with a dirt floor.

Having the woodpecker in there with me was a little unnerving. A pic vert is a fairly big bird — 12 or 13 inches (31 or 33 cm) long, with a 16-inch (40 to 42 cm) wingspan. It also has a very long, pointed beak. It was flapping wildly up where the walls meet the ceiling, and the ceiling is not very high downstairs. The poor bird was in a panic. 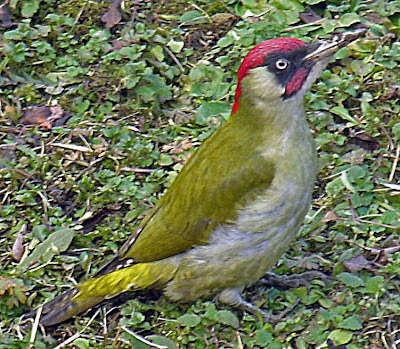 The pivert — this is a male; you can tell by his red "mustache" —
often feeds on the ground, eating ants and other insects.
Photo credit: http://www.vertdeterre.com/nature/animal/oiseau-pic+vert.htm
I went back to the other end of the utility room and opened the back door wide. In a corner, I found a broom. I took the broom back to the pantry and gently tried to shoo the woodpecker out. It worked, but the bird couldn't seem to find the back door, and soon he had flown from one end of the big utility room to the other and then back again, into the pantry. I started over again.

I kept thinking: what if he turns on me? He could hurt me with that beak and those claws he uses to grip onto the bark of trees. But I needed to get him out of the house. The second time he flew, with the broom nudging him, out of the pantry and across the utility room, he found the open door and he was gone into the semi-darkness. 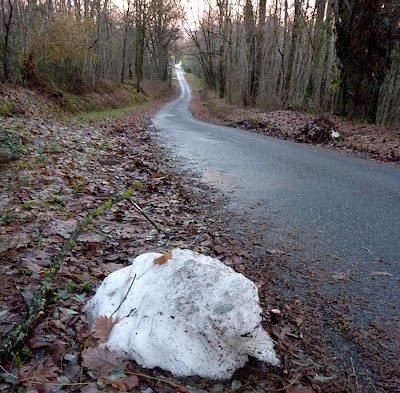 The last lumps of last week's snow, on the side of
the road that comes up the hill to our hamlet
Whew. Success. When Walt got home with Callie, I told him about it. He said I was making stuff up. But I wasn't. We've had little European robins (rouges-gorges), titmice (mésanges), and even bats (chauves-souris) in the house before, but never in the utility room. And never anything as impressive as a woodpecker. I wonder how he came in. Through the garage, maybe, using the window we leave open for Bertie to come in and go out during the day. Or could the woodpecker have slipped in when Walt opened the back door to go out with Callie?