Turkey... oh no, not turkey again!

I think the turkey we cooked yesterday was only the second we've cooked — roasted — since we moved to France in the summer of 2003. We always have lamb at Thanksgiving, first of all. And in other years, for Christmas dinner we've cooked either a capon, a poularde, a pintade (guinea fowl), a duck, or a goose. (A poularde is a young hen chicken especially fattened for eating before it has ever ever laid an egg.)

Okay, I know you have probably eaten turkey more often than that, and you probably ate more turkey than you meant too yesterday. And now you have to eat leftovers for a few days. A lot of people say the leftovers are a lot better than the turkey you eat on Christmas Day itself, so buck up. I'm going to go ahead and post about turkey, despite it all. 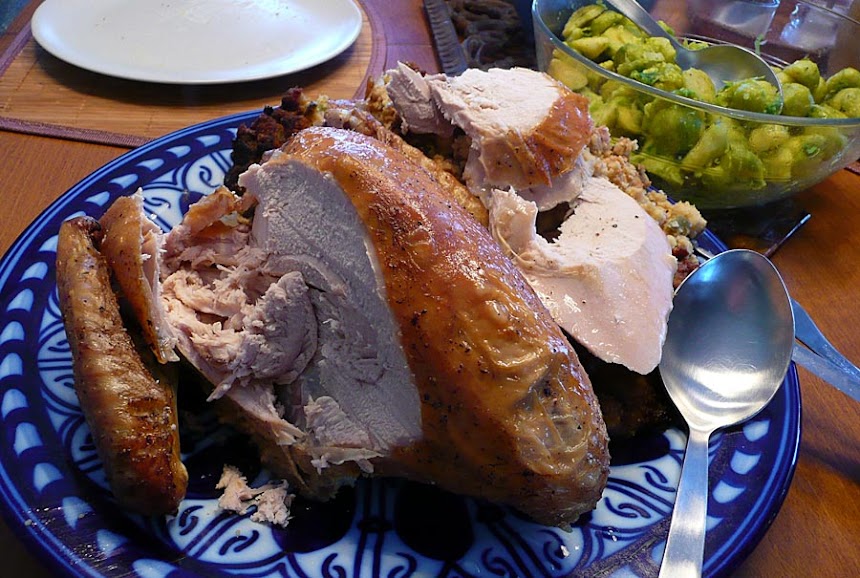 A roasted turkey breast and some sprouts for Christmas 2010
The two turkeys we've roasted and eaten in France have been birds we ordered from the butcher's, in 2003, and from the poultry vendor at the market, this year. They do have turkeys at the supermarket — I saw some at Intermarché when we were over there last week. But the nice-looking ones (dinde fermière — farm-raised) were more expensive than the one we got at the market, and the less expensive ones were not very appetizing (I'm sure they are battery-raised beasts). 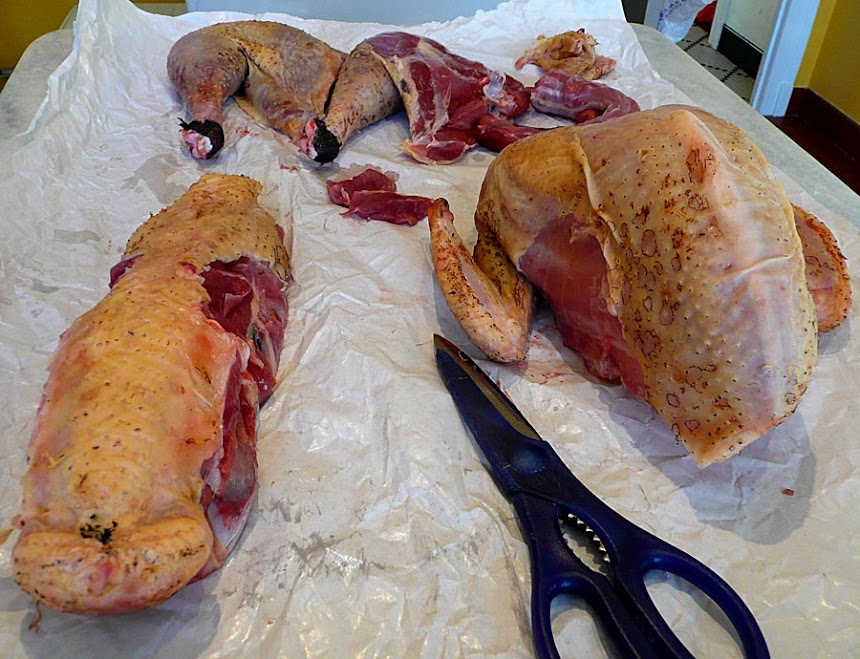 The turkey cut up for different cooking methods
We were able to get a 3.5-kilogram turkey at the market. That's probably impossibly small by U.S. turkey standards — less than 8 lb. Still, that's a lot more bird than I want to cook at one time for the two of us. Leftovers are good, but not that good. So what we do is cut the legs and thighs off the bird and cook them separately. The back and neck go into a pot of water to boil so that we have stock for making gravy and stuffing. Then we pick the meat off those pieces to feed to the cat and dog. 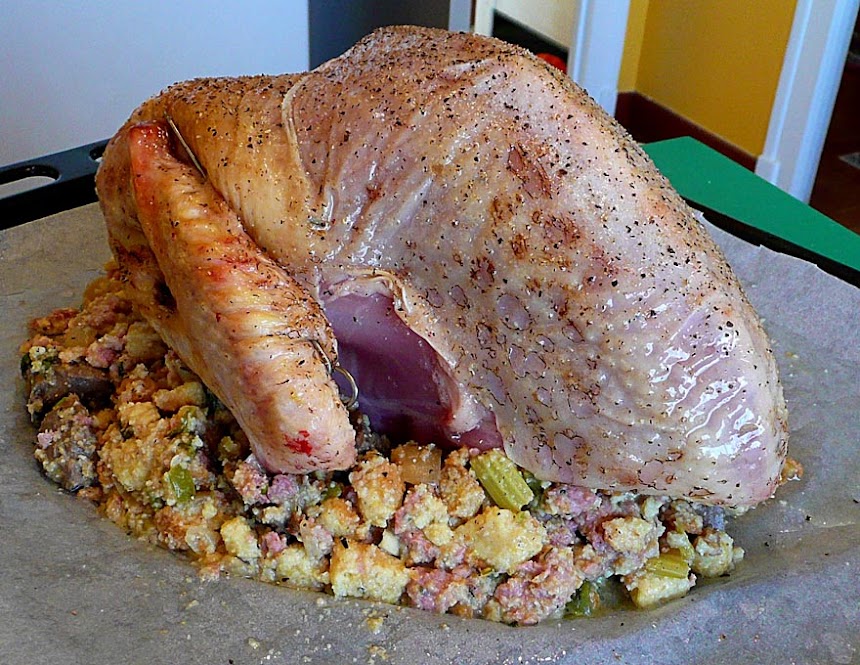 Ready for the oven, with the wings pinned to the breast
What we roast for our dinner is the breast, including the wings. We set it on a pile of stuffing — rice, wheat bread, or cornbread with onions, garlic, sausage meat, giblets, and other ingredients — and roast it that way. The cooking juices from the breast seep down into the stuffing. Give the Franco-American chef Jacques Pépin credit for this idea. 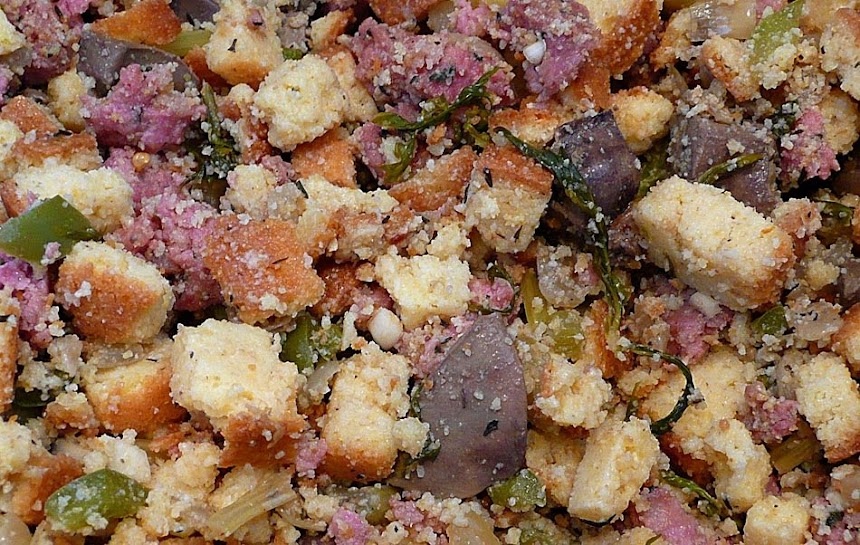 Cornbread stuffing with chicken livers, sausage meat,
celery, onions, green pepper, garlic, and thyme
Yesterday, by the way, I got the turkey breast all ready and put it into the oven when I remembered that I had neglected to cut out the wishbone to make carving easier. But when it was done, I found that the poultry vendor had already removed it, as part of what he does to prepare the bird for the oven. That was nice. 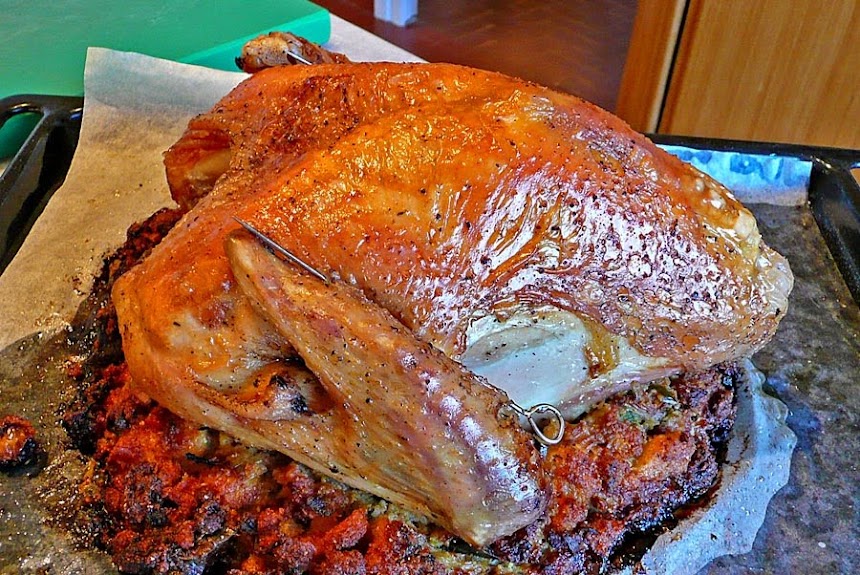 The turkey breast as it comes out of the oven
With the legs, thighs, and some of the turkey giblets (the heart and the gizzard) I'm making confit de dinde this morning. That's the turkey parts cooked very slowly for several hours in enough duck fat to cover them. The meat will get tender and succulent and will be good with beans or green vegetables with some good sausages.
Posted by Ken Broadhurst at 08:51