Frigid France, then and now

We are living through the coldest December in France in the past 40 years, they are saying on the morning news show. We've had beautiful sunshine for two days now, but the price has been temperatures below freezing. I mean in the daytime. Early in the morning, it's like an icebox outside.

Forty years! The first time I came to France was 41 years ago. We landed in Paris on about December 30, 1969. I don't remember what the weather was like, but I do remember the atmosphere and the food. Already the food. I was 20 years old, and I had been learning French for seven years in North Carolina. (Don't laugh — I was lucky to have had excellent teachers, including several at college who were nationally and internationally respected.) 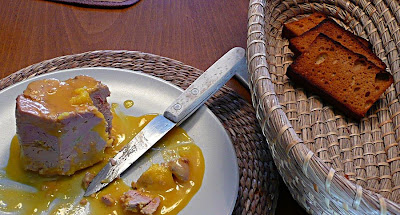 Foie gras et tranches de pain d'épices grillées à Noël
Anyway, I spent a semester in Aix-en-Provence during the first half of 1970. I do remember the weather there. It was much colder than I had thought it would be. I was coming from a very mild climate. The winds, that famous Mistral, roared and roared. The place where I lived — I rented a room from a family — was a long uphill walk from central Aix, where my classes were held, and I remember a few times having to trudge up the hill soaking wet because it was raining so hard.

I also remember that it snowed. It might have been in February or March. That really surprised me. A cold wind howled. The mild, sunny South of France. Ha! 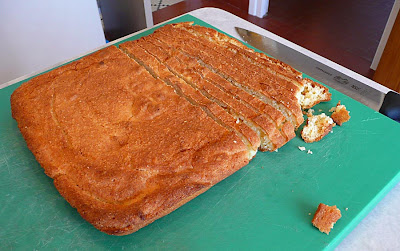 Cutting cornpone into cubes to make stuffing for the turkey
At spring break, I went to spend two weeks in Paris. Other students headed for Spain, Greece, or Scandinavia. I just wanted to be in Paris. I stayed at a hotel at the place Maubert in the Latin Quarter — a hotel that went out of business several decades ago. It was definitely not what they call, in France, un palace.

And it snowed. I distinctly remember going to Versailles one day and walking around in the park at the château for hours in the snow. It was beautiful, of course, but my feet were wet and cold. 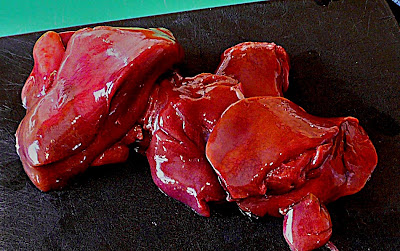 Foies de volaille — chicken or turkey livers — for the stuffing too
Back then, you could have what I considered an amazing meal in a restaurant in the Latin Quarter — nothing fancy by French standards, of course — for a dollar or two (5 to 10 francs). That was good for me, because I hardly ever had more than a dollar or two to my name. (I wonder how much that room at the Hôtel Pierwige cost?)

Yesterday, Walt read an article about the big wholesale food market in Rungis, south of Paris. The writer kind of got things mixed up and said that the Rungis market has existed for nearly a thousand years. The article said the Rungis market used to be located in central Paris in a district called Les Halles.

Oh well. The truth is that the market at Les Halles ("The Market Halls") existed from at least 1180 until about 1970. Then, because the narrow streets of central Paris were becoming too congested with trucks and cars, and because developers and politicians wanted to clean the area up and build something more profitable there, the whole market was transferred out to the suburbs. 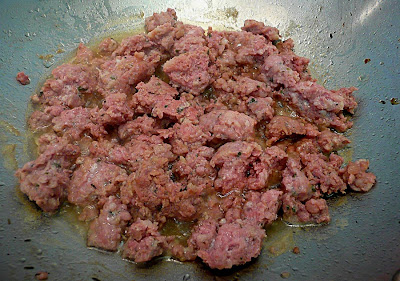 Cooking chair à saucisses — sausage meat — for the stuffing too
Anyway, I remember going to Les Halles in 1970. I remember taking the metro over there and coming up out of the underground station to an amazing scene of confusion and hubbub. It was dark — it might have been snowing that day too. The memory is dark too. Demolition of the market pavillions had started in late 1969, but the market was still going.

It was too much for a 20-year-old from North Carolina. I couldn't make heads or tails of the place, and it was, frankly, kind of scary. Too real, and somehow threatening. I didn't stay long. I got back on the metro and went back to the Latin Quarter, with all of the other 20-year-olds. I'm sorry now that I didn't explore more.

I lived at Les Halles for three years at the end of the '70s and '80s. By then, it was a gigantic construction zone. It wasn't scary — at least not most of the time. The rue Montorgueil, today a kind of hip street full of cafés and restaurants and fancy food shops, had kept the atmosphere of the old Les Halles market to a great extent. It hadn't yet been pedestrianized and prettied up. Mornings, year-round, rain or shine or cold or hot, little old ladies wheeled wooden carts with wagon wheels out of the old courtyards and warehouses and sold vegetables, fruits, and other products to shoppers. It was something out of Victor Hugo, Flaubert, or Maupassant.

I was lucky to be able to get to know it, to buy food there in the shops and market stalls, and to learn a lot about cooking from merchants and French home cooks that I knew back then. One home cook was a woman who was in her late 70s then, the grandmother of a friend. She cooked lunch for us every Sunday for three years, teaching me what the traditional French dishes and meals were like. Another was the charcutière in a shop on the rue Montorgueil, who would patiently and thoroughly explain to me how to cook the products I bought from her. 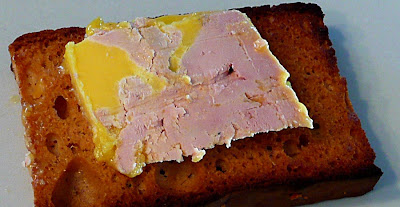 A slice of that foie gras on a slice of the pain d'épices
(a kind of gingerbread but not too sweet)
The coldest winter I remember in Paris was 1978-79. The pipes froze in the little apartment I lived in just a few steps off the rue Montorgueil. I was on the top floor, so there wasn't much to keep the heat in. And the only heat in the place was a little electric radiator on wheels that you could roll around from room to room. There were only two rooms (350 sq. ft.) so it wasn't hard to move the radiator and keep it close by. The streets outside were icy and slippery. It was not something we were used to — the winters from 1970 to 1978 had been very mild in Paris and in Normandy.

Cold weather, good food. The dark days of December, the warmth and color of a little French kitchen. Time spent at the table, eating and talking. That's France for me.
Posted by Ken Broadhurst at 07:16