After posting yesterday on the topic of fouées de Touraine, the local flatbread, I went on Google and searched for recipes for pita bread. Result: it seems to me that they are the same thing, at least as far as the present-day incarnation of the fouée seems to go. The recipes for the two breads that I found were essentially the same. 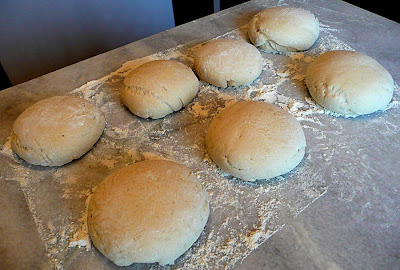 Fouées ready to be flattened and go into the oven...
Ours were good (credit to Walt). All I did was find and print out the recipes I found on line. Oh, and then watch and take some pictures while he was making them. By the way, here's a link to a pita bread recipe that is pretty much the same as the fouée de Touraine recipe we used. As far as I know, they don't sell packaged pita bread in the Saint-Aignan area supermarkets. 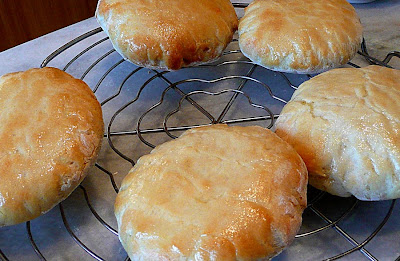 ...and freshly out, brushed with olive oil
To go with the fouées, I cooked some « pois du Cap », which would mean "Capetown peas" or, in my brand of English, big Lima beans. We also had a purée of chick peas and potatoes (leftovers), a couple of thin slices of ham panned in butter, and a good green salad. 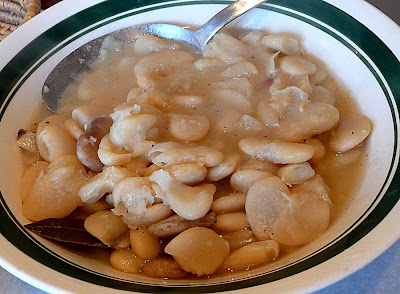 Pois du Cap — Capetown peas or what I call big Lima beans
It was a good lunch for a winter day. Winter, by the way, is arriving much warmer than late autumn has been here in Saint-Aignan. Our high temperature today was at least 25 degrees F (13 degrees C) higher than it was just two or three days ago. 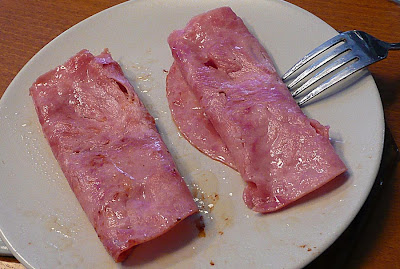 Ham (jambon de Paris)
In other words, we are having a nice thaw. This while Paris, Normandy, and Picardy are suffering under a heavy snowfall. England too. The airports in Paris, London, and Brussels are chaotic, with many canceled flights and many would-be fliers sleeping on chairs and floors in airport waiting areas. I'm glad I don't have to go anywhere this week.

Today is Walt's birthday. Wish him a Happy.
Posted by Ken Broadhurst at 07:18