Raining again this morning, but at least it's not snow. We're hoping the rain won't become snow tomorrow either, because that's our big market day. We have to drive over to Montrichard (10 miles west) to pick up the turkey and buy some sprouts or other green vegetable.

A few days ago I saw a TV chef (Eric Léautey on French CuisineTV) making some pasta sauces. The one that attracted me, both because it seems unusual and it reminds me of a recipe I used to make in Paris back in the 1970s, was a sauce tomate au thon to be served with pasta. It's a great dish for a gray winter day. 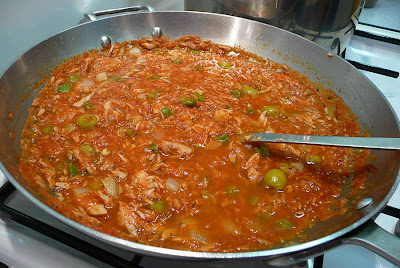 I get really hungry just looking at this photo.
It even looks kind of Christmas-y.
Years ago, I had a recipe out a long-gone book (where did that book go, anyway, and which one was it?) that was called Tuna Provençal. Or Provençale. In the book it was in English, I'm sure. It used canned tuna, tomatoes, onions, garlic, olive oil, and herbs like thyme and rosemary. I think I remember it being served with rice.

That's exactly the sauce Eric Léautey made on his show the other day. I didn't get his recipe and haven't yet found it on the www.cuisine.tv web site. I found similar recipes on other web sites, however, and they are all very similar to each other. 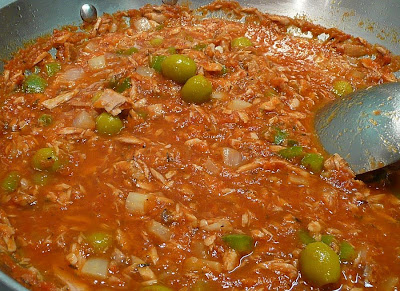 The olives are optional, really, but so good if you like them.
One advantage of a recipe like this is that it is so fast to prepare. It's ready in 10 or 15 minutes, about the amount of time it takes to cook the pasta. Here's the recipe:

Sauté the onion and green pepper together in olive oil. Add the tomato purée or sauce (and adjust the quantity). Stir in the parsley, salt, black pepper, and cayenne pepper. Add the tuna (about 200 grams or 6 oz.) and finally the olives. As soon as it's heated through and starting to simmer, it's ready.

If you use tuna packed in olive oil, use that olive oil to make the sauce. If you use tuna packed in water, put some of the tuna water into the sauce (but taste it for saltiness first). The better the tuna, the better the sauce, of course. Same goes for the tomato sauce or puree. Of course canned tomatoes could be very good, and fresh tomatoes, in season, even better. La sauce tomate au thon is more an idea than a recipe, really.
Posted by Ken Broadhurst at 09:09