The snowstorm that came up from the south yesterday pretty much missed Saint-Aignan and this part of the Loire Valley. We had some flurries overnight, and a flurry or two yesterday morning, but very little new accumulation. High today: –2ºC, about 28ºF.

Today a storm is moving in from the northwest and is supposed to drop snow over about two-thirds of France during the day. It sounds like it will be light snow, however. The Paris area will get a few inches, and that's always a problem up there because there's so much traffic around and in the city. 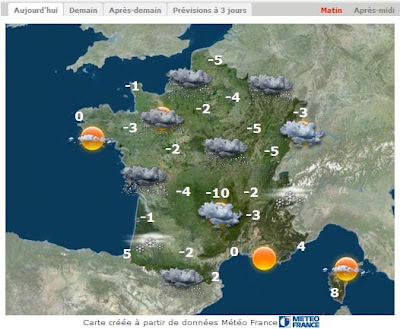 The French weather forecast for Thursday 02 December 2010.
We're under that –2 below the cloud with the sun hidden behind it.
And I have to go out. Just to Saint-Aignan, which is three miles down the road. I hope the hill isn't too slick. We saw a few cars on our little road yesterday, so some people were out driving around. I talked to a neighbor who grew up at La Renaudière and he told me he had never seen snowy weather like this so early in the season. He said he has vivid memories of a period of such weather around Easter one year when he was growing up. I thanked him for pointing out that the snow might last well into the spring!

A friend from Blois called last night just to say hello and see how we were doing. She said the school buses around Blois haven't been running this week, so all the kids are staying at home. Teachers are posting lessons for them over the Internet to keep them busy and productive. That's the 21st century, I guess.

Fact is, weather forecasts are saying that by Sunday we'll have high temperatures in the range of +6 to +8 ºC. That will feel like a heat wave. And with the milder temperatures (mid-40s) will come rain. That will wash the snow away. Then life will get back to normal.
Posted by Ken Broadhurst at 07:25