Oysters to finish the year

We just came back from the market in Saint-Aignan, where we went to buy some oysters for our New Year's Eve dinner. Oysters and then a big escarole (scarole in French) salad with some lardons (chunks of smoked bacon), croûtons (cut from a baguette), and garlicky vinaigrette dressing will be our food for the day — plus some rice pudding that I made day before yesterday. 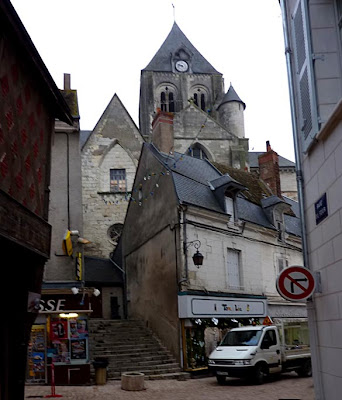 The church in Saint-Aignan on New Year's Eve 2010
Yesterday I bought some Muscadet wine to go with the oysters. It's a very dry white wine from the area down at the mouth of the Loire River, and it's the quintessential shellfish wine. It's not expensive either — about 3 € a bottle. With the oysters and Muscadet, we eat slices of rye bread spread with butter. 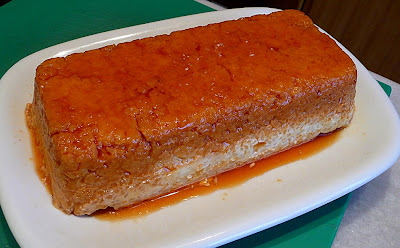 Rice pudding with a caramel sauce —
Gâteau de riz au caramel
And with the oysters, we like to have what is called a mignonnette sauce — that's a shallot diced up into a little wine vinegar, with lots of black pepper. A few drops of the vinegar-shallot sauce on each oyster does the trick. 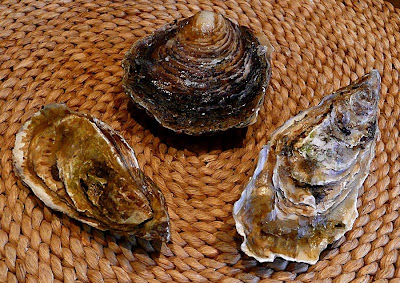 Three kinds of oysters: "flat" at the top; "open sea" on
the right; and salt-pond fattened on the left.
We got three kinds of oysters: 18 Fines de Claires, which are oysters that are fattened up in salt ponds along the coast for a couple of months before they are taken to market; 12 "flat" oysters, which are the original French species, now not so plentiful as they used to be; and 3 pleine mer ("open sea" or wild, I guess) oysters, which the market vendor gave us as a bonus — they're a present for the person assigned the task of opening the the other oysters, she said.

I'll have more to say about the oysters after we've tasted them. I'm not sure we've ever bought the flat oysters before. 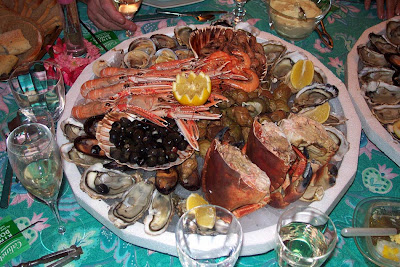 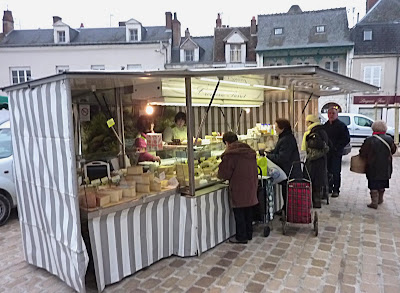 The cheese stand at the market in Saint-Aignan
The market was small and not crowded. Only the essential merchants were there. One sells all kinds of seafood and fish. Another had oysters only. Two or three were selling produce. One had nice breads and brioches. And finally, the regular cheese vendor was there, with a great selection of cheeses from all over France.
Posted by Ken Broadhurst at 10:28