Mustard, and the market

Busy this morning and posting late. I'm making bœuf bourguignon. I bought the beef a few days ago and bourguignon has been on the schedule for a while. I think everybody knows that that's beef stewed in red wine with onions, carrots, smoked-pork lardons, and mushrooms.

Notice we don't talk much about the weather much any more. That's because it's back to normal. Yesterday morning it was very cold but we were able to enjoy going to the open-air market in Saint-Aignan. One reason for going was to order a "bird" — une volaille, a fowl — for our Christmas dinner. 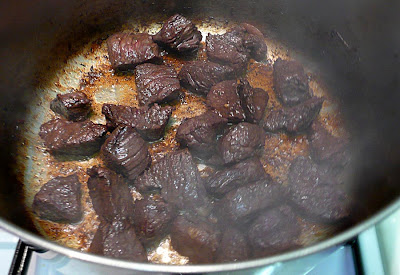 Browning chunks of beef for a bourguignon
As far as I know, there will be just the two of us for Christmas. We both wanted to roast a turkey, but that's a lot of meat for just two people. Anyway, we went to see the poultry vendor — le volailler — that we like at the market. We figured if we couldn't order a small turkey, or it was just too expensive, we'd place an order for a nice guinea hen, une pintade.

Chez le volailler, the woman in charge knows us. We told her we wanted a turkey and she said the smallest dinde she'd be able to get us would weigh 3.5 kilos. Walt and I looked at each other and said, « Pourquoi pas ? » A bird like that would be in the 8 to 9 lb. category.

Besides, we have a plan. We will probably roast the turkey breast and save the leg-thigh sections for another dish. Maybe confit de dinde, where you cook the turkey pieces slowly in melted duck fat until they are very tender. They take on some of the flavor of duck in the process.

We'll pick up the turkey at the Friday morning market in Montrichard on December 24. That'll be fairly convenient. And we'll cook it during the day on the 25th. 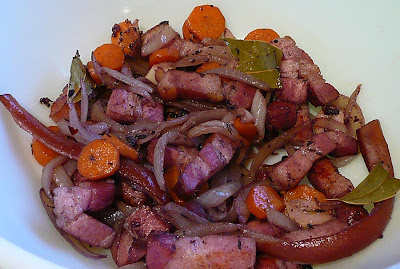 The flavor base for the bouguignon — sautéed onions, lardons,
and carrots, with thyme and bay leaves
Oh, about the market — I was pleasantly surprised to see what a good mood everybody was in. Customers joked and laughed with each other as they stood in fairly long lines, waiting to buy fromage, charcuterie, or légumes. And then they chatted and laughed with the vendors too. I think the beautiful food in a French market puts people in a good mood.

Evelyn asked about ways to use the very hot Dijon mustard she got from a French friend of ours who visited her recently. It's true that the French mustard is much much hotter than about any mustard you can find in America. I love it. But I also remember times when we lived in California and we'd fly to Paris and eat French mustard at one of our first lunches or dinners. It was always a surprise.

You'd take some out of the little mustard pot on a café or restaurant table and slather it on a piece of steak or a French-fried potato. You'd put it in your mouth and you'd feel like the top of your head was going to blow off. The hot mustard "goes right up your nose" as they say in France, and it really clears out your sinuses.

One thing about hot Dijon mustard though is that it's only really hot when it's very fresh. If you leave the jar in a kitchen cabinet for a week or two, the flavor will end up toned down and the color of the mustard will go from bright yellow to mustardy brown. It will still be good to eat and cook with, but it won't make your head feel like an erupting volcano.

I think that's why you can't get really hot Dijon mustard in the U.S. The American companies make it for American tastes. But even the imported stuff has lost a lot of its heat by the time it finally gets across the Atlantic — and across the continent to California, for example. 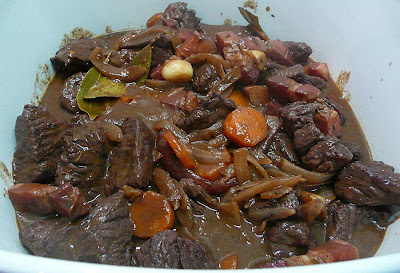 Bœuf bourguignon ready to go into a slow oven
for a three-hour cooking
Ways to use Dijon mustard in cooking? Well, in vinaigrette is the first thing that comes to mind. But not everybody likes to eat vinaigrette on salads every day. In France, one of the most common dishes containing mustard is lapin à la moutarde. You don't have to do it with rabbit, however; you can use chicken. Rub mustard on skinless chicken pieces and sprinkle on some bread crumbs. Bake them in the oven. Cooked mustard loses most of its fiery pungency, but still has a nice flavor.

Pork chops fried and then served in a cream sauce that has a tablespoon of Dijon mustard are very good too. I've blogged about that before. You could do the same with steaks or chicken. Those are the first ideas that come to mind.

I'd better go check on the bœuf bourguignon, which is bubbling away in the oven. I still have to trim, wash, and slice the mushrooms that go in toward the end of the cooking. It should all be ready about 1:00 for lunch.
Posted by Ken Broadhurst at 10:16