Five years ago when my mother sold her house, I learned that she had kept all the letters I wrote to her over the years, starting in 1970. We used to write a lot. All of us, I mean. MA also had packets of letters I had received from friends I went to college and spent time in France with. The letters were in boxes in the attic and garage, and I didn't know it. Or had forgotten.

I found one this morning that describes my trip to Paris on Saturday, March 21, 1970. I took the train from Marseille to Paris with an American from Nantucket who was friends with a fellow student of mine in Aix. We left Marseille at 10 p.m. and spent the night on a train, in a compartment with three French guys, two Englishwomen, and an Englishman. With us, that made eight in the compartment, so it was crowded. 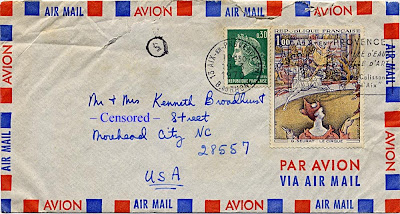 Letters to the parental units from 1970
Two of the French guys — brothers about my age — were traveling with what I described as "a cute little kitten," and sometime during the night the kitten peed all over my pants leg. I was really fresh, as you can imagine, when we arrived in Paris at 7 a.m. that Sunday morning. I had turned 21 years old just a few weeks earlier.

Recently, remembering back, one of the things I've been wondering about that two-week trip to Paris so long ago is how I afforded it. Well, the answer is in the letter. We arrived in Paris early in the morning and all the passengers from our train compartment went off in different directions, including the American from Nantucket. He was going to Amsterdam. I headed for the Latin Quarter. I wrote this in my letter to my parents:

Found a hotel within an hour, for 15 F a day (including breakfast) [Fifteen French francs were worth less than $3.00 U.S. at that time.] Small single room, creaky floor, very clean. Shower costs 2.50 F extra. Slept until 1:30 p.m., took métro to Place de la Concorde and strolled up the champs-Elysées to the Arche [sic] de Triomphe. Went to a movie after dinner and then to hotel and bed.

So that's how I afforded it. Less than $3.00 a night for room and breakfast, and there were plenty of Paris restaurants where I could have a full meal for 5 FF — less than a dollar.

I found this sticker in with my old letters.
"I lost my heart to Paris," it says (more or less).
Before going, I had written in a letter that all the other American students I knew were "spreading out all over Europe, from Greece to Scotland," for the two week spring holiday. Not me:

I figure I'll buy a round trip ticket to Paris for $40 and stay there until I get tired of it. Then if I run out of money I'll be guaranteed passage back to Aix when I do.... I figure I'll have $10 a day, even after train fare, and that should be plenty. Europe on $5 a Day lists hundreds of hotels in Paris where single rooms cost $2 – $3 a day, so that should be no problem.

One more paragraph from a letter I wrote a few days after my 21st birthday:

Sunday we took a bus excursion to Nîmes. Six of us Americans and about 20 old (over 60) French people. Kathy, a girl from Duke, got sick and threw up, so the bus driver had to clean up. Plus, every time we stopped they had to wait for us to get back on the bus. Old people get tired and don't want to stop and see as much. The bus driver got lost twice and had to ask directions from old men working in the fields alongside the roads.

My parents were in their early 40s at that time, so I could talk to them about "old people" without risking any offense or hurt feelings! I'll be 62 in a few months, and I can attest that my observations as a 21-year-old were spot on.

Most of my letters from back then include at least one
paragraph like this one. I was an accomplished beggar!
I still looking at letters to see if I wrote anything about going to Les Halles in Paris during that trip.
Posted by Ken Broadhurst at 10:44