For the past 10 or 12 years, Walt and I have been making a nice hot cheese fondue every year on Christmas Eve. Usually it's a fondue of "Swiss" or Alpine cheeses, including Comté, Gruyère, and Emmenthal. The other ingredients are white wine, nutmeg, black pepper, and kirsch (cherry brandy). A little cornstarch binds it all together so that the melted cheese doesn't separate into curds and liquid.

Today's cheese fondue will be an Auvergne variation on the Savoie/Switzerland theme. The Auvergne is a mountainous region in the center of France, south of Saint-Aignan and west of the Alps. The mountains there aren't nearly as high as the Alps, but a lot of them are very ancient extinct volcanoes. The winters in the Auvergne are cold and snowy — as is winter all over France this year. In September 2009, we spent a few days with friends in the part of the Auvergne called the Cantal and enjoyed the scenery, the people, and the cheese. 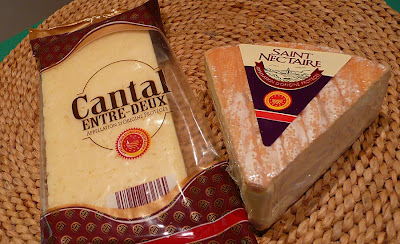 Two cheeses from the Auvergne region of France

Our 2010 fondue will be made with two Auvergne cheeses called Cantal and Saint-Nectaire. Cantal is a cheddar-like cheese that melts very smoothly and is slightly nutty-tasting. The Larousse book Les Fromages describes Cantal as demi-dur — semi-hard — it's an "uncooked" cheese. It can be made with pasteurized or raw (unpasteurized) milk. I did a series of posts on our visit to a dairy farm in the Cantal last year. 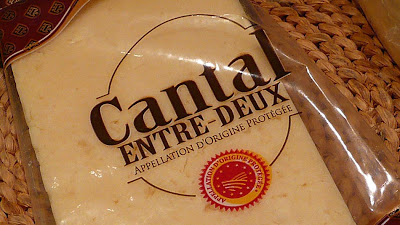 Saint-Nectaire is an smoother, creamier cheese than Cantal. The Larousse Fromages book classifies it as demi-ferme — semi-firm — and it's also uncooked. (Swiss-style cheeses are "cooked" — the milk is heated during the cheese-making process.) Saint-Nectaire is made in a village of that name in the center of the Auvergne and the surrounding countryside. Its flavor is described as "delicate, with hints of hazelnut." Some Saint-Nectaires are made with raw milk, and others with pasteurized milk. 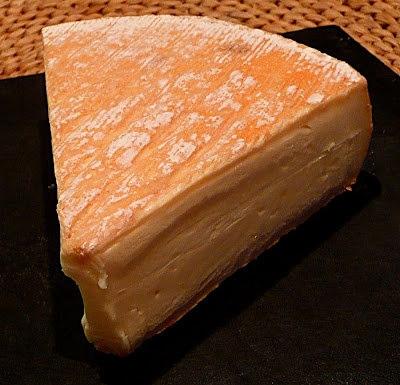 A wedge of Saint-Nectaire cheese

The main difference, technically, between Cantal and Saint-Nectaire is that the Cantal milk curds are cut and pressed twice during the cheese-making process, and the Saint-Nectaire curds just once. Otherwise, the two are made with the same milk in the same region, Cantal being just south of the Saint-Nectaire production area. 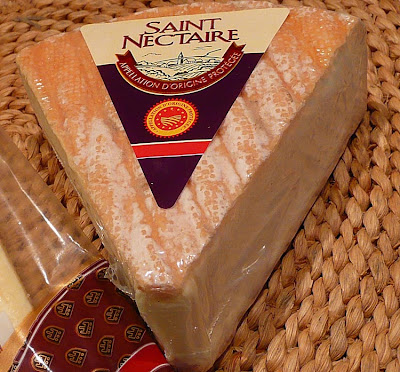 According to the Larousse cheese book, Cantal may well be the oldest existing French cheese, dating back 2000 years and mentioned in Roman texts. Saint-Nectaire cheese-making dates back about 1000 years, and it became well-known across France when it was presented at King Louis XIV's table in the 17th century. 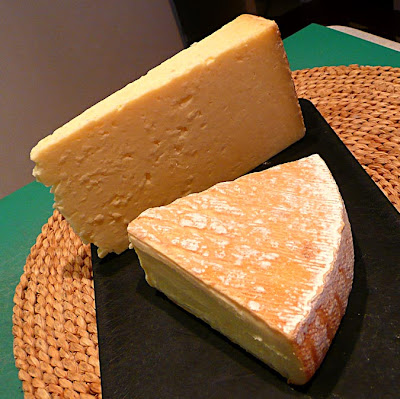 Cantal and Saint-Nectaire are both AOC (or AOP) cheeses.

Both cheeses have the Appellation d'Origine Contôlée (or Protégée) label, or AOC/AOP. That means that to be called either Cantal or Saint-Nectaire, a cheese must be made according to strict standards that specify where the milk comes from (where the cows graze, and what on) and how the cheese-making process is carried out. You should be able to find them in America and other countries outside France. They should look and smell fresh when you buy them.

Here's a recipe for an Auvergne-style cheese fondue. The general rule for fondue is that you want between a third and a half pound of (whatever) cheese per person. This recipe is for four:


500 g of Cantal cheese (a generous pound)
300 g of Saint-Nectaire cheese (a generous half-pound)
1 or 2 cloves of garlic
1 baguette of good French bread
50 cl of dry white wine (2 cups or 16 fl. oz.)
a pinch of nutmeg
1 tsp. of cornstarch
2 or 3 tablespoons of kirsch (clear cherry brandy)
a pinch or more of black pepper, to taste

Peel the garlic clove(s) and cut them in half. Rub them around in the fondue pot to give the fondue a hint of their flavor. (If you want, you can press the cloves and add them directly to the fondue.)

Cut the rinds off the the cheeses. Cut all the cheese into thin strips, or grate it. Also cut the French bread into small cubes so that each piece has some crust on it (it will be easier to keep on the forks that way). Mix the cornstarch into the kirsch (cold) in a small bowl or glass to make a slurry.

Pour the wine into the fondue pot and start heating it up on a burner on the strove. Gradually add the cheese. Season with pepper and nutmeg. Keep the heat low and stir the cheese mixture constantly with a wooden spoon. As soon as it starts to reach the boiling point, give the cornstarch slurry a stir and pour it in. Continue stirring and cooking the fondue for three or four more minutes.

The fondue should be smooth and fairly liquid. If it seems too thin, add a little more cornstarch dissolved in kirsch or white wine. If it's very thick, heat up a little more white wine and gradually mix it in.

Set the fondue pot on the table on a heat source and give each person some bread cubes and a fondue fork to spear them with. Dip each bread cube into the melted cheese and enjoy. Follow up the fondue with a big green salad dressed in tart vinaigrette.


We are off to the market in Montrichard, 10 miles downriver from our village, to pick up our Christmas turkey. It's not snowing (yet) but the roads are supposedly icy, so we'll see how it goes. At least I have new tires! Merry Christmas Eve to all.
Posted by Ken Broadhurst at 07:23