Some days I feel like I've gone into hibernation. The sun comes up late (8:35 right now) and goes down early (just before 5:00). The days are often gray and dim. By the way, it's supposed to start snowing again tomorrow. I don't think we'll get the 40 to 50 cm they just got in places like Minnesota and Wisconsin, however.

But then we not in the far north. Still, several buildings had their roofs cave in up on the Cotentin Peninsula of Normandy during the last snow episode. Some were farm buildings, but at least one collapse caused damage at a shopping center. The weight of the snow was just too much, with some places getting 70 cm (over 2 feet).

The Renaudière vineyard, outside
Saint-Aignan- sur-Cher, on a December morning

Anyway, hibernation. I find myself going to bed earlier and earlier, and getting up later and later. Often by 10 I'm asleep. And I'm still covered up and warm at 7:30 or even 8:00 in the morning. And I've always been an early bird. Is it the cold? The darkness? My age? All of the above? It's just the season, I guess.

Last week a major four-lane highway on the southwest side of Paris was a scene of chaos for drivers. The road goes through a hilly area and is also fairly curvy. And it was iced over after 4 or 5 inches of snow fell. Several hundreds or even thousands of people — it's always hard to get a firm number in such situations — of people were stuck in their cars for many hours, with no way to get off the road. 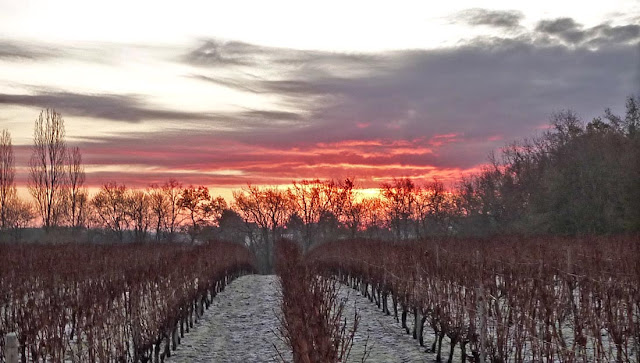 December sunrise (1) over the Renaudière vineyard

The government was blamed for not calling out the snowplows and road-salting equipment early enough. With trucks and cars blocking all lanes for miles, getting such equipment in became impossible. People interviewed on TV said they had been sitting in their vehicles for 6, 8, even 10 hours without making any significant forward progress.

They started abandoning their cars and walking to exits, looking for some hot coffee or food and maybe a warm place to spend the night. Different towns along the road set up emergency shelters for them in gyms and other public buildings. Shopkeepers let people sleep in their heated storerooms. 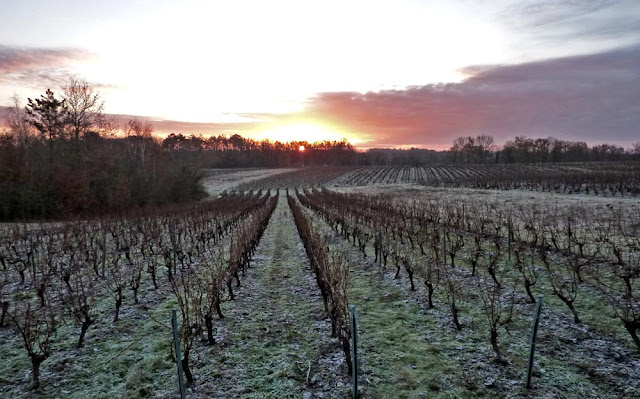 The prime minister, François Fillon, was asked why the government hadn't sent out crews to plow and salt the roads. He promptly blamed MétéoFrance for failing to predict the intensity of the coming storm. That caused an uproar, with the TV news broadcasts re-screening the predictions that had preceded the storm to show that the weather service wasn't at fault. It was all a big exercise in passing the buck, as we say.

So hibernation isn't so bad, on second thought. It's better than being out on the highways in bad weather, as so many people are. We'll see how much snow and how much chaos this week's weather brings.
Posted by Ken Broadhurst at 09:06