I bought a piece of Gruyère cheese the other day. Usually I buy Comté, a French AOC cheese that is similar to the Swiss Gruyère. Both would be in the category that we in America label as "Swiss" cheeses but which are not made in Switzerland at all.

Both AOC Comté and AOC Gruyère are made with lait cru de vache — raw (unpasteurized) cow's milk. Similar cheeses from the Alps, with slightly different flavors, are Beaufort, Abondance, and Emmental.

The other thing that SuperU was running a special on was Belgian endive — in French, that's endives, in the plural. This is their season, and they are really good au gratin — in a cheese sauce with melted cheese over the top. 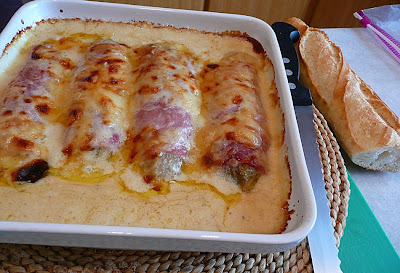 Even if Belgian endive is expensive where you live, this dish is worth the cost. That's especially true on a cold snowy day, when your body needs comforting and your senses need stimulating. Endive has a slightly bitter taste and is good braised in butter with white wine and/or lemon juice to add some sweetness. A few cloves of garlic in the braising liquid don't hurt either. The endives need to cook on low for 60 to 90 minutes, until they're tender.

That gives you plenty of time to grate some cheese. Wait until the endives are nearly cooked so that you can use the endive braising liquid to make the sauce, along with milk and cream. Be sure to add a pinch or a grate of nutmeg to it along with the grated Swiss or cheddar cheese. As I said, I had Gruyère cheese, and Walt and I decided it really does taste different from Comté, though both are excellent. 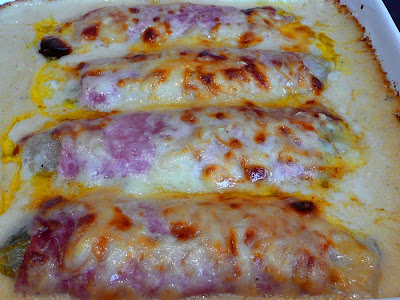 When the endives are tender, put them in a baking dish and spoon some of the cheese sauce over them. Actually, put a spoonful or two of sauce on the bottom of the pan before you put the endives in, so that they won't stick. Sprinkle some grated cheese over the top for good measure, and put the pan in a hot oven for a few minutes until it turns a golden brown.

As an extra touch, you can roll each braised endive up in a slice of jambon de Paris or slices of smoked turkey or chicken before you put them in the pan. Then spoon on the sauce and top it with melted cheese. Now it's a full meal, with meat, vegetables, and cheese.

Here's a post with more pictures and with links to other posts about cooking endives. 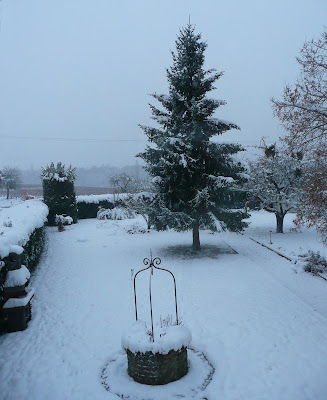 Here's a big photo — click the image twice to see full size —
that I took about five minutes ago out the back window.

P.S. It snowed again overnight. I had intended to take the car out yesterday and go to town, but I thought better of it after my walk with the dog. It's just too icy out there. Now I have to decide whether to venture out today, but it snowed again overnight. It's snowing right now, in fact, and it's really coming down. I'm starting to get cabin fever but I still don't feel like going out in it.

Here's a link to the weather map showing the snowy areas — the north coasts of Brittany and Lower Normandy, along with the whole center of the country.
Posted by Ken Broadhurst at 08:35