Poulet au vinaigre is a movie made by Claude Chabrol in 1985, with a cast including three of my favorite actors: Jean Poiret (of La Cage aux Folles fame), Stéphane Audran (Babette in Babette's Feast), and Michel Bouquet (who's been in so many great French films — starting in 1947).

But poulet au vinaigre is also a distinctly French recipe that they say comes from the country's gastonomic capital, the city of Lyon. It is "chicken with vinegar" — and I do love vinegar. Vinegar is a North Carolina staple. We eat cucumbers, tomatoes, beets, and other vegetables in vinegar as side dishes or garnishes to big meals. 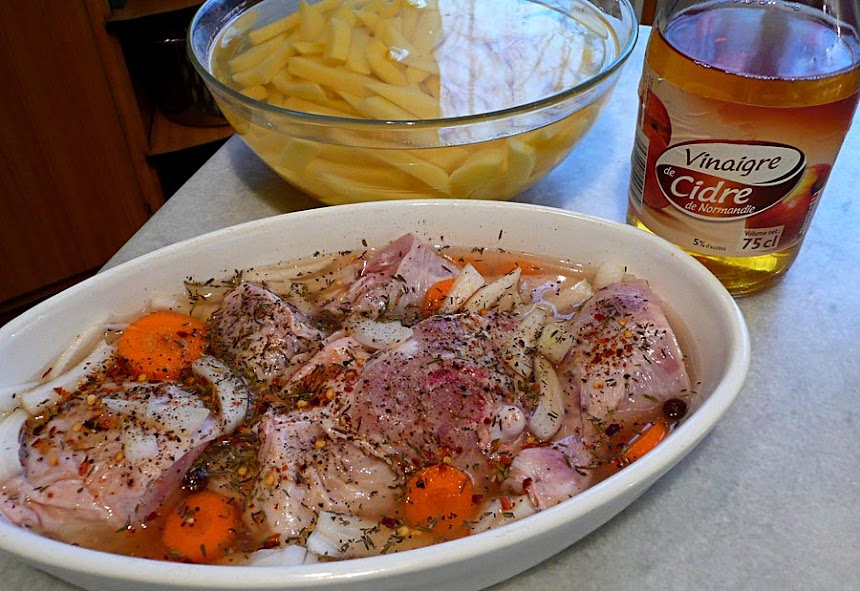 Marinating the chicken pieces in white wine and vinegar,
with onions, carrots, and herbs, is an optional first step.

And in France, how can you eat salads without loving vinaigrette dressing? For me, vinegar is a requirement with fresh oysters too — vinegar with chopped shallot and coarsely ground pepper is a mignonnette sauce that is my favorite with oysters on the half shell. Others prefer lemon juice, but not me.

Besides, vinaigre is made from vin — that's wine. And you wonder why I like it.... 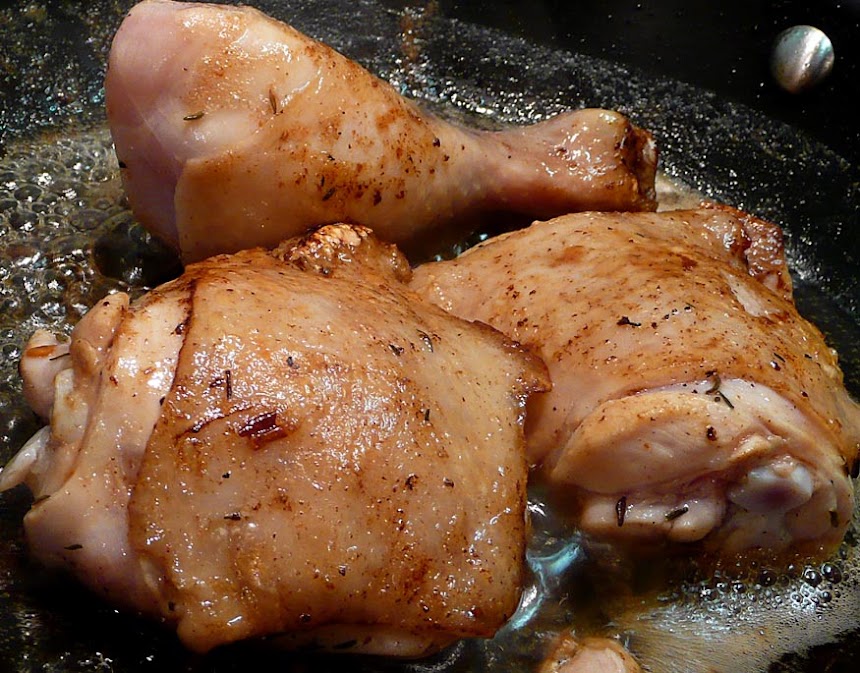 While the chicken pieces are browning, splash some vinegar
on them to tenderize and flavor them.

So poulet au vinaigre. Yes, it's chicken with a vinegar sauce. But the title of the Chabrol movie is also a kind of joke. Poulet in French slang means "policeman" or "cop" — and not at all what "chicken" means in English. The main character in the Chabrol film is a detective who is also a gourmand — he loves good food.* As in most French movies, many of the scenes show him in restaurants, eating. So poulet au vinaigre was a good title, since it's good food.

What is it, then? Well, it's what is called a sauté. You sauté the chicken (or, in other recipes, pork, beef, veal, turkey, or rabbit) until it is browned. Then you add a liquid — water, wine, broth — and things like onions, garlic, mushrooms, or carrots to the pan and let everything cook all together. The difference between a sauté and a fricassée is that for the former you brown the meat first, but for the latter — the fricassée — you don't. A fricassée is like a blanquette in that sense. 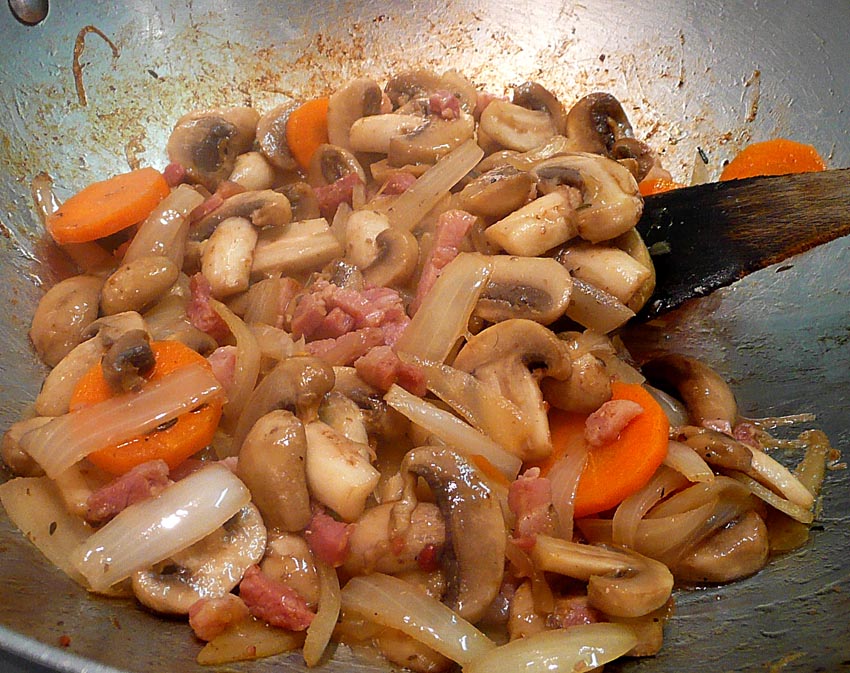 In France, they say we should eat servings of five vegetables
or fruits every day. So I put mushrooms, onions, and carrots
in my sauce. That's three in a single meal. Add salad.


A coq au vin is a kind of sauté. So is a bœuf bourguignon. Well, both of those cook longer than a chicken sauté, but that's because they are made with tougher meat. Otherwise, the process is about the same. Herbs — parsley, thyme, bay leaf, tarragon, rosemary — and aromatics — onions, shallots, garlic, carrots — can make a big difference in the flavor.

For flavor, as well, the liquid you add to the pan to make a sauce, after the meat or poultry for a sauté is... well, sautéed ..., is often wine. It can also be cream, tomato sauce, chicken or vegetable broth, or it can be a combination of all of the above. And it can include vinegar, for a distinctive taste.

Poulet au vinaigre, donc. It's not pickled. It just has a nice tang, an acidic note.

The basic method calls for sautéing pieces of chicken — legs and thighs, for example, or whatever you want, remembering that white meat can get kind of dry — in butter or oil or both. You take them out of the pan and sauté some onion, garlic, carrots, and mushrooms in the same pan. Then you sprinkle flour over the vegetables and stir it in until the flour is lightly cooked, and you add liquid.

In this case, the liquid is ½ to ¾ cup of vinegar (in all) and 1 cup of white wine. Add herbs and spices — black pepper, allspice, hot red pepper, bay leaf, salt of course — and let the liquids and spices cook with the vegetables until you have a nice thickened sauce. Add a couple of tablespoons of tomato paste or sauce for color and, optionally, a couple of tablespoons of cream for richness. A tablespoon of Dijon mustard can also be a good addition. Here's the recipe: 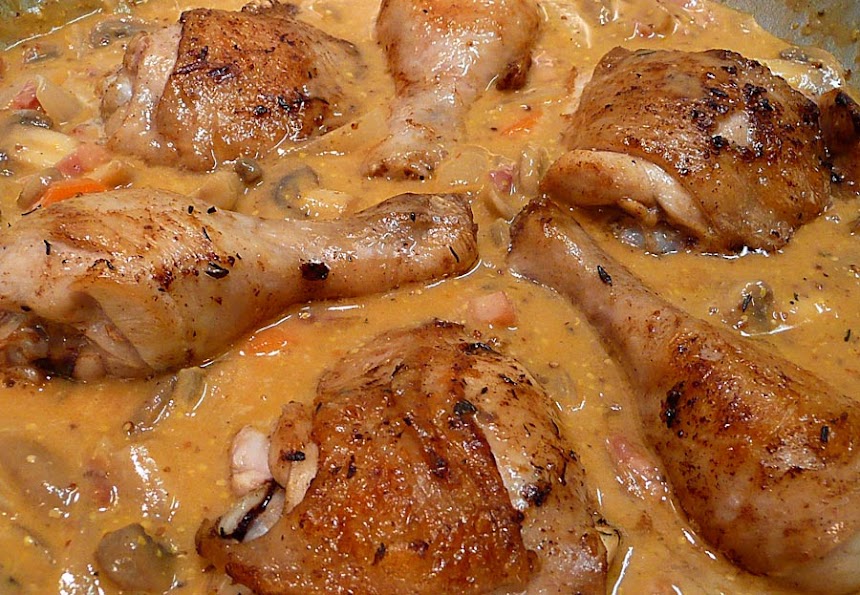 Brown the chicken pieces in butter or oil. Sprinkle some vinegar on them as they cook. Season with salt and pepper to taste. After about 10 minutes, take the meat out of the pan and keep it warm in the oven.

Sprinkle the flour over the sautéed vegetables and stir well until it is absorbed. Add the mushrooms back into the pan and stir again.

Pour on the vinegar and white wine. Stir well, scraping the bottom of the pan with a wooden or plastic spatula. Add the herbs and spices and let the sauce cook and thicken for 5 minutes. Add the tomato paste or sauce, along with the optional cream and mustard, and wine or water as necessary for consistency.

Then put the browned chicken back into the pan. Cover it, and let it cook for as long as 30 minutes on low on top of the stove or in a 300ºF/160ºC oven, until the chicken is as done as you want it.

When it's cooked, taste the sauce. Thin it with more vinegar (to taste) or with white wine or water. Serve with rice, potatoes, or pasta.

One of the most famous chefs who has made a specialty of poulet au vinaigre is Georges Blanc, whose three-starred restaurant near Lyon is called La Mère Blanc. His recipe leaves out the cream and mustard, and that's fine, but I think it's better with them. Everything in moderation... but don't leave out the vinegar.

Other recipes for poulet au vinaigre that I've seen include only chicken, vinegar, water, onions, and flour for thickening. That's very simple. In many fancier French recipes, you would cook the onions, carrots, garlic, herbs, etc. in the sauce and then strain them out and discard them. Then would you add the sautéed mushrooms or bacon to the sauce. I like the rustic style better myself. I don't throw anything out. 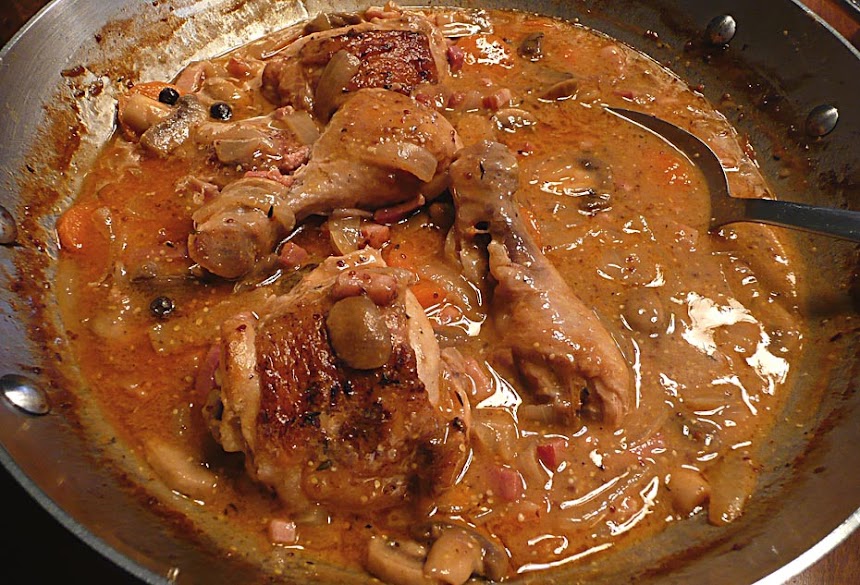 You can serve the chicken and sauce
right out of the pan.

I think poulet au vinaigre would be really good made with red wine instead of white, along with balsamic or red wine vinegar. That's what I'll do next time Looking at the recipe, you might also find yourself thinking: "Needs (more) garlic!"

I've looked through all my cookbooks and I've found only a very few recipes for poulet au vinaigre. Two are American. Jacques Pépin has one for "Sautéed Chicken Legs with Garlic Slivers and Balsamic Vinegar" in his book Simple and Healthy Cooking (1994). A man named Michael Roberts from L.A. has one in his book Parisian Home Cooking (1999) — it calls for a big boiling hen, aged red wine vinegar and aromatic vegetables including celery — plus "2 chicken feet, ½ calf's foot, or 1 pig's tail"! It's probably good... if you can get one of those ingredients.

* There's another French movie called Tendre poulet with Annie Girardot and Philippe Noiret. It is a comedy that's also about a cop — a hard-nosed policewoman.
Posted by Ken Broadhurst at 08:04