Walt wrote this morning about our trip to the market in Montrichard yesterday. It was cold and it was snowing big flakes, but there was really no snow on the ground. There were fewer vendors than usual, but there were plenty of shoppers. 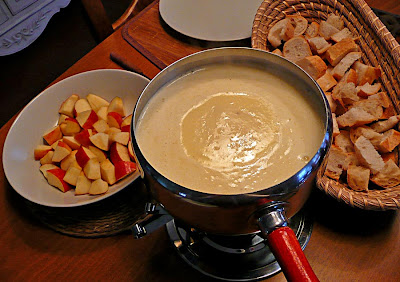 Here's the Christmas Eve fondue with Auvergne cheeses.
They are electonic scales, the kind where you enter the price per kilogram and set the product on the scale to weigh it and calculate the price. The people staffing the stand were lost without them, and there was quite a bit of resetting, watching the scales go through their reboot processes and self tests, and, I have to say, quite a bit of grumbling and cursing too. 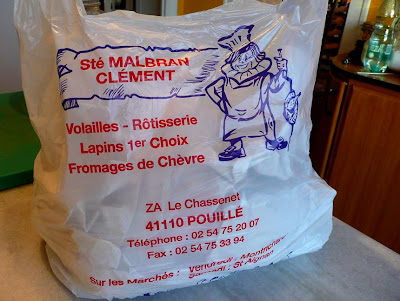 The vendor we buy poultry from is the Société Malbran-Clément,
with its processing facility in the village of Pouillé
between Saint-Aignan and Montrichard.
Finally one scale started working again so things could start moving forward. The woman in line behind me looked at me and said: « Je pense que ça va être gratuit aujourd'hui. » — I think it's going to be free today. I told her: « Oui, mais c'est Noël, après tout ! » — Yes, but after all, it is Christmas!" 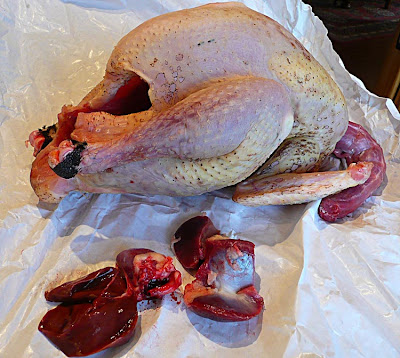 Here's the turkey, freshly butchered and prepared for roasting.
Along with the turkey — 3.5 kilos for about 25 euros — I bought a pound of fresh chicken livers to put in the stuffing (cornbread, sausage meat, livers, onions, celery, and green pepper). Despite the cursing of the scales, everybody was in a cheerful mood. The people we buy poultry from are local, do their own processing and prepping, and have very fine products. 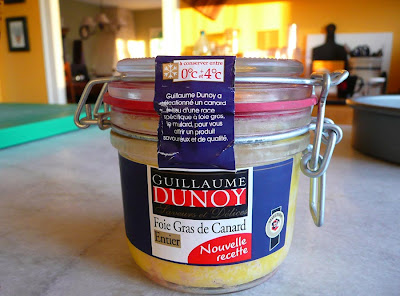 Duck foie gras — it's the whole liver
cooked with wine and seasonings.
The other thing we're having for our Christmas dinner, besides turkey, cornbread stuffing (which is not French but which I love), Brussels sprouts, and pommes dauphinoises, is some foie gras. That's the liver of a fattened duck or goose. 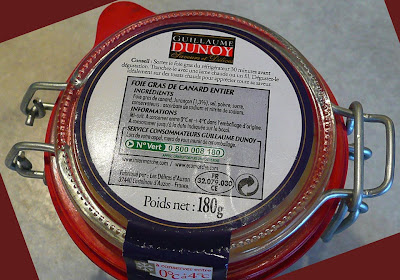 This liver is cooked with a little Jurançon wine
from down near the Pyrénées.
Ours is duck liver foie gras. They sell tons of it here at Christmastime, and I'm sure France must be the country in the world where the most foie gras is consumed. We'll have it as an appetizer before the turkey and trimmings. We'll spread it on toasted pain d'épices, a kind of ginger bread or spice bread made with honey and spices. 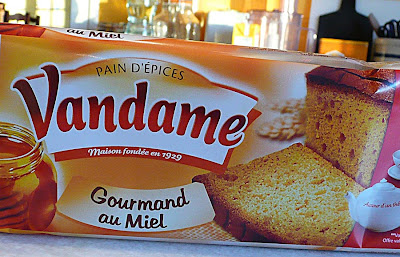 Pain d'épices, a French specialty
That might sound strange — duck liver on ginger bread — but that's what you have with foie gras: something sweet. Not cloyingly sweet, but sweetish. It can be figs, or prunes, or other fruit, raw or cooked. It can be the pain d'épices. Or it can be a sweet white wine like Sauternes, Montbazillac, Vouvray, or Alsatian Gewürtztraminer.

Okay, I have to go prepare the turkey and stuffing for the oven now. We trimmed up the Brussels sprouts and cooked some potatoes for the pommes dauphines yesterday, so we got a head start. I cooked cornbread — cornpone, actually — day before yesterday so that it would have time to dry out some. And I made the cornpone using some duck fat rather than butter, because I thought that would go well in the stuffing.
Posted by Ken Broadhurst at 09:39