First I fell in the stairway and sprained my ankle. Then the good weather went south and we had, first, a long period of steady rain, and now a long period of repeated snowfalls and freezing temperatures. Then my glasses broke — both pairs. To top it off, the car unexpectedly flunked its biannual inspection because the front tires were found to be too worn. 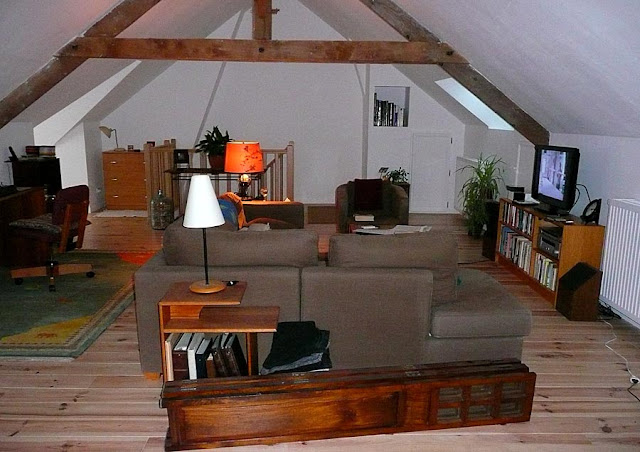 The loft space
is still a work in
progress.


And now, here's an update on our upstairs room, the one we had finished from scratch last spring and summer. First of all, let me say that I love it. We both do. It's comfortable, spacious, nice-looking, light, and convenient. I was not sure I would like the floor — pine boards — but I do. The wooden staircase is handsome and solid. The heat works great, and the expensive radiators are attractive and efficient.

So much for the positives. There have to be some problems, right? Well, there are, and the major one is our own fault. We first noticed it in November, when the weather was blustery and damp. When we have strong winds here in the Loire Valley, they almost always come from the west, so that's the side of our house that takes the brunt of the weather.

The west side of the upstairs room includes a long, low closet — the entire length of the room, which is 11 meters, or about 35 feet. There are four doors that give access to the closet space. We have some shelving units in there for storage, and we figure we can use the rest of the storage space for all kinds of things, from boxes of books, old 35 mm slides, clothes, electric fans, the vacuum cleaner, and on an on. 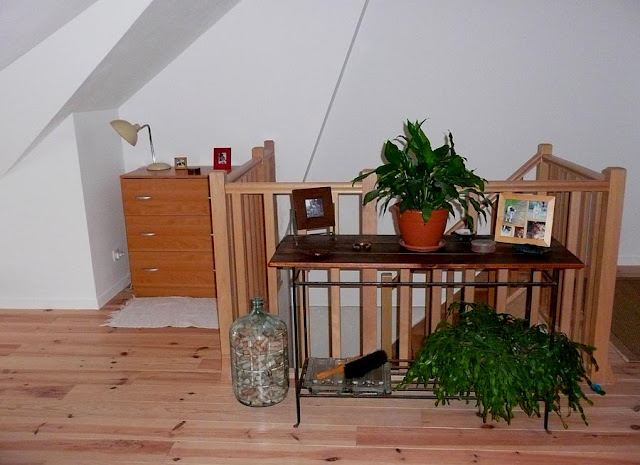 The railing
around the
stair
opening.


The closet doors are held shut by some of those puny magnet closures that aren't very powerful. The inside of the closet is unfinished. It's plasterboard (sheetrock) and the seams and joints in the wall are not sealed. Why not? Because when Jacques the contractor asked us whether we wanted the plasterboard inside the closets taped and 'mudded', we said: "No, don't bother. Nobody will ever see in there anyway."


That was the mistake we made. In November, on one particularly windy day, all of a sudden the four closet doors on that side of the room all blew open! A strong draft was coming into the room through the joints in the plasterboard inside the closets. It was strong enough to defeat the little magnetic door closures. The 20 cm of insulation behind the plasterboard was not enough to keep the draft out.

At first it seemed funny. Like we had ghosts, with doors suddenly popping open. It wasn't really cold outside, so the draft blowing into the room wasn't cold either. Being up here wasn't exactly like sitting in a wind tunnel — but we knew we had a problem. I called Jacques and a few days later he came over to talk about it. He told us two things. These two, if I understood correctly: He said he'd send a crew over to seal the joints and seams inside the closets. He asked if that would involve moving a lot of stuff, and we told him no, not at this point. 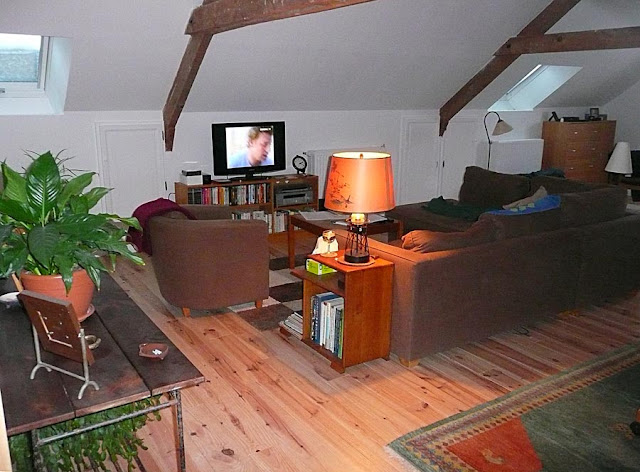 Here you can see two of the closet doors that kept blowing open.

He also told us that his entreprise has filed for bankruptcy. In other words, I assumed, he was ready to retire, to get out of the building contractor business. I may have misunderstood what he was saying. We waited for the crew (two young guys) to show up, but they never did. Days passed. It started snowing. The roads were icy. The weather was cold.

But there was no wind. Therefore no draft blew into the upstairs room. We waited patiently, and I considered calling Jacques again but never did it. The crew probably wouldn't have come out in the bad weather to do a free repair anyway. If there still was a crew. And I assume that there would have been no charge for the work. Anyway, as long as there was no wind, there was no problem.

And then two or three nights ago a strong weather front blew through Saint-Aignan from the northwest, bringing strong winds and a mix of rain and snow. The closet doors in the loft blew open again and, worst of all, the temperature in the room rapidly fell from about 19 to 14ºC. At 19ºC (about 66ºF), I'm comfortable. But 14ºC is only 57 in farenheit. That's chilly when you are sitting still.

So for the last two days Walt has been insulating the closets using putty and, as necessary, pieces of cloth that he sticks into the wallboard joints where they are too wide to make puttying practical. And it's working. It was very windy last night and again this morning — another front is moving in off the North Atlantic this weekend, bringing rain this time around Saint-Aignan but snow just north of us in Brittany, Normandy, and the Paris region. However, we're not feeling any draft. The temperature in the room is staying steady.

There's still some calfeutrage to do (calfeutrage = "draftproofing" according to the French - English dictionary). We will gradually find all the places where cold air is seeping in and get them filled, one way or another. 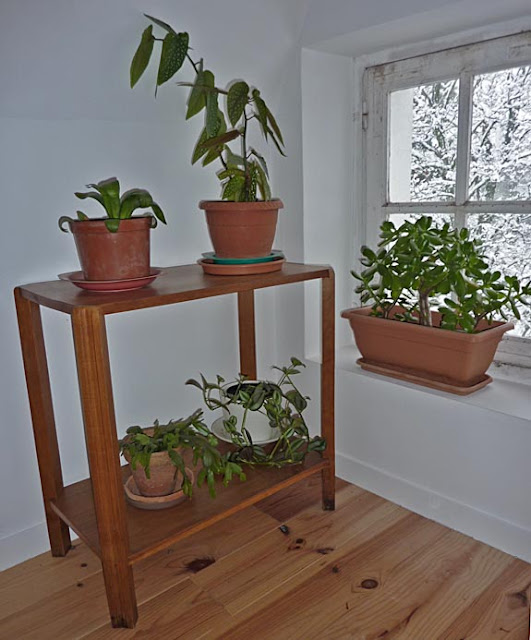 The old windows
are fine but will
need to be painted
and re-caulked.

A piece of good news: the two previously existing windows up here in the loft seem fine. They're not drafty at all, despite the fact that they are probably more than 40 years old. Now that we know that the old windows are keepers, we'll take them down next summer to paint the frames and put some fresh caulking around the panes of glass.
Posted by Ken Broadhurst at 08:19