As I've said, ever since the SuperU store in Saint-Aignan started selling packages of chicken wings — or ever since we noticed them — we've really been enjoying them at lunchtime. They're not very expensive and they are good finger food, whether for an American-style, eat-it-with-your hands meal, or as an accompaniment to the inevitable glass when you have people over for a visit.

This recipe is a variation on Buffalo-style wings. We've made those other times, different ways, but they can be a little messy to eat, because often the wing sections are first dredged in flour and then baked or deep-fried. Finally, they are coated in a hot red-pepper sauce. The sauce really sticks to the crust on the wings that way, and then it sticks to your fingers when you eat them. 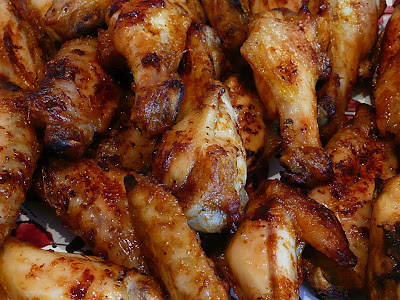 Baked chicken wings with a hot red-pepper sauce
For this version, you don't need any flour. Just put the wing pieces — about two dozen of them, both drumettes and flats — in a bowl and pour in a little bit of vegetable oil. Toss them to coat them in the oil, and then salt and pepper them.

Put them on a rack or on a silicone baking mat on an oven pan and bake them in a 350ºF/180ºC oven for about 30 minutes. Or cook them on the grill outdoors if you can.

While the wings are cooking make a sauce using equal quantities of melted butter and hot red-pepper paste. Three tablespoons of each will make a fairly mild but spicy sauce. Use more pepper paste for a hotter version. Also, add a tablespoon of vinegar to the sauce unless your red pepper paste or sauce (Tabasco or other Louisiana hot sauce, for example) already has vinegar in it, and a dash of Worcestershire sauce. Taste the sauce to see if it's to your liking.

Put the partially cooked wings back into the bowl you used earlier and pour on the sauce. Stir them so they're well coated and use tongs or a fork put them back in the oven or on the grill for a second cooking. If there's sauce left in the bottom of the bowl, you can brush the wings with it as they cook for another 10 to 15 minutes. 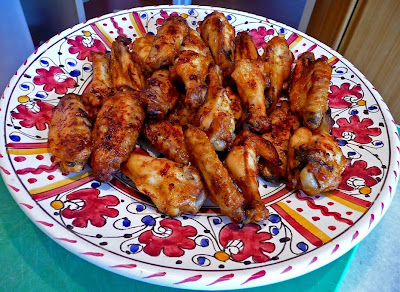 A platter of wings for lunch or apéros
When they're done, chicken wings made this way are not especially greasy or sticky to the touch. They are good finger food because they don't get your hands too messy — and because they taste so good.

Here's another idea for chicken wings: Yakitori de poulet. You could use the same method to do them. Just vary the sauce.

And here's a link to some pictures and a recipe for the classic way of making and serving Buffalo-style wings that Walt posted last year.
Posted by Ken Broadhurst at 07:26