Last night I watched the news/interview program called Le Grand Journal on the French Canal+ TV station. The guest was the ministre des Finances, a woman named Christine Lagarde. She was born in Paris and educated in France, but she also graduated from a high school in the Washington DC area and spent many years as a member of a big law firm in Chicago and some years in a DC think tank (pronounced [teenk-tawnk] in French, LOL).

Madame Lagarde was cool, glib, earnest, and well informed, as always. What I noticed about her, however, was her French pucker. To speak French like a native, you have to purse your lips rather tightly when you say a lot of vowels and words. French is spoken sur le bout des lèvres — with your lips in a round pucker. American English is pronounced in a slack-jawed — or at least relaxed-lipped — kind of way in comparison. 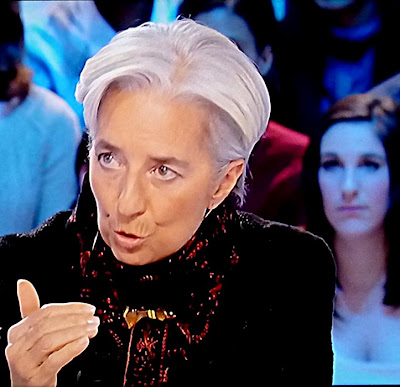 Christine Lagarde showing us her vertical lip lines.
One phenomenon I've noticed and that I've attributed to this puckered-lips posture that speaking French requires has to do with lip wrinkles. French as it is spoke in France, I mean. Often when you look at French women, especially, as they are talking, you'll see that they have vertical wrinkles or lines on their upper lip, in in the space between the nose and the lip itself. I haven't noticed it as much in men. 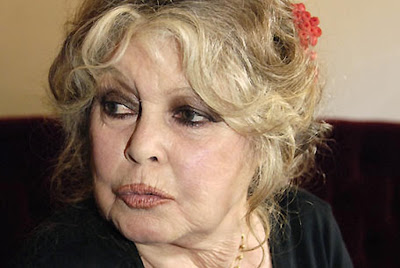 A recent photo of Brigitte Bardot that I found here.
Same lines, if you look closely.
My take on it is that it's the pucker that causes the vertical upper-lip lines. I wondered for a long time if anybody else had ever noticed or thought about this phenomenon. Then one day a few weeks ago, another American expatriate mentioned it to me. Her analysis of the causes of the lip wrinkles differed from mine, though. She said: it's from years of smoking — holding the cigarette between your puckered lips and sucking in the smoke. It's true that that could be a contributing factor. 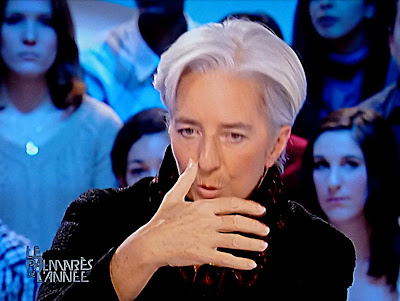 I don't think Mme Lagarde was trying to hide her upper lip...
I have no idea whether or not Mme Lagarde smokes or used to smoke cigarettes.

But she does have the lip lines and the pucker. The pucker is not optional for speaking French, really. You have to hold your lips very tight and not be afraid to exaggerate the rounding of them to pronounce certain common vowels. Just take the pronouns tu, nous, and vous. Pronouncing them correctly requires what can seem like labial gymnastics to Americans (and probably other speakers of English). 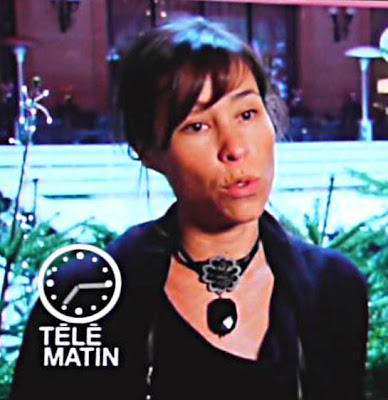 Here's a much younger woman talking
on the TéléMatin show this morning.
As for the weather, we seem to have gotten a dusting of snow overnight. I have peered out into the darkness to see what I can see, and there's definitely some white stuff out there. It was raining heavily when I went to bed at about 10 p.m. At least it sounded like rain. It must have snowed later. At the same time, the temperature is slightly above freezing.

Walt and I have talked about it and we are convinced that MétéoFrance, the French national weather forecasting service, is now exaggerating its forecasts to make sure it doesn't get blamed again for failing to predict significant snowfall. That's despite the fact that the service did predict last week's four to six inches of snow in the Paris region. Because the prime minister criticized weather forecasters on that one, they are covering their derrière very carefully now. 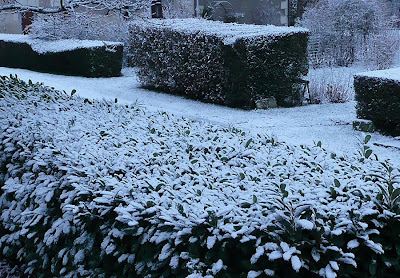 Looking out the kitchen window a few minutes ago...
P.S. 10:30 a.m. — it started snowing again and it's coming down pretty heavily. Walt had an appointment to get his hair cut and he decided to keep it. I went out and inspected the front tires on the Peugeot and I have to say they are not nearly as worn as the CT guy said. They are far from bald or slick. I'm biased (but the tires aren't — they're radials LOL) but I don't think they're too bad. Of course, if this kind of snowy weather continues through the winter it will be better to have new tires now rather than waiting until next summer.
Posted by Ken Broadhurst at 08:15