I approached turkey blanquette with a certain measure of skepticism. I thought the white meat of the turkey would be dry and stringy compared to the gelatinous, succulent, tender pieces of veal that go into blanquette de veau, which always figures at the top of the list of traditional dishes that French people enjoy.


In the supermarkets here in France they sell turkey especially for blanquette, and just to make sure you recognize it they call it blanquette de dinde right on the package. The pieces in the package are the first section of the turkey wing, the one closest to the body and with the most meat on it. It's white meat but probably less dry that turkey breast.


I bought some last week when it was on sale for 2.50 € a kilogram. Even though a lot of what you are paying for is bone, that's a very good price. In our situation, we can cook the wings, strip the meat off the bones, and then save the the skin, fat, and cartilage as a treat for the dog and cat. Nothing is wasted except maybe the one big bone per wing, but even those cook with the meat to make a very flavorful, rich broth. 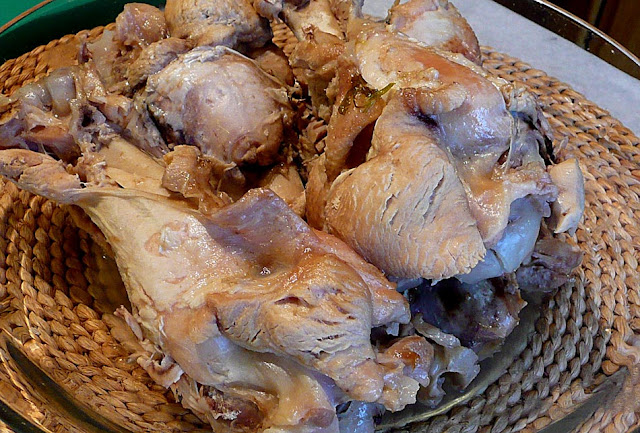 Turkey wings cooling after cooking for three hours in
water and white wine, with aromatic vegetables and spices


The package of blanquette de dinde that I bought contained four big wing joints and weighed just over a kilogram (or about 2½ lbs.). I put them on to cook the way I would cook veal shoulder to make a blanquette — that is, in cold liquid that is about one-half water and one-half dry white wine, and enough of it to cover them amply. Into the water go some leek tops or a big onion, 4 or 5 carrots, some parsley stems, a couple of bay leaves, some black peppercorns, and some allspice (Jamaican pepper) berries. And salt of course. Then bring it all to the boil.


The turkey wings cooked with all those flavor ingredients for about three hours, at a very low simmer. They made a delicious broth, and the meat was starting to fall off the bone when I took it out of the liquid to let it cool. 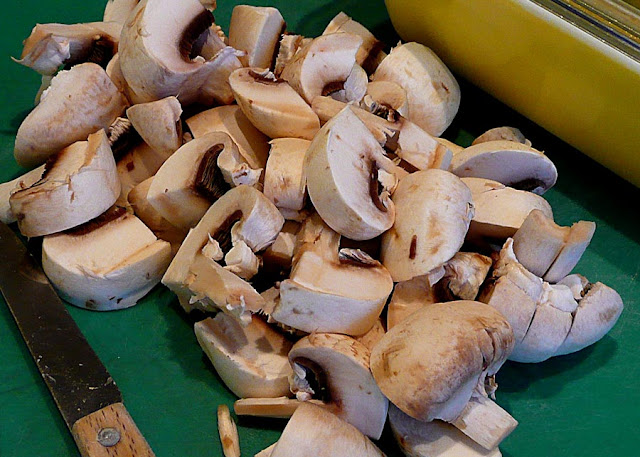 Sliced mushrooms — I usually buy big mushrooms rather than
small ones because they are easier to clean and taste the same.


While the turkey is cooling, sauté some chopped onion and sliced mushrooms in a little bit of butter. You can add a quarter-cup of the turkey broth to the frying pan. Instead of chopped onion, you can use pearl onions, for a fancier presentation. Rehydrated dried mushrooms could replace fresh ones. 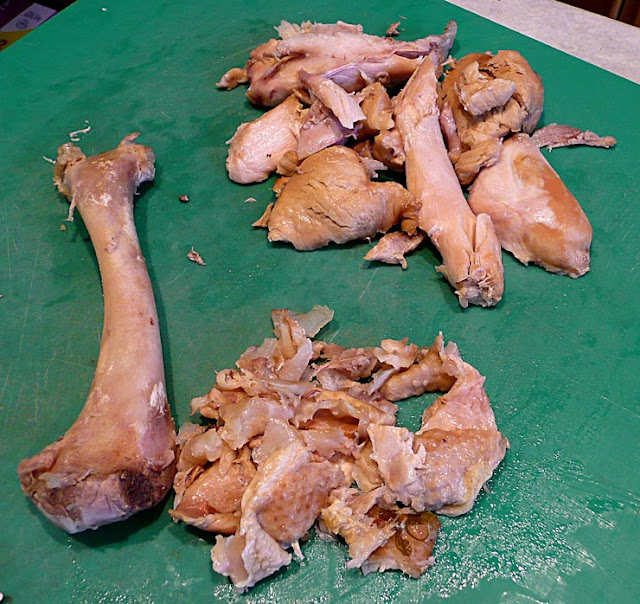 Take the turkey meat off the bone and
set the skin and cartilage aside for the dog or cat.


Let the turkey wings cool until you can easily work with them using your fingers. Pull the nice white meat off the bones, leaving it in big chunks as much as possible. Save the skin and cartilage for your dog if you have one. Or cat. Discard the bones — there's only one big bone per wing. I eneded up with about 600 grams of turkey meat, or a little less than 1½ lbs.


Strain the sauce and discard the flavor ingredients (with the possible exception of the carrots, which I usually keep and put into the finished sauce). With the broth, make the cream sauce. If you are lucky, you'll have plenty left over to make a soup or other sauces. 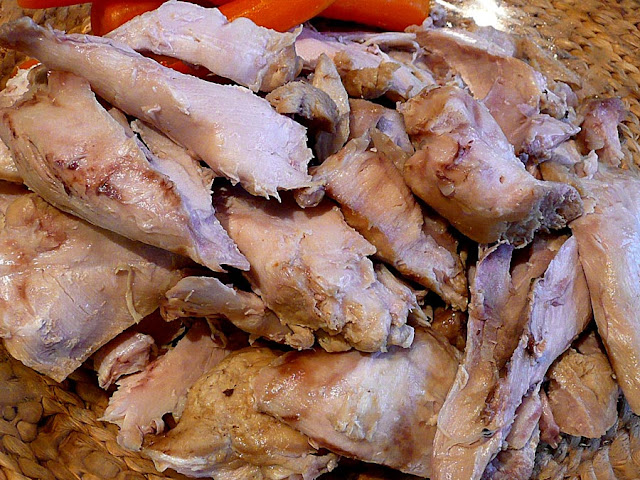 
The sauce is the broth thickened with a roux and enriched with cream. Make the roux by melting about two tablespoons of butter in a saucepan. Then add two tablespoons of flour to the pan and stir it around so that it absorbs the butter and cooks on medium heat for a minute or two. Don't let it brown — blanquette in French derives from the word blanc, meaning "white," and you want the sauce to be as white as possible.


Start pouring the turkey broth into the roux slowly, stirring all the while. Pour in about a cup to start with. The sauce will thicken and start to bubble on the heat. While it is still very thick, pour in a cup of cream or half & half to whiten and enrich it. Then add more broth until you get a sauce as thick as you judge it ought to be. It should not be gloppy, and it should easily coat a spoon dipped into it and pulled back out. The thickness of the sauce is a matter of taste, really. 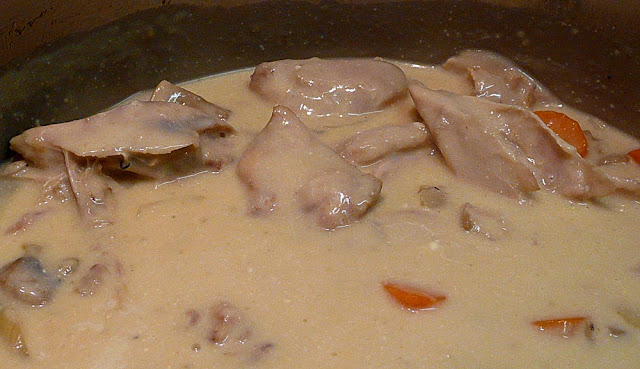 The boneless turkey meat, along with mushrooms, onions,
and carrots, cook for a few minutes in the blanquette sauce.


Now add the chunks of cooked white turkey meat to the sauce, along with the carrots (if you saved them), as well as the mushrooms and onions you cooked while the turkey wings were cooling. Let everything cook on low heat until the sauce is bubbling again. At the last minute, squeeze in some lemon juice to perk it up.


We had the blanquette of dinde with steamed rice on Sunday. It would also be good with noodles or pasta, or with boiled or mashed potatoes. You could always serve some green beans or Brussels sprouts with it. And yesterday, with the leftovers, we decided to have French fries. That was really good. The sauce was as good with the fries as it was with the turkey and mushrooms. 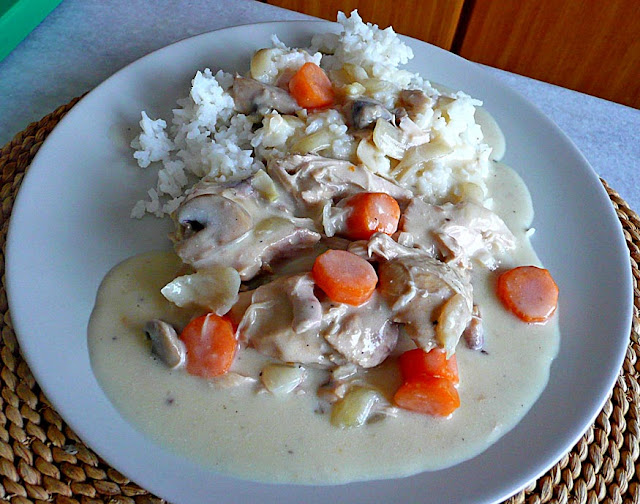 Blanquette might not be the most photogenic of dishes,
but it is one of the most comforting.


And by the way, the turkey meat was not dry or stringy. Normally when I cook veal for a blanquette I simmer it for two hours. I let the turkey wings cook for three. The turkey meat was not as succulent as good veal, but it wasn't bad at all. And turkey is easier to find in many places outside France — not to mention that it's more affordable. This would also be good made with turkey thighs, or with chicken thighs and/or drumsticks.
Posted by Ken Broadhurst at 09:39