Saint-Aignan on a cold Saturday

For the first time in a while, the low temperature was above freezing this morning. It was all of +1ºC, so Mother Nature was not going overboard with her generosity. However, the snow is melting... slowly.

The weather was bright and sunny yesterday morning. Today, skies are gray and it's supposed to start raining by noon. It will be a cold rain, and it's going to make for a sloppy mess outside. I'm staying in — except for the obligatory sortie with the chien this afternoon. 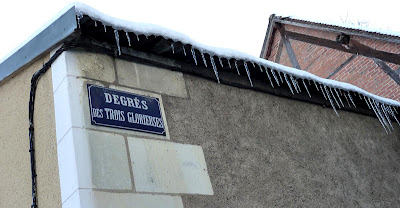 A Saint-Aignan street corner, with icicles
Yesterday I made a quick run down into Saint-Aignan to go to the pharmacy (just daily meds, no illnesses here right now). The drive down the hill, which I took very slowly and deliberately, was fine, even though the roadway was covered in a thin sheet of iciness. The bigger road down along the river was clear, and there was little traffic. 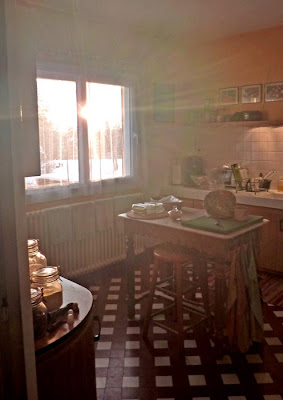 Rays of sunlight streaming into our kitchen
yesterday morning
The hard part was getting the car out of our driveway. I backed it out of the garage, turned around, and slowly moved toward the front gate and the road. There's a slight rise in elevation involved. As it turns out, there was also a little ridge of hard-frozen snow in the way, just outside the gate, along the edge of the road. The tractor that the village has sent to keep the road clear this week had piled up snow in front of our gate.

And the car couldn't make it over. I floored it, and the front wheels started spinning wildly. Problem was, I and the car were making no forward progress. Instead we were sliding sideways, toward a concrete fence post and a ditch. I thought better of stepping down any harder on the gas pedal. 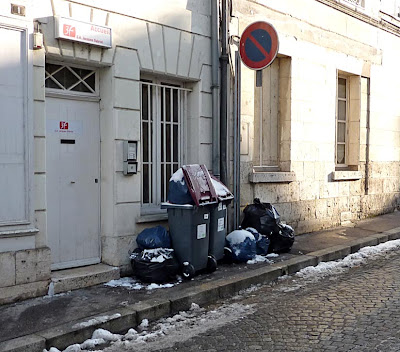 Bad weather has disrupted regular garbage collection.
Trash is piling up in Saint-Aignan.
Walt was upstairs running the vacuum cleaner, so he didn't hear all this happening. I thought I remembered that we had a bag of sawdust in the garage, so I went to look for it. I figured that if I poured some sawdust onto the snow in front of the two front wheels, I might be able to get enough traction to make it over the snow bump.

(In France, a speed bump is called a gendarme couché — a sleeping policeman. This bump was more like a gendarme givré — a frozen policeman.) 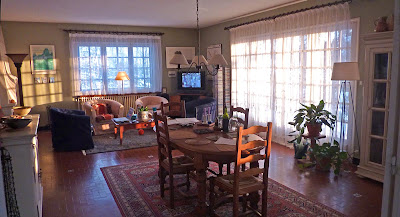 Sunlight filling the living room
For Judy ;^) and for those of you who have visited, so you can see the new look
No sawdust. But look, there's a bag of kitty litter. Perfect. I knew there would one day be some advantage to having a cat living here. Besides the affection and entertainment, I mean. Back outside, the litter did the trick and the Peugeot and I were soon out on the road and on our way down the slippery hill. 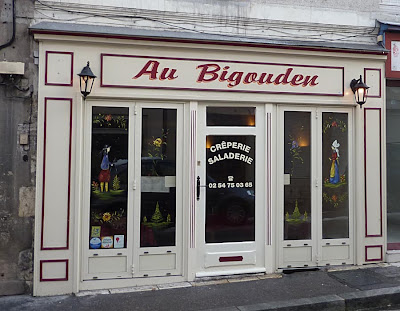 The crêperie in Saint-Aignan looked like it was getting ready
to open for lunch. A crêpe sounded really good right then.
At the pharmacy, a customer came in and starting chatting with the employees, just as I had. She said she had parked her car in the big new parking lot on the east side of the old town. There were so few cars in the lot, she said, that suddenly she thought maybe it wasn't market day after all.

Or maybe the market had been canceled because of the bad weather. But no, the market was set all up and most of the vendors were there. Only the customers were missing. There weren't many customers at the pharmacy either.

It's hard to believe it was only a week ago today that the first real snow fell. It seems like a month. This has been a long week.
Posted by Ken Broadhurst at 08:57