We received a delivery of firewood yesterday. With all the cold weather we were having, it didn't seem like a bad idea to have some extra wood to burn — even though we thought we might already have enough to last us through a "normal" winter.

We didn't initiate the transaction, however. Friends did. She's French (Parisian) and he's English. They live in the old part of Saint-Aignan, and they have a couple of fireplaces in their house. Problem is, they don't have any outdoor space where they can store large quantities of wood. We told them they could store it at our house, and went 50-50 with them on the purchase of 7 stères. That's 7 cubic meters, or about 2 cords. 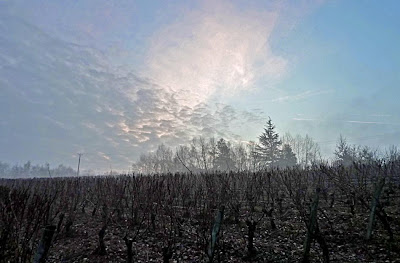 A hazy sunrise this morning

She made contact with a wood seller over on the south side of Saint-Aignan — found him through an ad in one of those free advertising papers — and arranged for delivery on December 29. We held our breath and crossed our fingers that it wouldn't rain really hard that day, or snow. As it turned out, the weather yesterday was almost sunny and the temperature was mild for late December: 7ºC — nearly 45ºF.

She called the seller on Tuesday to confirm everything. Then she called me and said there was no need to call him too « parce qu'il vous connâit. » He knows us? Yes, she said, he has delivered wood to you before, so he doesn't need directions. Oh, then it's Jean-Claude? Yes. Jean-Claude helps our across-the-street neighbors to maintain their property — trimming hedges, clearing undergrowth in wooded areas, and cutting down dead trees. We've be acquainted with him for 5 or 6 years. 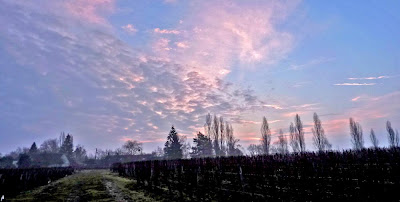 Our hamlet at sunrise today

Jean-Claude showed up shortly before 2:00 yesterday. That was the agreed-upon time. Our friends arrived shortly thereafter, and so did Jean-Claude's son-in-law on his tractor, pulling a trailer containing the two cords of meter-long oak logs. The idea was that the sellers would just dump the wood in our front driveway, or courtyard, or whatever you'd call it, and the buyers would move it to a prepared spot and stack it neatly.

Dumping the wood in the driveway required backing the trailer in through the front gate, which is not all that wide. On his first attempt, Jean-Claude's son-in-law misjudged the distance to the gate post on the right and proceeded to neatly shear off the cast-iron bell we had mounted on the post. It was our "cat bell" and Walt just last summer painted it black so that it resembled Bertie. 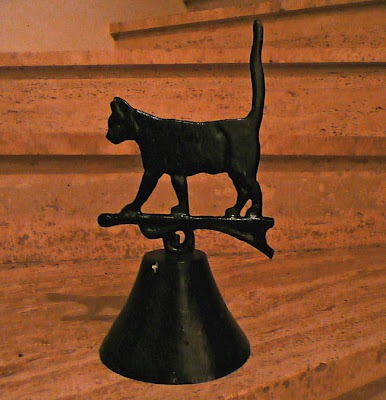 The cat bell is irreparably damaged, we think.

Merde. That was all I could say. And c'est pas grave. What could we do? Maybe the shop where we found the bell in 2004 will still have them in stock. Or something similar. We need a bell out there. There's also an electric one, but there's a bad contact somewhere in the wiring and it's hard get it to ring. Besides, the button is hard for people to find. The cat bell was a lot handier.

Anyway, the wood got dumped, Jean-Claude got paid (320 € for the 7 stères of oak), and our friends and we got busy moving the logs and stacking them up against the north wall of the house, under the balcony. Since our friends had been nice enough to being along a helper, a local man who works with and for them, there were five pairs of hands to do the work.

We debated whether we should set up a "log brigade" — like an old-fashioned bucket brigade to move water. Our friend said it would be « une bonne méthode de translation ligneuse ». We finally decided we weren't organized, disciplined, or coordinated enough to do that, so we just tackled the work by brute force. Each of us would grab a log or two, move it or them to where the pile was, and try not to bump into each other in the traffic muddle that ensued. 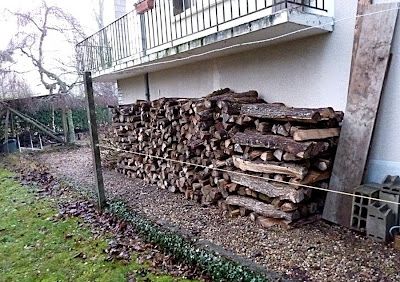 Callie the Collie just sat out in the yard and watched us with an amused look on her face. On pourrait dire qu'elle se fendait un peu la gueule... Too bad she's not capable of splitting logs as well as she can "split her gueule."

In an hour the work was done. We retired to the living room to celebrate, qui with a glass of wine, qui with a cup of tea, as they say in French. It was a job well done, on a day made to order for outside activity.
Posted by Ken Broadhurst at 07:19