Not 29 years old, Walt — far from it. Yesterday was the 29th time we've made his traditional birthday dinner together. The first time, December 21 in 1982, was before we started living together. We had just come back from spending a year in Paris, where we met.

I've told the story before, here. And I've given a recipe for steak au poivre before too, here. 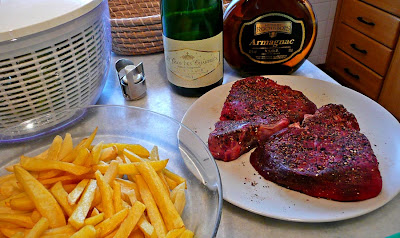 We drank Touraine sparkling wine and made the sauce
with Armagnac, black pepper, and cream.
Yesterday was new-tires day. Since we only have one car, and since there is little if any convenient public transit to get us home from the garage, we took the car in at 9 a.m. and waited three hours for it to be serviced. Oil change, new tires, and all that. It was rainy but not too cold.

The garage is across the river in Noyers-sur-Cher. It's in what passes for a shopping center here: a zone d'activités commerciales (or ZAC). It is not a mall. Besides the garage, two contrôle technique centers, and a Citroën dealership, however, there's a supermarket (Intermarché), a hardware/DIY store (Bricomarché), a café/self-service restaurant, and a store called Facile that sells housewares, hardware, curtains, and other sundries.

Having three hours to spend over there was the perfect opportunity to do something we don't do very often: shop. We fortified ourselves by walking the few hundred meters (say two long blocks) from the tire place to the café and sitting down to drink a big cup of black coffee — un double express — and eat a croissant. We don't go to cafés much any more, and it was almost like being on vacation or in Paris. While we sat and sipped, we browsed through the Intermarché Christmas flyer to see what the store specials were. We needed to buy a couple of steaks and some other things. 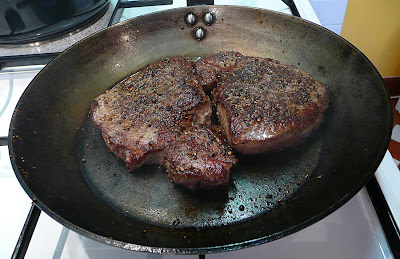 Deux pavés de rumsteak
Then we went and browsed around the Bricomarché store until 10:00, when Facile opened. We looked at closet door hardware (thinking more powerful magnets might be in order for the closet doors in the loft). We looked for what Simon calls "goo" — mousse expansive — but didn't find any. We looked at dog toys for Callie. We looked at lamps and saw two we liked. In short, we killed a half an hour.

We went to Facile and wandered around for about 45 minutes, but finally didn't buy anything except a couple of inexpensive dog toys. We looked at light bulbs (Europe is changing over to fluorescent from incandescent bulbs now and we need to buy some). We looked at curtains. We looked a candles. We spent time examining all the items on sale in the kitchenware department. It was fun. 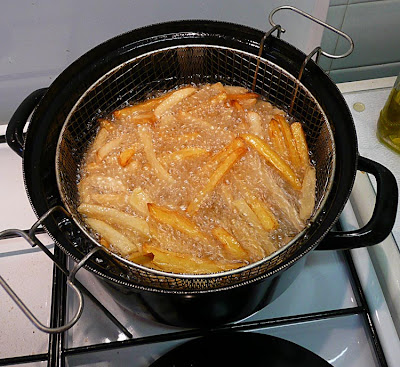 These days, I'm enjoying making frites using fresh potatoes
of the Charlotte variety, which are widely available here.
Then we went grocery shopping at Intermarché. There wasn't much of a line at the butcher counter. We told the man we wanted a couple of steaks cut from the piece called the rumsteak. The butcher there had told us years ago that rumsteack is the best cut for steak au poivre — it's tender and lean, and can be cut thick so you can cook it rare.

The butcher grabbed his knife and cut off two steaks, but they were too thin. I asked Walt if they looked okay to him and I could tell he didn't think so. The butcher looked at us and waited. Finally, I said: "Today's my friend's birthday, so he's choosing. We need thicker steaks." He looked at us and said: "Do you two speak the same language?" Yes, I said, we're Americans. But we live here.

« Vous êtes en famille, n'est-ce pas? », he said as he cut the thicker steaks. Yes, I said. I think he was asking whether we live together. I told him we'd been living here for more than seven years now. He finished cutting the steaks and I apologized for not taking the first two he had cut. No problem, he said with a smile. It was all very pleasant, with no tension or discomfort. The steaks cost just less than 10 euros. 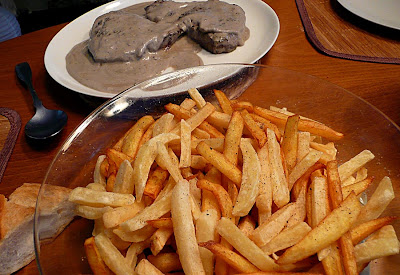 The sauce could have been a nicer color,
but everything was delicious.
We then went back to Bricomarché and bought the two lamps we liked. We hadn't found any nicer lamps at Facile, and we've been looking for lamps for the guest bedroom a while now. We walked back over to the garage with all our purchases and got the car back, with its new tires and fresh oil.

It was a nice morning, and we had a great birthday dinner of steak au poivre, frites, and salade verte. With a bottle of local Touraine bubbly and then some good local Gamay red wine. Here's a link to Walt's post today, in which he explains how we prepared and cooked the steaks.
Posted by Ken Broadhurst at 09:18