The snow is supposed to come back today. Nobody is predicting just how much we might get. But it is very cold again — colder this morning than yesterday morning, when we had a few flurries before the clouds broke and pallid sunlight graced us with an appearance in the afternoon.

I had to go out yesterday. On Saturday, the two pairs of glasses I depend on for reading, and all close work, both fell apart. That morning, I was cleaning the glasses I like the best when the lens fell out in my hand and I realized I had lost the screw that held it in.

No worries, I thought. I have the other pair of glasses and I have some replacement screws and a tiny screwdriver. Walt and I were headed out to the market so I just but the broken glasses aside and wore the other pair. I'd fix the broken ones later. 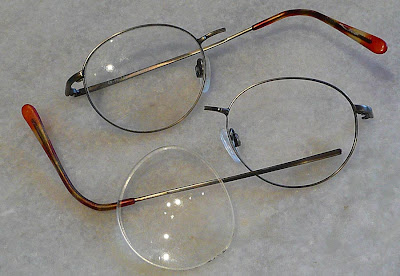 No matter whether you live in France or not,
this is the kind of stuff that happens!
In the afternoon, I was cleaning the second pair of glasses in preparation for trying to put that tiny screw back in the better pair. Suddenly it happened again — the lens came out in my hand and I had lost the screw! Damn. Now I was really in trouble.

I asked Walt if he could fix the first pair for me, and he said he'd try. I went ahead and took the dog out for her walk, because it was starting to get dark. When I got back, Walt said he had tried and tried but couldn't get the tiny screw back into the hole. So I still had no glasses. I would never have been able to do it either, even if my vision wasn't impaired. My fingers are too fat and clumsy.

There it was Saturday evening and I had no glasses. The optical shops in Saint-Aignan and Noyers are closed on Mondays. I was faced with the prospect of being able to do no reading (and no blogging) or other work requiring glasses for the next couple of days. Why do such things (including sick animals) always seem to happen on Saturday evening?

I decided we could rig up a repair using a thin piece of wire (the wire in a twist-tie, with the paper pulled off). Walt was able to insert the wire in the two holes, get the lens in, and twist it tight to hold the whole thing together. I was saved. I could see again. 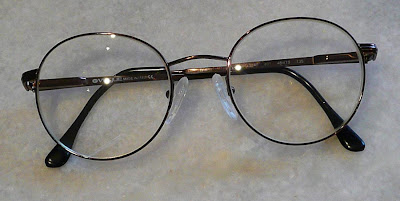 Mes lunettes réparées
Yesterday I went over to Noyers (5 miles away, across the river) to do a few errands (supermarket, hardware store, car inspection) and stopped in at the optical shop with my two pairs of broken glasses. The shop itself was being redecorated, and several workers were taking down old display racks and putting new ones up on the walls. At first I thought the shop was closed for the day. But the optician turned out to be there, and in less than 10 minutes' time he had repaired both pairs of glasses.

I was his first customer of the day so there was no waiting. And there was no charge. I told him I was American and that the glasses came from the U.S. « Ce sont les mêmes vis, de toute façon » he said — the screws are the same.
Posted by Ken Broadhurst at 07:58