The temperature this morning is actually above freezing. Any precipitation we get will probably be cold rain instead of snow, and I'm glad of that. However, they are saying that it will get cold again later in the day and snow overnight and tomorrow morning. 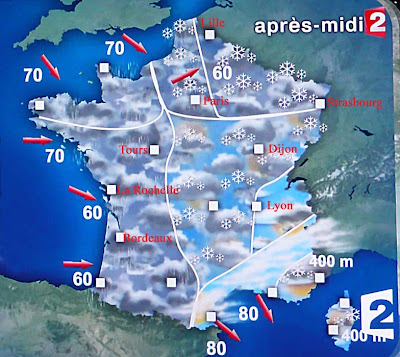 Today's weather map — I added some city names for reference.
Saint-Aignan is about 40 miles east of Tours,
right on the line between rain and snow.
As usual, Saint-Aignan is right on the line between the rain and snow areas on the weather maps. That's the nature of this particular area. We have a semi-continental climate with oceanic influences. And we are at low altitude, so that plays in our favor as far as avoiding snow goes. I'll report on the situation tomorrow morning. (I'm sure you can't wait.) 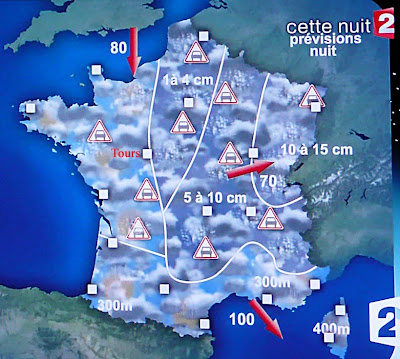 Tonight we'll be in the snow zone, but only for an inch or two.
It's also supposed to snow on Saturday and Sunday.
Meanwhile, one of the things I had to get done Tuesday morning was a car inspection — called a contrôle technique in France. « Contrôle » is one of those French words that looks like an English word, but it has a subtly different meaning. Its first meaning is "inspection, examination, verification." For example, a test given to university students is called (or used to be called — my university days are far behine me) un contrôle de connaissances — a "verification of knowledge."

From there the meaning slides into the meaning of the English word "control" — meaning maîtrise, or mastery, as of your vehicle, for example. Or your temper. Of course, in English we also have "controls" on an experiment to check or verify the results against some standard. Anyway, contrôler is a word you have to use carefully in French.

And are they ever careful when they do a contrôle technique on your car. You have to go in every two years once your vehicle reaches the age of four years, and you have to display a current CT sticker or you can be fined by the police for not keeping your vehicle under contrôle... sorry, inspected. 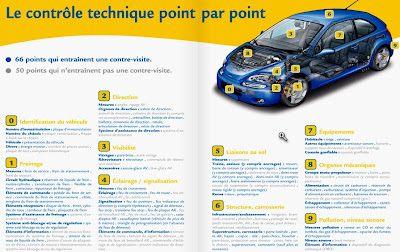 The contrôle technique checklist
for vehicles registered in France.
The list of checks the CT people do includes about 120 items in nine categories, from pollution to brakes, lights, tires, steering, and much more. The company I go to for the CT (and this was my Peugeot's fourth, I think, because the car is now 10 years old) sends me a letter in November to remind me to make an appointment in December.

When you take it in, they drive the car up over one of those pits like the ones they have in oil-change places in the U.S. and they spend quite a while underneath. They have machines that do a bounce test to check the shock absorbers. They race the engine and catch the gases coming out of the tail pipe to see if the car is meeting pollution standards. They tinker and fiddle...

Anyway, it takes a while and for my diesel Peugeot 206 model it costs 70 euros (about 90 dollars). As I said, it's every two years.

How did the Peugeot do? It needs new front tires and an alignment. « Vos pneus avant sont morts ! », the man told me. I knew it was time for new tires in 2011, but I had no idea the front tires were so worn. "You can't see it, because they are worn on the inside," he said. "From the outside they look fine." That's because the front end is out of alignment, he said.

He also said the gendarmes might give me a ticket if they stop me for any reason and decide to look at the tires. Luckily, I don't drive much. And with the snow coming tonight and all through the weekend — if the forecasts are accurate — I certainly won't be out on the road.

So I went to see Dominique at the tire shop and I ordered a set of four new Michelins for the car. He'll put them on next Tuesday. He'll go through the checklist and fix any other minor defects, and he'll do an alignment, which is called un parallélisme in French — the front wheels need to be aligned so that they are absolutely parallèles.
Posted by Ken Broadhurst at 07:08